Vegas took a 2-1 series lead and is now two wins from advancing to the Stanley Cup final. 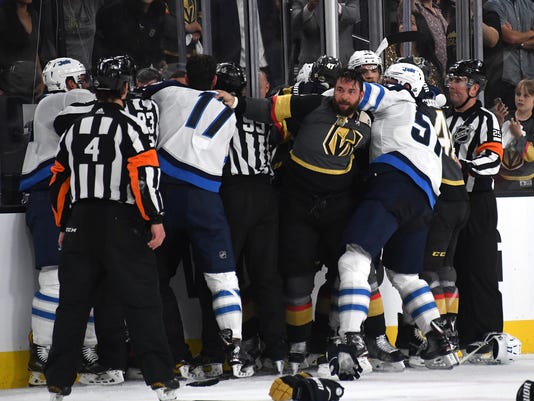 The Vegas Golden Knights and the Winnipeg Jets fight after the final whistle of Game Three.(Photo: Ethan Miller / Getty Images)

Las Vegas — Jonathan Marchessault vowed after the Golden Knights' morning skate to come out swinging in Game 3 of the Western Conference final, looking to avoid a back-and-forth affair with the Winnipeg Jets.

For the second straight game, Marchessault scored two goals – including one just 35 seconds into the game – to lead Vegas to a 4-2 victory Wednesday night, helping the expansion Golden Knights to a 2-1 series lead.

Vegas, two wins from advancing to the Stanley Cup final, improved to 5-1 at home in the playoffs and host Game 4 on Friday night.

"We worked all year to get in a position like that," Marchessault said. "We definitely can't take it for granted. They got to come out like their season's on the line, so we've got to be ready to push back and get some energy off the crowd."

Marchessault added an empty-net goal with 3 seconds left, becoming the first player in league history to score in the first and last 60 seconds of the same Stanley Cup playoff game, according to the NHL. He leads Vegas with 17 points (eight goals, nine assists) in the postseason, and needs two goals to tie the NHL record for the most by a player in his club's first postseason appearance.

Mark Scheifele scored both of Winnipeg's goals and has a playoff-leading 14 goals in 15 postseason games. Connor Hellebuyck had 26 saves for the Jets, who arrived in Las Vegas having outscored their opposition 23-15 in road games during the playoffs.

"A few miscues and they made us pay for it; that can't happen," Scheifele said. "We can't sulk on this too long. We've got to pick ourselves up tomorrow and be ready for a big game on Friday."

Scheifele is correct, with history against the Jets, who are trailing in a series for the first time this postseason. Teams with a 2-1 lead in the conference final (or NHL semifinals) have won the series 35 of 43 times (81.4 percent) since 1975.

"That's an important challenge," Jets coach Paul Maurice said. "We're going to have to be able to handle that. It would be rare that you lead the series straight through. We want to make sure we deal with our loss, don't carry it too heavily and then come up with our finest game of the post-season."

The problem for Winnipeg is stopping a Golden Knights team that is finally seeing production from the depth of its lineup.

While Marchessault got things going early to give the Golden Knights a 1-0 lead, their second line of Neal, Tuch and Erik Haula continued to heat up.

After Scheifele tied the game in the second period, Neal answered 12 seconds later after Haula dished a perfect pass to give the Knights a 2-1 lead. Tuch notched his fifth goal of the playoffs after Neal fed him with a nifty pass from behind the net.

"They played on the road trip, they just didn't have many chances to score and I thought they were more involved in the offense and they were skating, and they played really well," Vegas coach Gerard Gallant said about his second line.

Scheifele's second goal of the game 18 seconds into the third seemingly sparked the Jets, but they couldn't solve Fleury, who made several huge saves late in the game to preserve Vegas' lead.

After stonewalling Tyler Myers' breakaway attempt with 11:50 left in the game, he stymied Scheifele's back-to-back shot with 9:30 remaining. Less than two minutes later, he smothered the puck with a slew of players piled near the crease.

"He's made unbelievable saves," Gallant said of Fleury. "They were obviously important at a key time for us. That's Fleury. He's been great all playoffs, he's been great all year for us. He's a guy that has fun out there. I'm sweating on the bench yelling my head off and I look down there and he's just having fun."

He sure is. During a scrum behind the Golden Knights' net with 2:34 left in the second period, Fleury reached over and tickled the left ear of the Jets' Blake Wheeler — whose back was to the goalie.

"I was just sitting there and people, they were fighting," Fleury said, "and (I was) trying to have a little smile by myself. That was it."

"I didn't imagine it in October and November, but come around January, we knew we had a good hockey team," Gallant said. "I didn't know if we'd go this far right now, but I knew we had (as good) a chance as anybody else. Early January, around the All-Star game, I was a strong believer in our team. I knew we were going to battle well, compete well and no one was going to push us over, that's for sure."