Center Jack Hughes of the U.S. National Team Development Program Under-18 team in Plymouth is the No. 1 North American skater on the NHL Central Scouting Bureau’s midseason draft rankings.

Jack Hughes, the consensus No. 1 prospect for the 2019 NHL Draft, talks about the draft, his hockey-playing brothers and the success of his NTDP teammates. The Detroit News 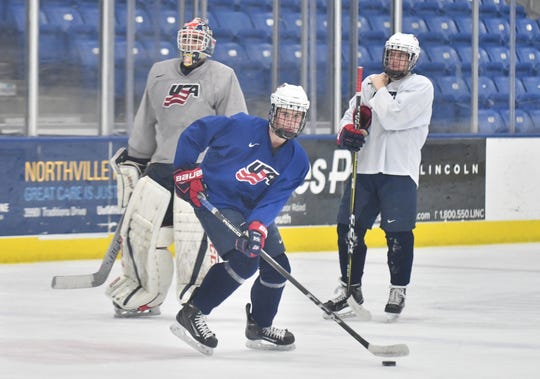 Center Jack Hughes of the U.S. National Team Development Program Under-18 team in Plymouth is the No. 1 North American skater on the NHL Central Scouting Bureau’s midseason draft rankings.

Hughes, from Orlando, Fla., could become the eighth U.S.-born player drafted No. 1 overall, in 2019, and the first since Auston Matthews in 2016.

Hughes’ brother, Quinn Hughes, is a defenseman for the University of Michigan and was drafted seventh overall by the Vancouver Canucks in 2018.

“Hughes is in a special class all his own for the 2019 NHL Draft and the best is yet to come,” director of NHL Central Scouting Dan Marr says. “He is an exceptional skater who plays the game with speed and quickness, both with and without the puck.”

The No. 1-ranked players at midseason in the other categories: