The Columbus Blue Jackets are making a serious bid to knock the team with the best regular-season record out of the playoffs. 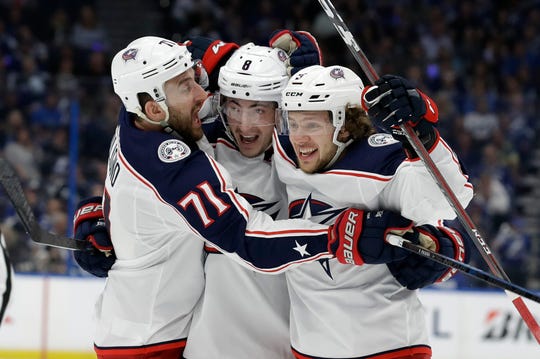 Tampa, Fla. — The Columbus Blue Jackets are making a serious bid to knock the team with the best regular-season record out of the playoffs.

Matt Duchene had a goal and three assists, Sergei Bobrovsky made 23 saves, and the Blue Jackets stunned the Tampa Bay Lightning, 5-1, on Friday night to take a 2-0 first-round series lead.

Two down. Two more to go.

“It’s half the wins that we need,” Duchene said. “We’re keeping our heads down and our eyes on the prize.”

Columbus also got goals from Cam Atkinson, Zach Werenski, Riley Nash and Artemi Panarin. The Blue Jackets started the playoffs last season by winning the first two games of the first-round series with eventual Stanley Cup Washington, which won the next four games.

Mikhail Sergachev had a goal and Andrei Vasilevskiy stopped 22 shots for the Lightning, who lost two games in a row just twice in the regular season. Tampa Bay matched the 1995-96 Detroit Red Wings for the most wins in a regular season with 62.

“The regular season is different than the playoffs,” Lightning coach Jon Cooper said. “Things just happen so fast. Alarms are going off. This is a five-alarm fire. But it’s adversity and sometimes that’s good that you have to go through stuff like this to see how we respond. One thing I do know about being with this group is, they find a way.”

Lightning right wing Nikita Kucherov, who led the NHL with 128 points, was held off the scoresheet for the second consecutive game and picked up tripping, boarding and 10-minute misconduct penalties late in the third period.

It’s likely that Kucherov will face discipline from the NHL.

“I’m not going to give you any thoughts on it,” Columbus coach John Tortorella said. “It’s self-explanatory.”

The Blue Jackets rallied from a three-goal, first-period deficit to beat Tampa Bay 4-3 in Game 1 on Wednesday night as Seth Jones scored the go-ahead goal on the power play to cap Columbus’ three-goal third period.

Tortorella said he’s not surprised about the 2-0 series advantage even after the early hole in Game 1.

“No, and I’m serious about that,” Tortorella said. “I think we’re a good team. We’ve gone through a lot as a team. If we’re going to be successful as a team, we have to play as a team. So, even when we were down 3-0, I don’t think we got away as far as how we have to play.”

Duchene assisted on both of Columbus’ goals during the first period and put the Blue Jackets ahead 3-0 on the power play when the center scored on the rebound at 1:28 of the second after Vasilevskiy had stopped his tip-in try.

Columbus, 28th in the NHL on the power play during the regular season, converted two of four chances and is 3 for 6 overall.

Tampa Bay’s top-ranked power-play unit has failed in all five opportunities in in the series.

The Lightning got within two goals at 3-1 when Sergachev’s shot went into the net off Blue Jackets defenseman Markus Nutivaara’s skate five minutes into the third. But, Nash and Panarin scored goals over a three-minute span midway through the period.

Bobrovsky stopped Kucherov’s shot and got a piece of Steven Stamkos’ scoring chance that also went off the crossbar during an early second-period power play.

“We’re better than we’re executing,” Stamkos said. “There’s no sense in pouting right now. We have to find a way to win.”

Duchene stole the puck from J.T. Miller along the left-wing boards and sent a pass into the low slot that Atkinson redirected past Vasilevskiy 5:15 into the game.

Werenski made it 2-0 from the blue line after Duchene won a faceoff during a power play at 11:44 of the first.

Werenski also had an assist, and fought Brayden Point.

►(At) N.Y. Islanders 3, Pittsburgh 1: Jordan Eberle and Josh Bailey scored in the third period and New York beat Pittsburgh for a 2-0 lead in their first-round playoff series.

Mathew Barzal had two assists in a chippy, physical game that featured a lot of hard hits and some skirmishes, especially in the first two periods — and also after the final buzzer.

Erik Gudbranson scored and Matt Murray finished with 31 saves for the Penguins, who have lost the first two games of a postseason series for the first time since the 2013 Eastern Conference finals against Boston.

Game 3 is Sunday at Pittsburgh.

Pat Maroon and Ryan O’Reilly also scored for the Blues, who lead the best-of-seven matchup 2-0 and host Game 3 on Sunday night. Rookie Jordan Binnington made 26 saves.

Blake Wheeler and Mark Scheifele each had a goal and one assist for the Jets, Patrik Laine also scored and Dustin Byfuglien had a pair of assists. Connor Hellebuyck stopped 28 shots.

►Vegas 5, (at) San Jose 3: Mark Stone scored the tiebreaking goal on a power play created by a penalty that negated an apparent San Jose goal and the Vegas Golden Knights responded after blowing a three-goal lead in the first period to beat the Sharks and tie their playoff series at one game apiece.

The teams packed an entire game into the opening minutes with the Golden Knights scoring three goals in the first 6:11 and the Sharks rallying for three more in the final 3:01 to become the first team in NHL history to tie a playoff game in the first period after falling behind 3-0.

Cody Eakin, Colin Miller and Max Pacioretty all scored in the first period to stake the Golden Knights to the big lead after losing the opener 5-2. William Karlsson added a short-handed goal in the third to ice it.

Couture, Tomas Hertl and Joe Thornton scored for the Sharks.

Game 3 will be Sunday night in Las Vegas.