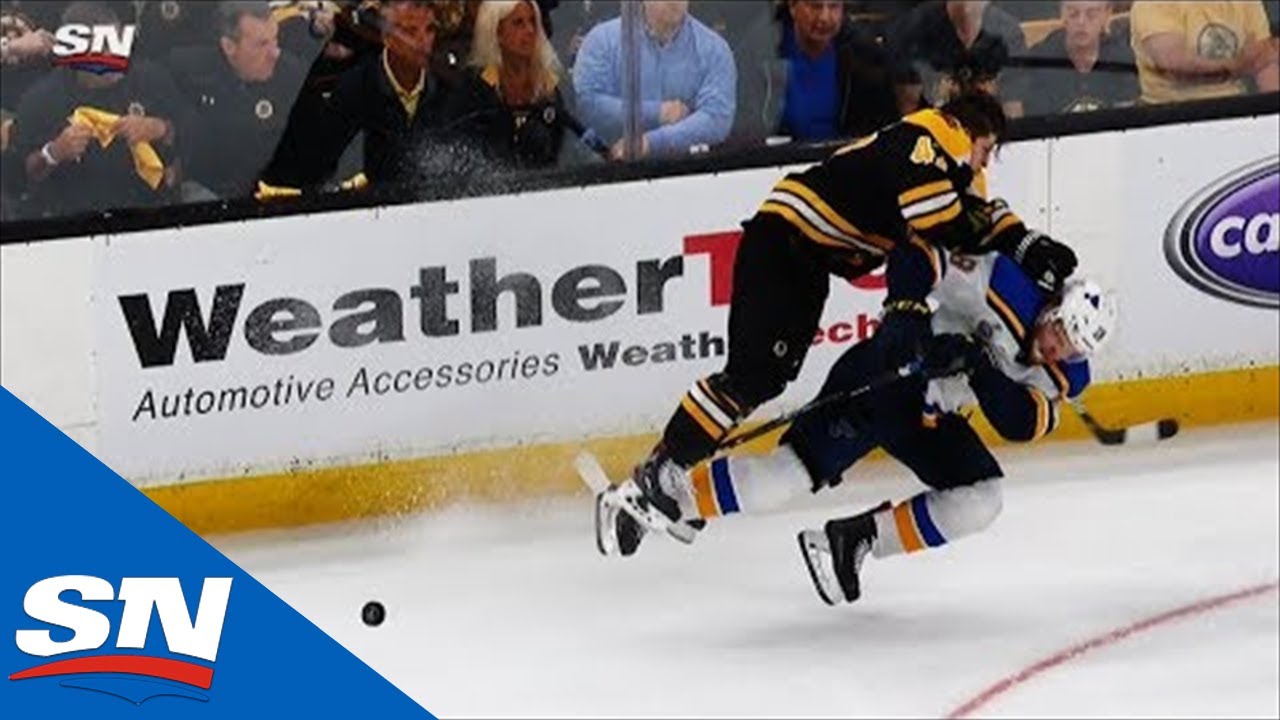 Boston — Torey Krug worried afterward that his pregnant wife would not really like him flying down the ice and delivering a bone-crushing hit without a helmet on.

There wasn’t anything he could do about it now.

Krug, the Livonia native and former Michigan State star, provided a signature moment of the Boston Bruins’ 4-2 victory against the St. Louis Blues in Game 1 of the Stanley Cup Final on Monday night. After getting his helmet ripped off in a tussle with David Perron he skated down the ice seconds later, racing 150 feet and absolutely drilling Robert Thomas with an open-ice body check.

The hit fired up the bench and the raucous crowd but it could be the last time a play like that ever happens. NHL general managers have endorsed a proposal that would require a player without a helmet to go to the bench instead of finishing his shift. The NHL Board of Governors has not yet voted on it.

“I’m sure my coach and my GM were hoping that I would just get off the ice at that point,” Krug said. “But that’s hockey.”

Krug’s old-school look flying down the ice with his lid still on the ice is a rare sight in the NHL, which put in a grandfathered helmet rule in 1979 and recently did the same with visors. Krug said first and foremost players need to take care of their heads, though with the Stanley Cup on the line, it wasn’t really on his mind.

He was angry. And you wouldn’t like Krug when he’s angry.

“I was battling with their guy in front, got up without a helmet and wasn’t too happy about it,” Krug said. “Just came down the ice and had a chance to make a hockey hit. And it turned out to be a good one. So it was big. Hopefully it gave the guys a boost on the bench, and the crowd obviously liked it.”

The hit came in the third period after Sean Kuraly’s go-ahead goal, and fans erupted into a “We want the Cup!” chant after Krug laid out Thomas.

“That was awesome,” teammate Marcus Johansson said. “That was fun.”

Thomas paid the price for Perron making Krug mad, and the Blues weren’t all that happy about the hit. Krug did skate a long way – he was catching up to the play – and while St. Louis coach Craig Berube said he didn’t see the hit, some of his players took some exception to it.

“He came hard at Thomas,” Blues forward Brayden Schenn said. “I’m not sure if Thomas touched the puck or not. But it what is. Playoff hockey. We’ll see how to handle it.”

Minutes after an emotional comeback victory, Krug flashed a smile about the fact he got a haircut a few days ago. Told of the planned rule change to make players go to the bench, Krug said simply, “Then I’ll go to the bench.”

Or maybe players will resist the rule change, which has already been instituted in the American Hockey League as a way to protect against head injuries.

“I’m not sure,” said Radko Gudas, the NHL Players Association representative for the Philadelphia Flyers. “If guys feel comfortable playing without a helmet, why wouldn’t he?”

Krug is a 5-foot-9 defenseman accustomed to opponents trying to hit him at every turn and get under his skin, so there are few situations where he’s not comfortable. He’s far better known for putting the puck in the net than putting other players on the ice, but if Boston wins this series, Krug’s helmetless shift will go down in hockey lore.

“Momentum swings, it gives your team a boost of energy,” Krug said. “I don’t know what they were feeling on their bench, but if it pushes them back and catches them off-guard, then great for our team. But I think it gave our team energy and that’s all you’re trying to do out there is make little plays throughout the game that pushes your team in the right direction and that was one of them.”