When the Blues host the Bruins in Game 3 on Saturday night, it’ll mark the first Stanley Cup Final game in the city in 49 years. 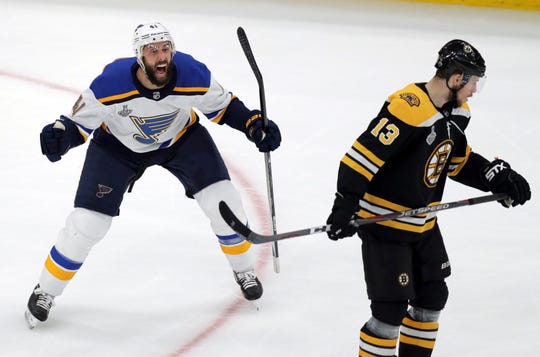 They ain’t seen nothin’ yet.

When the St. Louis Blues host the Boston Bruins in Game 3 on Saturday night, it’ll mark the first Stanley Cup Final game in the city in 49 years. That was May 5, 1970, a 6-2 loss to the Bruins in Game 2 of the series that Bobby Orr ended in four games with an overtime goal.

After winning a final game for the first time in franchise history to tie the series at 1-all, the Blues are trying to make their own history at home. To do so, the least-penalized team in the playoffs that went to the box 10 times in the two games in Boston will need to balance feeding off a raucous crowd and getting too overemotional in that charged atmosphere.

“It’s going to be extremely special, for sure, to play in front of the Blues fans that have been waiting for it for a long time,” Perron said Friday. “You’re trying to keep your sticks close to you so you don’t trip guys, you don’t high-stick guys and sometimes it’s just going to happen. It’s not a penalty you’re trying to take. It happened to me in the first game, and it’s very difficult to take. But you’ve got to be composed with the puck, you’ve got to be composed with your stick.”

Composure is the Blues’ calling card after rallying from the basement of the NHL standings in early January to within three victories of the first championship in franchise history. Their home arena was full for viewing parties for Games 1 and 2, so it’s tough for players not to get caught up in the excitement after watching videos of those scenes.

Fans are certainly excited. NBC Sports reported the highest local rating on cable for a playoff game, StubHub said the price to get in is $725, the average ticket costs $1,068 and demand is outpacing Game 1 in Las Vegas from a year ago.

“This is a hockey town and they’ve been with us through the ups and downs,” center Ryan O’Reilly said. “I don’t think I’ll be able to describe what it’s going to be like. But from what I’ve seen I’ve been very impressed, and we’re excited to get home to show what this town’s about.”

To show them good hockey, the Blues must try to avoid the penalty problems that plagued them in Boston. They were whistled for high-sticking, hooking, cross-checking, interference and slashing and twice for tripping and goaltender.

Coach Craig Berube, seventh in NHL history with 3,149 penalty minutes mostly for fighting during his playing career, is not happy about his team’s lack of discipline so far in the series. St. Louis got here in part because it only took 55 penalties in the first 19 playoff games, and Berube chalks the difference up to too much emotion and harps on it with players because he knows what Saturday night will be like.

“We talk about that a lot,” Berube said. “You have to keep your emotions in check.”

That won’t be a problem for Bruins agitator extraordinaire Brad Marchand, who days ago made it clear he doesn’t care what Blues fans think of him. And that works in reverse, too.

What can happen in the game when Boston’s playoff-leading power play goes to work is the main reason the Blues want to avoid penalties. The Bruins have only scored on two of their 10 power plays so far, but they’ve also used that time to generate momentum.

On the flipside, so much time down 5-on-4 also puts wear and tear on the Blues’ penalty killers and wreaks havoc on the flow of the game. They’d like to avoid that this time and give their long suffering fans something to cheer about.

“You try not to let the disruption of penalties and power plays affect you whether you’re short-handed or on the power play,” defenseman Robert Bortuzzo said. “As a player, you just go out and you may be skipped over five shifts because of the disruption or whatnot, but it’s easy to get emotionally invested and right back into it when that is the case.”