He spent five nights at the UC Irvine Medical Center in Orange County, California, where he had a cardioverter defibrillator implanted to monitor heart functions.

St. Louis Blues captain Alex Pietrangelo says teammate Jay Bouwmeester is in good health some seven weeks after having a cardioverter defibrillator implanted in his chest.

Pietrangelo said he and his teammates have occasionally stopped in to see Bouwmeester while the NHL is on hiatus because of the coronavirus pandemic. He said he’s pleased to see Bouwmeester taking walks through their St. Louis-area neighborhood. 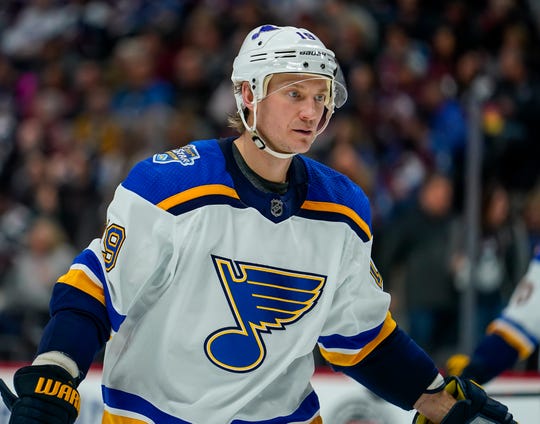 Blues' Jay Bouwmeester collapsed on the bench during a break in play Feb. 11 against the Ducks. (Photo: Jack Dempsey, AP)

The 36-year-old Bouwmeester has been ruled out from returning to play this season, including the playoffs, after he collapsed on the bench during the first period of a game at the Anaheim Ducks on Feb. 11.

He spent five nights at the UC Irvine Medical Center in Orange County, California, where he had the device implanted to monitor heart functions. The defibrillator can deliver a shock to the heart if an arrhythmia occurs to restore a regular heartbeat.

Pietrangelo said Bouwmeester was already a regular at Blues home games and practices before the season was suspended on March 12.

“That was kind of a breath of fresh air for us, knowing he’s out and about and hanging around the guys,” he added.

Pietrangelo said Bouwmeester’s plan was to stay in St. Louis until the season ended, before seeking medical clearance to return home to Edmonton, Alberta.

When it comes to game-day dress code, hockey players overwhelming favor relaxing the rule requiring a suit and tie, according to the results of the NHL Players’ Association’s annual poll of players released.

Players voted 411 to 152 in favoring the NHL adopt the NBA’s dress-code policy, which requires players wearing “business or conservative attire” when arriving at and leaving a game.

The NHLPA said 588 players participated in the 21-question poll, which covered topics involving skills, arenas, teams and off-ice fun. That category ranged from who they considered the league’s best golfer (Dallas’ Joe Pavelski) to the top player to follow on social media (New Jersey’s P.K. Subban).

This is the third consecutive year the NHLPA has conducted the poll, though not all the categories — including the dress-code question — have been the same. The results were released while the NHL’s season has been suspended and players asked to self-isolate because of the new coronavirus.

McDavid was the overwhelming favorite as the league’s top forward. He received 379 of 555 votes, followed by Crosby (83) and Colorado’s Nathan MacKinnon (37). The results were similar to last year’s poll.

With 224 votes (68 more than McDavid), Crosby also topped the list of who players would want on their team when needing to win one game.

The San Jose Sharks agreed to a contract with free-agent Arizona State defenseman Brinson Pasichnuk. He was the captain his final two years in college and he had 11 goals and 26 assists in 36 games this season for the Sun Devils. His 121 shots led all defensemen in the nation and he ranked second in goals and third in assists.