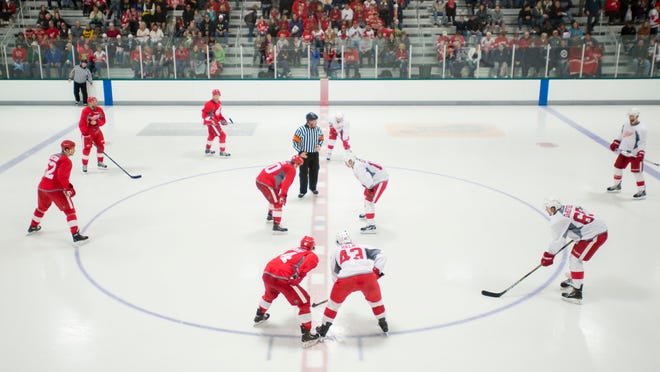 Traverse City — Baby steps. It's only been two days. But the work Daniel Cleary put in over the summer could be paying off.

After extensive training and rehabilitation, Cleary has strengthened the left knee that has given him so much trouble the past couple seasons. And on Saturday, Cleary was skating on a line with Johan Franzen and Henrik Zetterberg during workouts, and skating as well as he had in a long time.

"A good two days," Cleary said. "I put in the work to get it where it needs to be, so that's a good sign. It's put me in a better position to move on the ice, and more pain free.

When the Red Wings re-signed Cleary, 35, to a one-year contract in July, there was frustration among fans who felt loyalty to a veteran player wasn't a prudent move.

But the Red Wings still feel Cleary can be an asset if he's healthy.

"Way better," coach Mike Babcock said of how Cleary has been skating. "He's trained hard. He's done everything he possibly can. Is his leg up to speed? He looked good this morning. Is his agility there? It's like the same as everyone else. We're going to watch."

Franzen, Zetterberg and Cleary have been skating either together, or in combinations of two, for the last 10 seasons they've been teammates. Playing on a line centered by Zetterberg or Pavel Datsyuk always is a thrill in Cleary's mind.

"Anytime you get to play with Z or Pavel it's like winning the lottery," said Cleary, who has switched from number 71 to 17 this season. "I've played with Z and Mule over the last 10 years. There's familiarity."

Datsyuk and young defenseman Alexey Marchenko are the lone Russians on the Red Wings roster these days, but the two don't spend much time together.

One reason, there's the age difference. Datsyuk is 36 and Marchenko 22.

"We spend some time together, but it's not like he's my father," Marchenko said. "I cannot be with him all the time. Sometimes he invites me to dinner and it's a good time.

"It's good there's another Russian guy (on the team), and especially such a great player. He can give advice."

The talk of the summer in the NHL was analytics, and the increased use of them. Statistical experts have been hired by teams — the Red Wings are looking into it — as everyone looks for that elusive competitive edge.

Babcock likes the added information, but is getting tired of the constant attention to it.

"Do we really have to go there?" Babcock said. "There's a real emphasis to do more. We're going to make sure we do our part and make sure we're cutting edge. In saying all that, it's kind of a like a catchphrase. It's sexy for a while until the next (big thing). I'm looking forward to the next one."