Tatar joins Pavel Datsyuk and Darren Helm on a line. 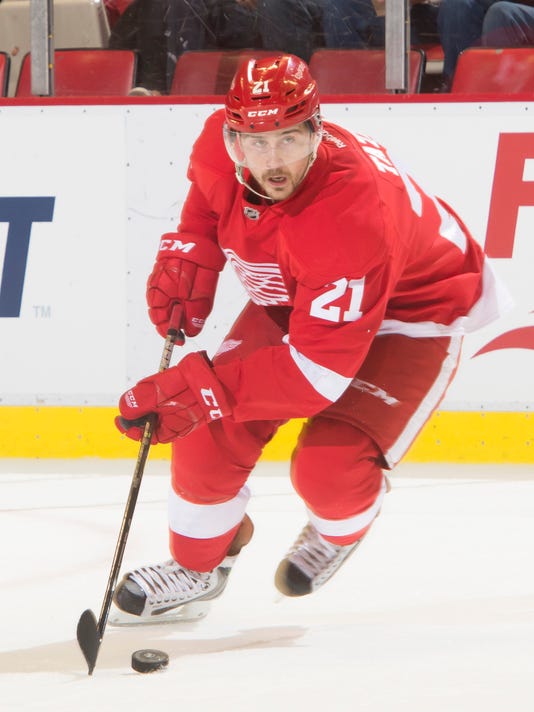 Detroit left wing Tomas Tatar is to boost his offensive number, which only includes a goal after seven games. (Photo: David Guralnick/Detroit News )

Philadelphia — Coach Mike Babcock had a vision in training camp of a particular line to use.

Babcock had Pavel Datsyuk centering Tomas Tatar and Darren Helm, a line he put together in Traverse City, but was quickly scrapped when Datsyuk (separated shoulder) and Helm (broken nose, groin) were hurt in the first exhibition game.

Datsyuk finally returned to the lineup Tuesday. With the Red Wings still searching for a good balance throughout their lines, Babcock felt the time was right to give the trio another look.

“Neither guy (Datsyuk, Helm) played in training camp, (so) maybe later on I’ll like it but right now it’s just a line,” Babcock said. “Both guys are trying to get their game back.

“Helmer is a guy who missed training camp, like Pavel. They’re working their way back. They’re not where they need to be. As time goes on, they get healthy and fit, they’ll be much better.”

The opportunity to play with Datsyuk could spark Tatar, who has only one goal (his only point) in seven games this season.

“When Pavel is on the ice, a lot of players are focusing on him, so he makes a lot of space for you,” Tatar said. “I can learn a lot from playing with Pavel and it’s a great opportunity for me.

“You just need to give the puck to Pavel and he’ll create most of the chances for the line. He’s a smart player and just needs to have the puck on his stick.”

Young winger Andrej Nestrasil is still looking for his first NHL point after seven games, and is minus-2.

Nestrasil was on a line with Riley Sheahan and Tomas Jurco to start Saturday’s game,

Nestrasil had a fine exhibition season, making the Red Wings roster somewhat unexpectedly, but is learning the regular season is a different animal.

“He was excellent early, heavy on the puck, made good plays and he hasn’t been as good the last couple of games,” Babcock said. “In saying that, I don’t think our team was as good, so he fit right in.

“He just has to keep being smart without it (the puck) and heavy on it (the puck) when he gets it and make good plays. He’s a work in progress, like a lot of our young guys.”

“I just get out the bingo machine on the back of the bench,” Babcock joked. “Spin it around and throw it out.”

... Daniel Cleary, Stephen Weiss and Brian Lashoff were healthy scratches. Cleary and Lashoff are yet to play this season.

…The Flyers are missing defensemen Braydon Coburn, Andrew MacDonald and Kimmo Timonen to injuries. But Babcock wasn’t concentrating on that.

“We’re going to try and get after their D like we always try to do,” Babcock said. “I don’t put a lot of stock into who is here and who is not. We’re playing the Flyers, we haven’t had a lot of success (in Philadelphia) and we have to play better and get in on their defense.”