Power play is job one for Red Wings

Babcock will "probably" change personnel. But they'll need to be in attack mode.

Power play is job one for Red Wings 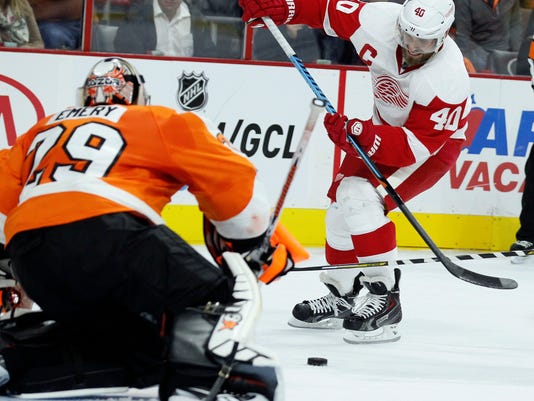 Henrik Zetterberg races in to get a shot on Flyers goalie Ray Emery during the Flyers’ 4-2 win Saturday.(Photo: Tom Mihalek , Associated Press)

Detroit — They don't play again until Wednesday, so there will be time to work on the power play.

And it sure sounds like that's what the Red Wings coaching staff will do.

Go back to square one, dissect it from every angle, and see what they can come up with.

"It's no good," said Babcock of the power play, which entered Sunday ranked 27th in the league with a success rate of a paltry 6.7 percent (2-for-30). "We're going to go through all the details. We're going to get a fresh start. We have 74 games left, don't we?

"Let's make sure it's top of the league."

Babcock will "probably" change personnel. But whoever does wind up on the unit, they'll need to be in attack mode.

"I thoughout our power play was going (several games ago). We had the principles and I thought it was going, but it's not going and we have to get it fixed. It's like the elephant in the room you don't talk about. It's not going good enough. We have to fix it."

The Red Wings did nothing on three power-play attempts during Saturday's 4-2 loss in Philadelphia, a frustrating enough loss, but even worse because of the difficulties with the man advantage.

A key goal on the power play when they had opportunities to sink the floundering Flyers could have gotten the Red Wings a victory.

Instead, the Flyers stayed around, tied the score, and eventually stole the game in the third period.

The Red Wings haven't scored in their last 20 power-play attempts, since Gustav Nyquist scored against Boston on Oct. 15.

"Attack" was also a word Henrik Zetterberg used, noting the Red Wings have been reluctant to get the puck on net.

"We're too careful, too afraid of losing the puck," Zetterberg said. "We're not shooting. Instead we have to shoot and when the goalie makes the save, retrieve the pucks.

Babcock had Zetterberg, Pavel Datsyuk, Tomas Jurco, Darren Helm and Niklas Kronwall on one unit, with Riley Sheahan, Gustav Nyquist, Andrej Nestrasil, Tomas Tatar and Danny DeKeyser on the other.

In the scoring column

Riley Sheahan got into the goal-scoring column for the first time this season Saturday, capping a workmanlike effort from his wingers Andrej Nestrasil and Tomas Jurco down low.

The line had several good moments, using its size and skill to keep the Flyers chasing, and offering a glimpse of what could be an effective line.

"All big bodies, all have a decent skill level, we can make some plays in the offensive zone," Sheahan said. "We just have to focus on getting out of the defensive zone quick and getting the puck in deep."

Getting that first goal was a relief for Sheahan, who had been without a goal along with his linemates.

"It definitely helps," Sheahan said. "Hopefully, maybe I can get a roll going now and just keeping the same attitude and playing my game. But it's nice to get that first one. We played good as a line."

The Red Wings tweaked their schedule a bit and practiced Sunday, and will not be on the ice today.

… With the Sunday practice, there were numerous young kids in the locker room, many players' sons, all of whom were running around and displaying their short attention spans.

"They were in the meeting today," said Babcock, who enjoys having the youngsters around. "They were like our players, they didn't concentrate very good."