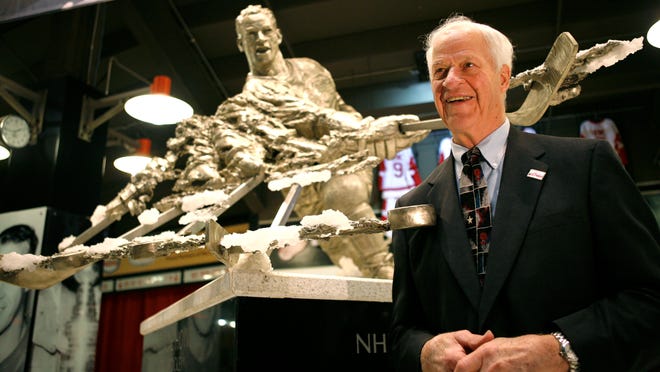 Detroit — Hockey legend Gordie Howe, 86, suffered a serious stroke Sunday in Texas, and has lost some function on one side of his body and has difficulty speaking.

The Red Wings great, whom millions across North America call "Mr. Hockey," is resting at his daughter's home in Lubbock, according to his son, Dr. Murray Howe.

"Basically, sometime in the early morning on Sunday he suffered a pretty bad stroke," said Howe, who heads the department of radiology at Toledo Hospital.

"The right side of his body is very, very weak. He's unable to stand without help. He's able to speak, but very, very difficult to speak.

"He knows who he is. He knows the people around him. But it is very difficult for him to get up and walk around. So he is pretty much confined to his bed right now. So we're just trying to keep him comfortable, and that's our goal."

With Sid Abel and Ted Lindsay, and later Alex Delvecchio and Lindsay, Howe comprised "The Production Line," the most potent offensive scoring unit in the NHL from the late 1940s through the mid-1950s.

Howe is a member of the Hockey Hall of Fame, as is his son, Mark.

His late wife, Colleen, who did much to manage her husband and sons' hockey careers, and later ran for Congress in Macomb County, died in 2009.

Howe had suffered through a difficult summer, requiring spinal surgery. But Murray Howe said he had returned to fairly fit shape, walking as much as a mile per day, before the stroke.

"The downturn this summer was primarily an issue related to his spine, where it just started becoming symptomatic to the point where he couldn't walk," Howe said of his father, who suffered from dementia for a couple years and stopped granting interviews two seasons ago. "We had him undergo a minimally invasive lumbar decompression procedure, and he walked out of there an hour later pain free," Howe said.

"Since that time, which is maybe eight weeks or so, ago, maybe 10, he's been doing great. He's been walking at least a mile a day, and he was essentially pain free and doing well, up until this past Sunday.

"So we helped him with one problem. But this one is a little bit tougher to fight."

Gordie Howe's career in Detroit is the stuff of legend.

At a time when the city boomed, the Red Wings and the Lions dominated both their leagues and Howe established himself as the best player in the NHL, eventually scoring more goals than his high-flying rival, Maurice "Rocket" Richard of the Canadiens.

In a recently released book, "Mr. Hockey: Gordie Howe My Story," he wrote of his glory years, including 1952, when the team swept both the semifinals and Stanley Cup Finals in four games.

"It's not my way to be cocky, but if the playoffs had lasted another couple of months, I feel like the team we had in 1952 could have played for the rest of the summer and still not lost a game," Howe wrote.

"The way we clamped down on opponents led some to say we strangled them."

It was in the final game that season, as the Red Wings won the Cup, that an octopus, signifying the eight victories then required to win the championship, flew.

Howe score 801 goals in the NHL and 174 in the WHA, where he played for a time with Mark and another son, Marty.

Large for his era, Howe also was among the most brutal players of his time, winning fight after fight against the toughest players in the game and throwing legendary elbows with such speed and abandon, referees often failed to see them.

Later in his career, however, Jack Adams, the former coach and general manager of the Red Wings, approached Howe and explained that given his reputation, Howe need no longer fight.

He fought less after that, finding that a mere look could cause many players to back off.

And yet, his easy-going personality and heart of gold, the public love story that was his marriage and the fine men his sons became, made Howe a hero in Detroit and in many places in Canada and the United States.

"You can never, ever replace Gordie Howe — the greatest player ever, the best idol a young player could ever look up to, but most of all the nicest man I have ever met!" NHL great Wayne Gretzky wrote for the overleaf of Howe's book.

Bobby Orr, the retired Bruins defenseman who also is considered on the shortlist of greatest NHL players, wrote the foreward.

"His longevity as a professional hockey player reflects his absolute passion for the game," Orr wrote. "I believe it was his passion to play that set him apart from his peers.

"As a young teenager, meeting Gordie for the first time, I already knew he was special. That feeling has not changed. Gordie Howe will always be one of my heroes. And, in my opinion, he will always be the best that ever played."

Murray Howe sought to reassure those around Michigan and North America who continue to follow his father's life.

"For any fans who are concerned about him, they should know that he's very comfortable and he's surrounded by family," he said. "And that is our goal, to make sure he is as happy and comfortable as can be, until the end."