Wings' Weiss sent to Grand Rapids; he gets hurt

The Red Wings sent Stephen Weiss to Grand Rapids this week for a conditioning stint.

Wings' Weiss sent to Grand Rapids; he gets hurt 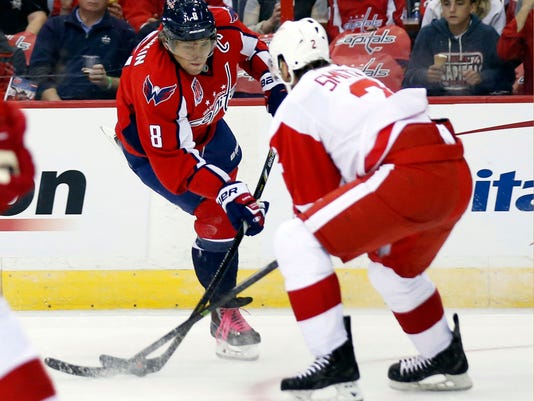 Washington, D.C. — The Red Wings haven't been scoring as much they'd like this season and Stephen Weiss hasn't been able to play as much as he or the team would like.

Hoping to fix both situations, the Red Wings sent Weiss to Grand Rapids early this week for a conditioning stint.

But the news wasn't good, as Weiss left Wednesday's game in Grand Rapids with a lower body injury. Weiss was unavailable to speak to the media after the game. General manager Ken Holland said Weiss will be re-evaluated Thursday and has not been ruled out for the Griffins' game Friday.

Weiss was scheduled to play two games in Grand Rapids, then return to the Red Wings in time for Sunday's game in Buffalo.

"I want to put him in the lineup," said coach Mike Babcock after the morning skate Wednesday. "When you haven't played, it's an unfair opportunity."

Weiss, 31, has gotten into game this season, playing just over eight minutes Oct. 18 against Toronto. That was his first regular-season game since Dec. 10, after which he was done for the remainder of last season because of a sports hernia.

Signed to a five-year free agent contract worth $24.5 million in July 2013, Weiss has yet to have any offensive impact.

Weiss was a 50-to-60 point producer in his years with the Florida Panthers and the Red Wings envisioned him centering the second line and providing consistent production from that slot.

The Red Wings have been slugging offensively to start the season, so they're hopeful Weiss can make an impact.

"We're not scoring the way we'd like, or we think we're going to score," Babcock said. "Can he be part of that solution? That's why we're doing it."

Johan Franzen (groin) skated for a second consecutive day, and came away encouraged.

"Maybe I'll skate (today) and I'll feel awesome," said Franzen, who was hesitant about saying he'd be ready for Friday's game against the Kings. "But I don't know. I don't think I'd be game ready.

"Probably (for Sunday against the Sabres), if I would guess."

Before being hurt, Franzen had five points (two goals) in four games.

When you talk about the Capitals, Alex Ovechkin's name always comes up.

But the man usually setting up Ovechkin, Nicklas Backstrom, is an elite offensive player in his own right.

"Outstanding passer, maybe one of the best in the game," Red Wings defenseman Niklas Kronwall said. "He's really smart, so you know the two of them together, they're a good tandem and hard to defend against."

So, why doesn't Backstrom get the credit he deserves?

"A lot of it is his personality, he's a pretty low-key guy," Kronwall said. "He's not looking for any extra fame, or anything like that. He's one of the best players every night and he's shown that over the years, and he's getting better."