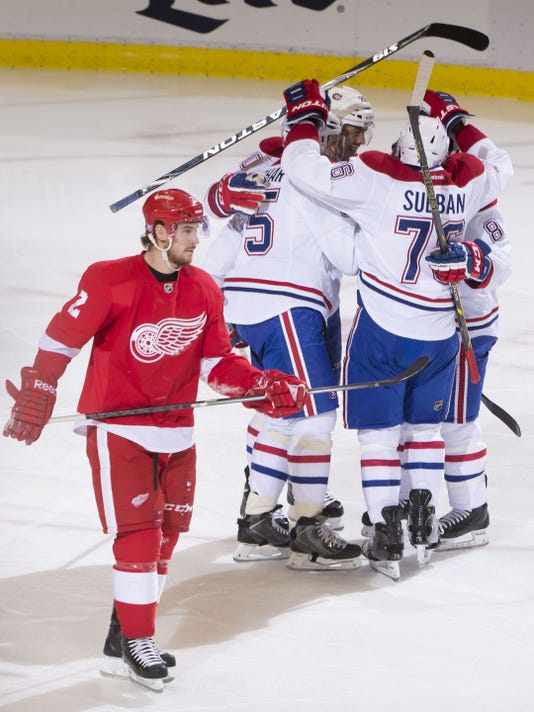 Detroit defenseman Brendan Smith skates past Montreal as they celebrate a goal by Brandon Prust in the second period. The Canadiens won 4-1.(Photo: David Guralnick/Detroit News)

Detroit center Riley Sheahan is checked to the ice by Montreal defenseman P.K. Subban after scoring the Red Wings only goal in the third period. David Guralnick / Detroit News
Fullscreen

The two teams mix it up during a second-period scuffle. David Guralnick / Detroit News
Fullscreen

A goal by Montreal defenseman P.K. Subban flies past Detroit goalie Jimmy Howard and into the net during the second period. David Guralnick / Detroit News
Fullscreen

Detroit — The Red Wings had a day off Saturday and one could argue another one Sunday against the Montreal Canadiens.

It seemed for much of the evening the Red Wings were still in relaxation mode, as they lost 4-1 to the Canadiens.

But by then, it was too late, after a rather inconsistent effort all game.

"We have to be better for sure," Justin Abdelkader said. "We have to find a way to come out stronger. We came out flat for whatever reason and let them take it to us."

"The team that was supposed to win with effort and execution did, and that team that didn't get that done, lost," Babcock said. "We didn't do much good tonight."

Babcock gave the Red Wings Saturday off, what with a busy road schedule in the coming week.

But it may have come back to haunt the Red Wings.

"We didn't have much jump, didn't have much energy for whatever reason," Babcock said. "We scheduled a day off because we have so much travel this month we couldn't get enough days (off). We didn't want to that but that's the way it goes.

"But we should have competed and skated better than we did."

Riley Sheahan cut the Montreal lead to 3-1 with a power-play goal in the third period.

Sheahan drove to the net and backhanded a rebound past a dazed Tokarski – who had taken a shot of his mask moments earlier – Sheahan's second goal at 4 minutes 6 seconds.

From behind the goal line, to the side of Jimmy Howard, Gallagher got a shot toward the goalie, who mishandled the puck into the net, Gallagher's fifth goal.

"It's tough to pinpoint, we were inconsistent," Sheahan said. "We showed glimpses of great work on some shifts. (The final result) is not what we wanted."

Montreal took a 3-0 lead early in the third period on Tomas Plekanec's goal.

Plekanec and Gallagher sprinted up ice on a rush, Gallagher firing a shot that Howard steered away but off Niklas Kronwall's skate and onto Plekanec's stick.

The Red Wings went 1-for-6 on the power play, but coming up empty on three consecutive in the second period stalled any momentum.

Prust opened the scoring with his first goal of the season, five seconds after a Red Wings' power play ended.

Prust carried the puck deep into the circle, and from the dot, wristed a shot that appeared to get a piece of Howard, and fly into the net at 3:20 of the second period.

The Red Wings went right back on the power play — Montreal defenseman Sergei Gonchar with his second penalty in almost five minutes – but again they failed to generate any offense.

Montreal made them pay again shortly after.

After a David Desharnais faceoff victory, the Canadiens worked the puck to Subban in the high slot.

Subban's shot — one of the best and hardest in the league — glanced off the pant leg of Kyle Quincey and bounced past Howard for Subban's fifth goal, at 8:36.

The Red Wings appeared to catch a bit of a break Sunday when it was announced Canadiens goalie Carey Price would be getting the evening off.

But Tokarski, in only his fifth game of the season, was up to the task.

Tokarski wasn't called upon often, but was sharp when needed to be, his best save arguably being denying Sheahan on a Sheahan one-timer by the hashmarks in the first period.