Jimmy Howard picked up his 14th win for the Red Wings Saturday in a 3-2 victory in Ottawa. 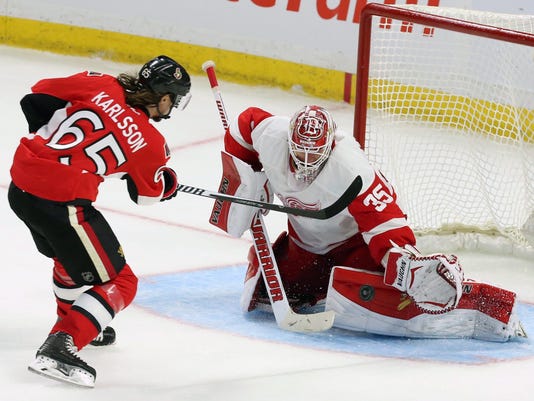 Boston — When the Red Wings needed Jimmy Howard most, he delivered for them Saturday in Ottawa.

The Red Wings were just coming off a three-day holiday break and played like it for the opening two periods.

But because Howard, in his first game since Dec. 19 when he suffered a groin injury, was sharp and kept the Red Wings close, they were able to claw back and earn a 3-2 overtime victory on Gustav Nyquist’s dazzling goal.

“He had to do what he did,” said Babcock of Howard’s effort. “Play good and give us a chance. Now we have to get ourselves going.”

Howard heads into Monday’s game against Boston fifth in the league with a 2.05 goals-against average, and his 14 victories (14-5-7) and .922 save percentage put him just outside the top-10 in the league in each category.

Coming off an inconsistent last season, Howard appeared more relaxed, confident and healthy entering this training camp and his performance has reflected the turnaround from a year ago.

“Just something about him, you knew he was going to have a good year,” said Niklas Kronwall. “He had a great summer of training, got stuff taken care of (physically), and he’s been good from Day 1.

“He’s been awesome every night and given us a chance to win. For him, personally, last year was an off-year for him. But he’s been even better than the year before when he was on the all-star team.”

The Boston Bruins of right now don’t really resemble the Bruins of last season that dismantled the Red Wings in five games in the first-round of the playoffs.

The Bruins (18-15-3, 39 points) have been decimated with injuries throughout the first half of the season, they’re not scoring much (93 goals) and they don’t appear to have the depth they’ve enjoyed the past few seasons.

But the Red Wings — who’ve split two games with the Bruins this season — aren’t taking anything for granted.

“Let’s be honest, the Bruins are one of the tough teams in the league every year and they’ll find a way to get through this, as well,” Kronwall said. “They’ve had a lot of injuries for a long period of time. They have guys back in the lineup but it takes time to get back into the swing of things.”

The Bruins lost 6-2 Saturday in Columbus, something that caught Babcock’s eye and jogged his memory.

“Last time we played they had lost and were in a bad mood (and defeated the Red Wings) and this time they lost to someone, so it’s not a good time to catch Boston,” Babcock said. “But we look forward to it. They’re a good team, a good, big team and well coached and they know how to play.”

Quite a few friends texted Nyquist to congratulate him on his overtime goal, in which he kept the puck for 28 seconds looking for any sort of space where he could shoot.

He finally scored late in overtime, one of the more memorable goals in his short career.

“It’s up there,” said Nyquist, who took over the team lead with 15 goals. “I haven’t scored too many but it’s up there. It was a fun goal to score, for sure.

As for the texts and tweets from friends?

“Little bit, they’re always happy when you score,” he said. “The big thing was, it was a big win for us to start off the road trip the right way. We have a lot of games on the road in January.”

Goalie Jonas Gustavsson (shoulder) took to the ice late in Sunday’s practice, took part in a few drills, then faced some shots after practice.

Out since hurting himself on Nov. 5, Gustavsson appears to be still two or three weeks away.

“I still have some work to do but it’s getting better,” he said. “I wish it would be quicker but you can’t force it. You just do your work every day and try to make it heal as much as possible.”