Zetterberg rallies Red Wings from 3 down to win

The Wings had a lousy first period then dominated the Sabres the rest of the evening.

Zetterberg rallies Red Wings from 3 down to win

Buffalo celebrates a goal by Chris Stewart in the first period. It was the Sabres' third goal of the game. David Guralnick/Detroit News
Fullscreen

Buffalo goalie Jhonas Enroth can only watch as the Red Wings celebrate a goal by Henrik Zetterberg in the third period. David Guralnick, Detroit News
Fullscreen

Detroit center Pavel Datsyuk and Buffalo defenseman Nikita Zadorov get tangled up while battling for the puck in the third period. David Guralnick, Detroit News
Fullscreen

The players celebrate with the fans after the game. David Guralnick, Detroit News
Fullscreen

Detroit left wing Henrik Zetterberg waves to the crowd after being named the No. 1 star of the game. David Guralnick, Detroit News
Fullscreen 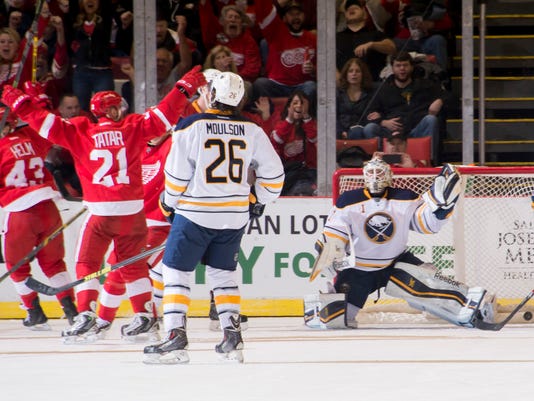 Detroit — The Red Wings had a lousy first period Sunday, then totally dominated the awful Buffalo Sabres the rest of the evening.

With Henrik Zetterberg doing a lot of the dominating.

Zetterberg scored three goals in the third period to break a 3-3 tie, helping send the Red Wings to a 6-4 victory.

"We just said we have to hit the restart button," Zetterberg said of the first period, when the Sabres took a 3-0 lead. "We had to start playing a lot hungrier. They won all the battles and we knew we had to play better to turn it around."

The hat trick gave Zetterberg 14 goals for the season, and was his sixth career three-goal game, his first since Feb. 1, 2003.

After emotional victories over powerhouses St. Louis and Nashville, Babcock wasn't entirely surprised about the lackluster start against Buffalo.

"We were embarrassed," Babcock said. "That was as bad as we've been. I wasn't totally surprised, this was a trap game. We played two real good teams and found ways to win, and in a back-to-back you don't get time to get organized and prepared like you should."

The Red Wings only allowed seven shots the last two periods (they allowed eight in the first period) with backup goalie Tom McCollum in net, just one sign of how lopsided the final 40 minutes was.

Petr Mrazek allowed three goals on six shots in the first period before being replaced by McCollum.

McCollum did allow a goal by Tyler Ennis (his second of the game) at 8:31, cutting the lead to 5-4, but was the beneficiary of the Red Wings' surge and earned his first NHL victory.

"Exciting," McCollum said of the moment. "Definitely it makes you hungry for more and hopefully I'll get another crack at it."

Zetterberg sent his third goal of the third period past Sabres goalie Jhonas Enroth at 11:59 to restore a two-goal lead.

But the Sabres looked good for a while.

Drew Stafford, Ennis and Chris Stewart (power play) scored Buffalo goals in the first 13:37 of the first period — three goals on six shots — driving Mrazek out of the net.

McCollum replaced Mrazek and was the beneficiary of a Red Wings second-period comeback.

Gustav Nyquist (power play), Drew Miller and Tomas Tatar scored in the first 10:08 of the second period, tying the game at 3.

"We knew if we were to get one (goal), the odds were we were going to get a few more," said Zetterberg, "and also if we start playing the way we should."

After a first period in which Buffalo outshot the sluggish Red Wings 8-5, the Red Wings outshot the Sabres 9-1 in the second period.

And even the one Sabres shot, by defenseman Andrej Meszaros, was a long dribbler that McCollum had no problem with.