But allowing three Wild goals in the third period to force overtime — the Red Wings had led 4-1 — it wasn't the type of victory they wanted.

NHRA Funny Car champion Matt Hagan gets a ride on the Zamboni between the first and second periods. David Guralnick, Detroit News
Fullscreen

Thomas Vanek – Many analysts couldn’t figure out this free agent signing, given Vanek’s reputation for inconsistency and declining production. But with 9 goals and 23 points in only 28 games, Vanek has been everything the Red Wings could have expected. GRADE: A-minus David Guralnick, Detroit News
Fullscreen

Detroit goalie Petr Mrazek takes a breather during a time out in the second period. David Guralnick, Detroit News
Fullscreen 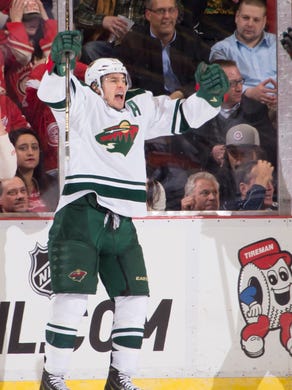 The Red Wings celebrate after winning the game in a shootout. David Guralnick, Detroit News
Fullscreen

Detroit — This was an exciting way for the Red Wings to go into the All-Star break but they gladly would have done without the excitement.

They defeated the Minnesota Wild 5-4 in a shootout, only their second shootout victory (2-7) of the season, which gave the Red Wings a five-game winning streak heading into the break.

But allowing three Wild goals in the third period to force overtime — the Red Wings had led 4-1 — it wasn't the type of victory they'll frame for its beauty.

Pavel Datsyuk and Gustav Nyquist scored for the Wings in the shootout while the Wild were blanked.

The Wild scored three goals in the third period, the tying goal by Zach Parise (his second of the period and 19th of the season), after he intercepted Ericsson's outlet pass from behind the net, then slipped the puck past Petr Mrazek at 13:21.

"We probably scored too easy," coach Mike Babcock said of the Red Wings' start. "We tipped pucks and pucks went in and we're up 4-1 and we really haven't played that great.

"Then you get standing around and waiting and the next thing you know, the game is tied.

"They did a lot of good things and we weren't great. But we found a way to win, which is real positive, and we won in a shootout, which is a positive for our team."

Parise on the power play, and Thomas Vanek, scored the earlier Wild goals in the third period.

After getting pulled in the first period Sunday, goalie Petr Mrazek rebounded with a 34- save performance.

This time it was Minnesota goalie Devan Dubnyk who was pulled, midway in the second period after allowing four goals on 10 shots.

But it was hardly all Dubyk's fault. Three of the four goals he allowed were either redirected or deflected, adding to the frustration the Wild (20-20-6, 46 points) have been feeling during a 10-game stretch (2-6-2).

Give the Wild credit, though, for a spirited comeback.

"When you're in that situation, down a few goals, you get that one goal and you get momentum," Zetterberg said. "That's what it got them. We're not happy with the way it ended in the third period but we're happy with the result in the shootout."

The Red Wings (27-11-9, 63 points) head into the break second in the Eastern Conference, having won seven of their last eight games, and playing some of their best hockey of the season.

" I don't think any of us would have believed we'd be at this spot, the general manager and myself included," said Babcock of the Red Wings' present spot in the standings.

"We went 5-0 into the break and in that time we played some good teams," Babcock said. "When Howie (goalie Jimmy Howard) got hurt, if you would have said Mrazek would be 4-0 and (Tom) McCollum 1-0, (goaltending coach) Jimmy Bedard would have probably called that but I don't think the outside world would have believed that much."

Pulkkinen opened the scoring with his first NHL goal at 9:09 of the first period.

Stephen Weiss made a nice drop pass to Pulkkinen between the hashmarks, and Pulkkinen blasted a shot past Dubnyk high into the corner.

The Wild answered with Miikko Koivu tying the score at 1 on the power play.

Seven seconds after Pulkkinen went off for goalie interference (13:22), Koivu beat Mrazek from the dot after the Wild won the draw.

But Ericsson regained the lead for the Red Wings with his second goal, a shot from the blue line that Dubnyk never saw with Justin Abdelkader screening in front and the shot appearing to deflect off a stick.

Nyquist made it 3-1 with his 19th goal, redirecting Niklas Kronwall's shot from the point.

Ouellet's second goal this season, at 7:25, drove Dubnyk from the net. But the shot bounced off the skate of Wild forward Justin Fontaine and past Dubnyk, making it 4-1.