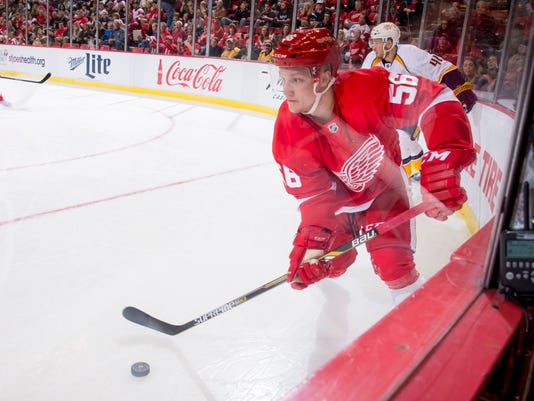 Detroit — While the snow was falling Wednesday around Detroit, many Red Wings players were on their way to climates nothing like they left here.

With the NHL officially on its All-Star break beginning after Wednesday's games, the Red Wings caught a break having their last game scheduled Tuesday, which turned out to be a 5-4 shootout victory over Minnesota.

With coach Mike Babcock and his staff deciding to cancel Wednesday's practice, it was off to the sun for many Red Wings players.

Florida, the Bahamas, Mexico, and Cancun appeared to be the popular destinations. All were more warm and inviting than cold, snowy Detroit through the weekend.

The only Red Wings player selected for the game Sunday in Columbus was goalie Jimmy Howard, who suffered a slight groin tear forcing him out of the Red Wings lineup and the All-Star Game.

The NHL opens back for business Monday afternoon — at which point the Red Wings will practice at Joe Louis Arena and immediately board a plane flying to South Florida to open a two-game road trip to Florida and Tampa Bay.

"The big thing now is just getting the guys away and getting them freshened up, so we can get ready for a (second half) push," Babcock said. "Just like you guys (the media), enjoying the time off."

Babcock, for his part, isn't going any place warm.

Babcock is headed to Muskegon to watch his son Michael, who plays in the United States Hockey League.

For the NHL, this is the first All-Star weekend since the 2011-12 season. The NHL locked out players two seasons ago, canceling the game, and was involved in the Sochi Winter Olympics last winter, wiping out any All-Star game.

"Everyone is looking forward to it," said Luke Glendening of the time off.

Glendening is heading to the Caribbean with his mother.

"I don't have a girlfriend," Glendening said.

Xavier Ouellet, on the other hand, is going to rest.

The two young players made the AHL All-Star Game while starring in Grand Rapids this season.

The two have been with the Red Wings recently, and weren't sure what their plans were going to be until after Tuesday's game.

Babcock said Ouellet has been bothered by a sore wrist, so the rest would benefit the young defenseman.

"It's a great honor and opportunity (to play in the AHL All-Star Game) but the other side is, if I'm going to stay up here, I want the time for my body to recover so I'm ready to compete," said Ouellet, before the decision was made. "It's a long, demanding season."

Pulkkinen scored his first NHL goal Tuesday, but was given areas where he needs to work on from Babcock.

"He has some things to learn," Babcock said. "We're going to send him down and he's going to play in the (AHL) All-Star Game. "I went through it with him. We'll send those (video) clips to Blash (Griffins coach Jeff Blashill), too, so Blash knows exactly what he (Pulkkinen) needs to work at.

"He has a dimension of shooting the puck and he's tenacious. He should be able to play in the NHL. He just has to fix some things."