Howard's first start since Jan. 10 got better as the night progressed. 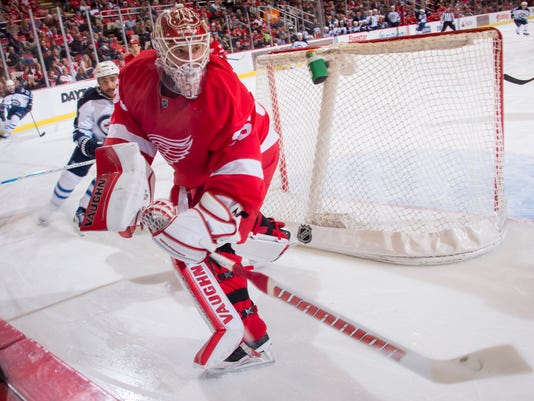 Jimmy Howard passes the puck away from the net in the second period.(Photo: David Guralnick / Detroit News)

Detroit — Jimmy Howard enjoyed returning to the lineup Saturday but didn't entirely like his game.

Howard's first start since Jan. 10, when he injured his groin, got better as the night progressed but ultimately ended in a 5-4 shootout loss.

Howard stopped 34 shots in regulation and overtime, and three of four in the shootout.

"As the game went along, I felt more and more at home out there," said Howard, who felt tracking the puck and timing were issues. "Sometimes I felt like I was a little ahead of the play. But that will all come the more I play."

Howard was at his best in overtime, particularly as Winnipeg enjoyed a power play to end the period.

The Jets had a 6-2 advantage in shots in overtime but Howard stood tall and appeared to be seeing the puck and playing with more confidence than earlier in the game.

"Kind of a little tough game (in the beginning) but in the end he made huge saves," Pavel Datsyuk said.

Jakub Kindl needs to play and it didn't look like he was going to do it with the Red Wings anytime soon.

So Kindl was loaned to the minor league affiliate Grand Rapids Griffins Saturday on a conditioning assignment.

Kindl is expected to return to the Red Wings in time for the team's trip to the West Coast beginning Feb. 23.

General manager Ken Holland said Kindl needs to play and this will give Kindl an opportunity for ice time he hasn't gotten recently.

Kindl injured his elbow on Dec. 28 and has been on the injured list or unable get into the lineup since.

Young defensemen Alexey Marchenko and Xavier Ouellet have passed Kindl on the depth chart in recent weeks, making Kindl a healthy scratch since Kindl was cleared to play.

In 28 games, Kindl has nine points (two goals and seven assists) with a minus-1 rating and 14 penalty minutes.

Kindl will play his first game with the Griffins Sunday in Chicago.

… The Red Wings have yet to lose consecutive games in regulation time this season.

…The Red Wings are 12-2-2 against the Western Conference this season.