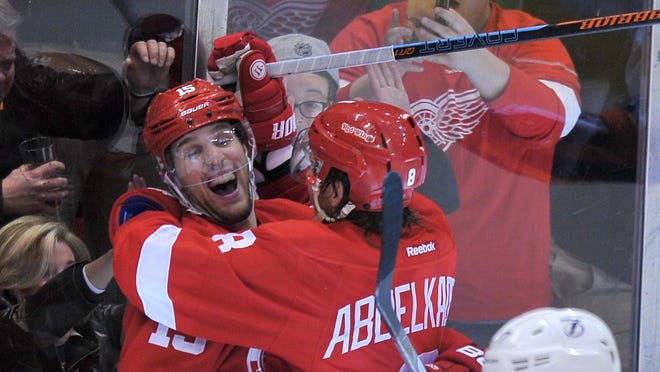 Detroit — Obviously it's not a great thing when Petr Mrazek can't finish a game and sent to the bench by coach Mike Babcock.

But it always seem to work the next game.

Pulled in Game 2, Mrazek came back Tuesday in Game 3 and was excellent — as was the rest of the team — as they defeated the Lightning, 3-0, and took a 2-1 lead in the best-of-seven first-round series. Game 4 is Thursday at Joe Louis Arena (7 p.m. Fox Sports Detroit).

Mrazek made made 22 saves and raised his record to 4-0-1 in games after he's been pulled this season.

But Mrazek appears to always come back strong.

"Huge win for our team," said Mrazek of Tuesday's victory. "First game at home (in this series), first win (at home in this series), but it's over now and we look (toward) Thursday now."

Pavel Datsyuk, Riley Sheahan (power play) and Luke Glendening (into an empty net with 48.6 seconds remaining) had Red Wings goals, and the penalty kill was outstanding, killing all six Lightning power plays (the Red Wings were 1-for-4).

Justin Abdelkader, in his debut in this series after missing the first two games with a hand injury, assisted on Sheahan's third-period goal, and was a physical presence.

Abdelkader and Brendan Smith (five hits, one takeaway) entered the lineup and gave the Red Wings a boost.

"Both of them are physical, determined and competitive guys," coach Mike Babcock said. "With Abby, it gave us three lines who are comfortable playing. It was a good game. That's what we expect, how we expect to play, and it was a good effort by our team."

Abdelkader was involved all game, and went after Lightning forward Cedric Paquette after Paquette tripped Mrazek in the third period.

That was moments after Mrazek stopped Brian Boyle on a shorthanded breakaway — the same kind of play Boyle scored on in Game 2.

"When I saw it, I thought the play was dirty," said Abdelkader of Paquette's trip. "There's no need for that. I took offense to that and I was upset about it."

Sheahan's goal at 6 minutes 42 seconds was the clincher.

Henrik Zetterberg brought the puck into the zone to the half-boards, and found Abdelkader trailing near the top of the circle.

"Just a great pass from Abdelkader there," Sheahan said. "We were a little more consistent out there, generated some more chances in the o-zone, and Mrazek played a good game."

Datsyuk opened the game's scoring in the first period on a play he essentially did everything on.

Datsyuk stole the puck near his blue line, drove down the ice, and found Tomas Tatar open near the point.

Tatar's shot was deflected by Datsyuk going to the net, the puck flying over Bishop at 8:46.

The goal was Datsyuk's second of the playoffs – his second credited goal in Game 1 being changed to Tomas Jurco earlier Tuesday morning, the puck deflecting off Jurco's body.

The Lightning had two power plays the remainder of the first period but failed to generate quality chances, with Mrazek turning away everything that came near him.

Again it was the Red Wings' penalty kill – with plenty of help from Mrazek – that stood out in the middle 20 minutes.

The Red Wings had all the

momentum early, a dominating shift by Joakim Andersson, Sheahan and Tomas Jurco getting the Joe Louis Arena crowd roaring and numbing the Lightning.

But the Red Wings began an endless parade to the penalty box — a problem during this series — and giving the Lightning life.