The Wings didn't relinquish any leads this time, winning 4-0 to take a 3-2 series into Game 6 Monday at Joe Louis Arena.

The two teams mix it up during a first-period scrum. David Guralnick/Detroit News
Fullscreen 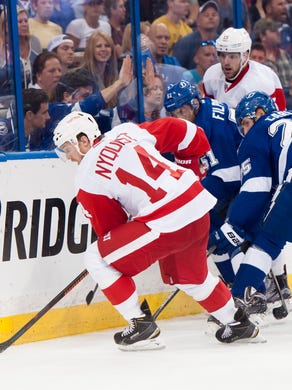 Detroit center Gustav Nyquist comes out of a scrum with the puck in the first period. David Guralnick/Detroit News
Fullscreen

Detroit goalie Petr Mrazek pokes the puck away from the net in the second period. David Guralnick/Detroit News
Fullscreen 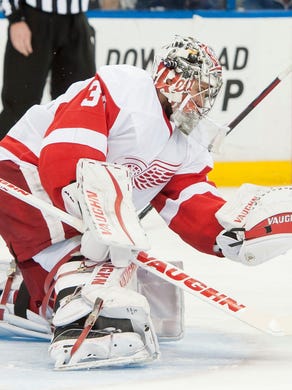 The Zamboni cleans the ice as the arena is lit up by fan held giveaways before the game. David Guralnick/Detroit News
Fullscreen

Detroit defenseman Brendan Smith, front, plays soccer with his teammates in the hallways of Amalie Arena before the game. David Guralnick/Detroit News
Fullscreen 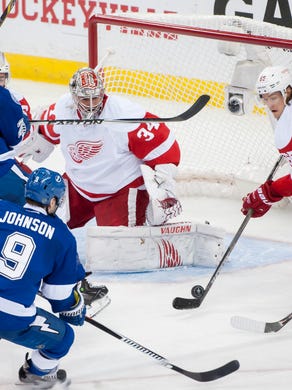 Detroit defenseman Niklas Kronwall hops over the boards during a line change in the third period. David Guralnick/Detroit News
Fullscreen

Fans display humorous signs as the Red Wings take a time out in the third period. David Guralnick/Detroit News
Fullscreen

The two teams mix it up during a third-period scrum. David Guralnick/Detroit News
Fullscreen

It may have been a gut punch the Red Wings took with that Game 4 loss but they responded with one of their own Saturday in Game 5, defeating the Tampa Bay Lightning 4-0.

The victory gave the Red Wings a 3-2 lead in the best-of-seven series. The Red Wings can win the series in Game 6 7 p.m. Monday at Joe Louis Arena.

Game 7 (if necessary) would be Wednesday at Tampa.

"It's always good to play playoff hockey at home and having a chance to get the fourth win in the series at home," captain Henrik Zetterberg said. "You can't beat that."

Losing the way they did in Game 4, allowing two late Tampa Bay goals in regulation time, then a quick overtime goal, seemed like it would be devastating.

But the Red Wings felt they had played outstanding hockey for about 55 minutes in that game, and simply wanted to carry over or improve upon that aspect of Game 4.

"We knew it wouldn't be an easy series for us," said goaltender Petr Mrazek, who stopped 28 shots for his second shutout. "Everything can happen in a series. Just keep it going, and we won today."

Arguably, it was the best game of the series for the Red Wings, who appear to be getting better while the Lightning are going the other direction.

"We played pretty good last game to tell you the truth but we didn't finish it off," coach Mike Babcock said. "Our last three games, we've been getting better and we want to keep getting better. That's what you want to do."

The Lightning, the league's highest scoring team during the regular season, have scored 10 total goals in five games and have been shut out two of the last three games and eight of the last nine periods.

"What's been frustrating is we haven't been scoring, and especially a team that is used to scoring," Lightning coach Jon Cooper said. "We have to find a way."

After an early Lightning surge in this game, the Red Wings gradually took control. They outshot the Lightning 30-28, didn't allow a shot for a span of 20 minutes 14 seconds at one point, and dominated the special teams, scoring two power-play goals (doubling their total for the series) and killing all three Lightning power plays (two in the third period).

"We went out there and played the way we knew we can," Miller said.

Luke Glendening put a shot on net that goalie Ben Bishop stopped, but he steered the rebound directly to Miller crashing the net. He put in the rebound for his first goal of the series.

Sheahan opened the scoring in the final seconds of the first period.

On the power play, the Red Wings won a battle for the puck behind Bishop's net and eventually worked the puck to Sheahan for a one-timer from the dot with 23 seconds left in the period (Sheahan's second goal of the series).

Datsyuk scored with his third goal, on a power play, at 15:47 of the third period, and DeKeyser ended the scoring into an empty net.

The Red Wings never really let the Lightning get into the game.

"We've been playing good in Games 3 and 4," Zetterberg said. "The way we were playing in those games, we knew if we'd play similar here, we'd have a good chance."