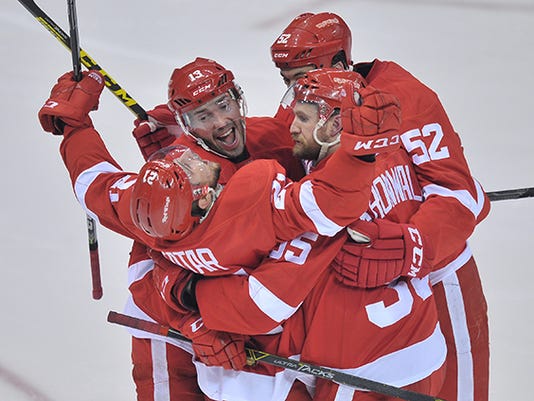 Ted Kulfan: They had their chance. The Red Wings had an opportunity to close out the Lightning, bask in a series upset victory, get some precious time off, and prepare for the Canadiens. But they didn't do it. Now they're the road team in what will be a tension-filled Game 7. And the Lightning are feeling good about themselves. It's been a valiant try. Lightning 3, Red Wings 1

Gregg Krupa: With Niklas Kronwall suspended, the Red Wings will be playing without one of their key leaders and top defenders. If they can clean up the mistakes of Game 6, they can still play well. But the Lightning's offense will likely prevail. Lightning 3, Red Wings 2

Bob Wojnowski: It doesn't get any tighter, tenser or unpredictable than this. Each team has won three games, two on the road. Each team has 15 goals. Each team has stretches of crisp play, followed by stretches of erratic play. To win a third time in Tampa, the Red Wings need the best from Petr Mrazek and a focused defense that pays extra attention to Tyler Johnson. As crazy as this series has been, it's a fairly logical conclusion, a Game 7 on the favorite's home ice. Lightning 2, Wings 1

John Niyo: Logic says they can't win without Niklas Kronwall now. But since when did this series make any sense? Ben Bishop hasn't looked great, and I'll stick with my pre-series prediction of Wings in seven. Wings 3, Lightning 2

Tony Paul: No team has won two games In a row in this series. In related news, Wings goalie Petr Mrazek hasn't had two clunkers in a row in these playoffs, either. But he needs some help from his defense, which hung him out to dry in Game 6. The Wings aren't as athletic or as fast, but they're been here before, in a Game 7. And that helps. Wings 3, Lightning 2 (OT)

Terry Foster: Expect the unexpected. That is how this series has been and that is the way it will end. We thought the series was over for the Wings after Game 2. But we blew taps on Tampa after Game 3. Red Wings 4, Lightning 2