This is the perfect fit. Who would have thought -- an international bridge named for Gordie Howe? 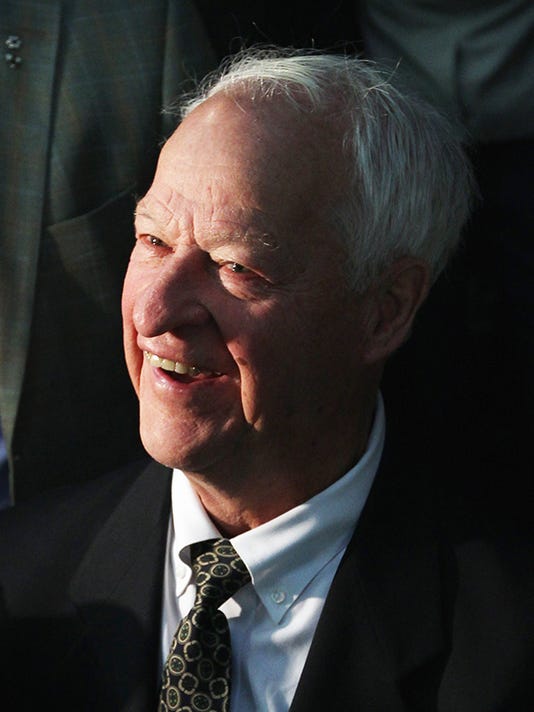 This is the perfect fit. Who would have thought -- an international bridge named for Gordie Howe?

Nothing more appropriate, because Gordie has had his own bridge for decades and was the primary cause that so many former NHL players, now senior citizens, have bridges of their own.

There were no records kept for the total number of teeth Gordie knocked out of rivals during his quarter century with the Red Wings and 32 years in major hockey total.

But Gordie has to be the all-time record holder. Back then, he was the foremost practitioner in all of professional sports for the subtle use of elbows and butt ends of hockey sticks.

Most of the time, the targets were the other guys' mouths.

Congratulations to the politicos of two countries for coming together on this bridge deal. Rarely is there such a sharing of acute imagination. Seldom is there such a friendly pact between nations as was reached in the naming of the eventual Gordie Howe International Bridge.

Oh, I got it now. This bridge is going be built spanning the Detroit River – a new connection between Detroit and Windsor – and not as part of some unfortunate Russian hockey player's mouth.

Naming a bridge for Gordie is a great, great honor for a former professional athlete.

It is an honor that those of us of an octogenarian bent cheer.

There have been two sports guys in my lifetime who rank above special.

Ted Williams and Gordie Howe played with exquisite skills before the beginning of my professional career in sports journalism.

And they waited around long enough so that I had the wonderful fortune to cover both for the Associated Press and then The Detroit News. Awe is the only word worthwhile to explain what it is like for a young sportswriter to sit down next to Williams or Howe and converse with them interview style.

The nouveau writers today – the bloggers who sit anchored in front of multiple TV sets, the ESPN dudes who invent clichés for our language, the Internet poseurs – they have no concept about old-fashioned digging and reporting.

In Boston, where I was schooled in journalism more than 60 years ago, there has long been a tunnel commemorating the name of Ted Williams. A tunnel seemed to be the perfect fit for Williams, too. He preferred to be silent and deep, except for the occasional display of bravado.

And now Gordie is destined to join Williams, commemorated for perpetuity with an artery for vehicular traffic.

They were the best of what they did in their eras, contemporaries with radically different personas.

Williams was dour, sullen – and terribly unpopular with a segment of the baseball fans of proper Boston. Mid-20th Century Boston journalists detested him, most of them.

Howe, during his playing years, was quiet – and deadly. In Detroit, we the media enjoyed his banter, admired his wit beyond his immense playing skills, grinned at his tart comments and pranks.

Gordie always seemed to get a joy out of playing his games, a joy that Williams seldom displayed.

Howe would see you in a hotel lobby and then take a circuitous route toward where you were standing. Just when you thought Gordie had vanished out into the street or the coffee shop, he'd greet you with an elbow hard into the ribs. Once he checked me into a wall.

I wonder if Ted Williams ever laughed.

Williams was devoted to his trade – which was hitting baseballs. Plain and simple.

He turned it into an art, and he was the connoisseur.

Williams was a young ball player who would hit .406 in his third Major League season in 1941.

"All I want out of life is that when I walk down the street folks will say, 'There goes the greatest hitter who ever lived,'" Williams famously proclaimed, and it was not youthful boasting.

And lots of folks said that. And no Major League batter has reached .400 in the 74 years since.

Gordie never issued such a braggart's proclamation. I'll say it now – in 2015 – there goes the greatest hockey player who ever lived.

"I was aggressive," Gordie said once in a post-career interview. "If somebody did something to me that wasn't fair, I'd retaliate. I guess I was a retaliator – someone you can't push around."

"Insofar as the clutch hitter is not a sportswriter's myth, he is a vulgarity, like a writer who writes only for money. It may be that, compared to managers' dreams such as Joe DiMaggio, and the always helpful Stan Musial, Williams is an icy star. … It is an essentially lonely game."

There are teeth to that quality of writing.

Funny, Williams was never quite respected in Boston until it was much too late. He responded with unfriendly, sometimes obscene, gestures. Howe retaliated in a more subtle fashion.

One Sunday afternoon in the Boston Garden, Howe was being taunted by loudmouth Bruins fan. This gibes were tossed at Gordie in the first period, more in the second period. The baiter by the third period was standing up and leaning above the boards.

The flow of the game went down to one of the corners. That was when Gordie lingered behind. The guy stood up to mouth some more at Gordie. Gordie neatly jabbed his hockey stick over the boards and tapped the guy on the forehead a couple of times. Drew blood. No penalty.

I could witness the entire scene from the pressbox above, across the ice.

Gordie and Ted – two guys from a personally cherished era of sports joy. Guys who traveled different roads – and now remembered, soon, with roadways bearing their names. A tunnel in Boston, a bridge for Detroit.