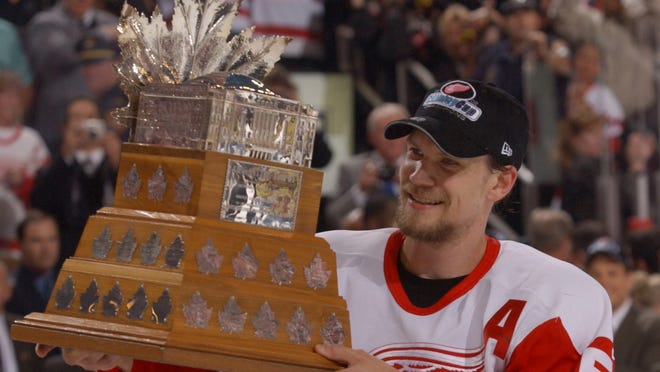 Detroit – Nicklas Lidstrom and Sergei Fedorov are headed to the Hockey Hall of Fame.

The two legendary Red Wings stars were eligible for the first time this year and both were voted in Monday.

The class will be inducted on Nov. 9 in Toronto.

Ruggiero played for Team USA in 10 world championships and four Olympics, winning a gold medal at Nagano in 1998. She retired as a player in 2011.

Karmanos, the longtime CEO of Compuware, is majority owner of the Carolina Hurricanes. He also owned the OHL's Plymouth Whalers before the team moved to Flint. He was elected to the Hall of Fame in the builders category.

Lidstrom had one of the greatest careers of any NHL defensemen.

One of the shrewdest draft picks of all time, the Red Wings selected Lidstrom in the third-round (53rd overall) in 1989 out of Sweden.

"Our scouts really liked him," said Red Wings senior vice president Jim Devellano. "They said he needed to mature physically, but they felt he had good ability, maybe had the talent to play in the NHL. We were confident not many people (in the NHL) knew about him.

"We felt comfortable taking a gamble. (But) we had no reason to believe Nicklas would turn out to be such a player. Let's be realistic."

Lidstrom won the Conn Smythe Trophy (playoff Most Valuable Player) in 2002 – the first European to win that award – and was a 12-time participant in the NHL All-Star Game.

Lidstrom was captain of the Red Wings for the final six seasons of his career, becoming the first European-born captain to win the Stanley Cup.

"During my hockey career I was always focused on the next game or the next season, so I never allowed myself to imagine I'd be hearing from the Hockey Hall of Fame," said Lidstrom. "I took a lot of pride in being dedicated to the game, so it means a great deal to me to be recognized by those who know the game the best."

As for Fedorov, few players were as electrying and dynamic on the ice, his skating ability arguably the best of any player in NHL history.

Fedorov spent the first 13 of his 19 NHL seasons with the Red Wings, where he enjoyed his most success.

A three-time Stanley Cup winner in Detroit (1997, 1998, 2002), Fedorov was a six-time NHL All-Star and in 1994 capped an outstanding season by winning the Hart Trophy (Most Valuable Player) and Pearson Award (MVP as voted by players).

"I have always played hockey because I loved it, not because I wanted to win awards," said Fedorov. "But now that my career is over I realize how special it is to be recognized by the Hockey Hall of Fame. I am deeply honored to be an inductee."

Always regarded as one of the best all-around forwards to ever play, Fedorov won the Selke Trophy (best defensive forward) in 1994 and 1996.

Fedorov was a major piece in the Red Wings' rebuilding project under Devellano. In 1989, the Wings picked Fedorov 70th overall in the fourth round, then assisted his defection from the Soviet Union in a daring escape.

"We all knew that Russia had a wonderful supply of hockey players; Czechoslovakia, too," Devellano said. "But you couldn't get the buggers out. It really bothered me when we'd be drafting in the third, fourth, fifth round and we'd be taking North American players and really our scouts weren't that high on them. Finally, I remember sitting with Kenny (Holland, current Red Wings GM) and Neil Smith, who were our lead scouts at the time, and saying 'Who's the best 18-year-old player in the world?'

"They both said, 'Sergei Fedorov.'"