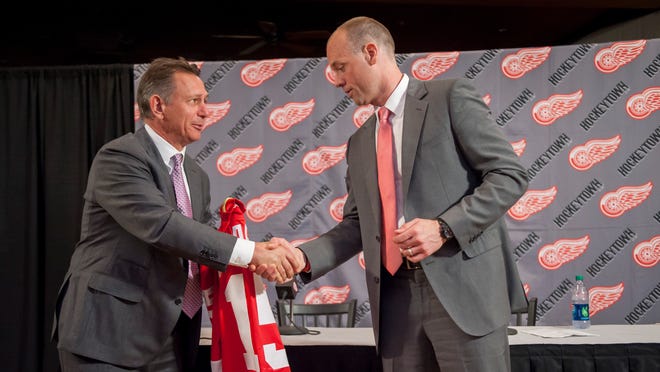 Plymouth — Those who know him and have played for him say Jeff Blashill is not as “fiery” as his predecessor.

He might not display intensity as he approaches to shake your hand, like Mike Babcock. But ask the new Red Wings coach about the job, and Blashill’s passion pours out part way through the first answer.

Throughout a 35-minute interview, he was eager, forceful and zealous.

He believes he can motivate the long-established veteran core, if required. He said the team requires small improvements in multiple areas of play, and one or both goalies must excel.

And, ultimately, Anthony Mantha is likely to be a fine player.

By Friday, Oct. 9, when the Wings open the season against the Maple Leafs, the players all should have a pretty good idea of what to expect from the second youngest coach (by 16 months) in the NHL after dealing with one of the most demanding for a decade in Detroit.

As he stopped by the Compuware Arena, not far from his new home, to pay a son’s fees for his upcoming hockey season, Blashill discussed coaching the Red Wings.

Q. A busy time, for you, in the days and weeks since you got the job. What have you been doing, since the announcement?

A. Yeah, it’s a dual business in a sense that there’s a professional side of it, certain duties that you want to do and you’re excited about the job and the challenges. And then there’s the personal side of it: Selling the home in Grand Rapids, buying a home, getting the kids set up with school activities.

After the press conference, the first task was to contact the leadership, talk to Henrik Zetterberg, talk to Niklas Kronwall, talk to Pavel Datsyuk. And then, down to the draft ...

And then, obviously, the big day coming back over for free agency and preparing for July 1, and sitting with the pro scouts and Ken’s management team and myself and try to decide what the best course of action is.

In all that time, kind of driving back-and-forth between Grand Rapids and Detroit.

From there, I wanted to go up to the development camp. So, I was up there during the whole time in Traverse City (where he also was grand marshal for the National Cherry Festival parade and took some vacation time.)

I did get a chance to sit down with our staff at Joe Louis Arena, for two weeks in an orientation period for myself; a re-introduction to how everything works. We had the training staff, the equipment staff, the office staff all in to sit down with us.

Now, I’m back here, starting to close on a house.

The nice thing about coming back is that you are going to a place where you’ve been.

Q. Have you had time to talk to all the players?

A. I have not and, for the most part, what I’ve tried to do is to make sure I have a message by the time I speak to them.

So, some of that had to wait until we see how certain things shake out.

I’ve kind of pieced and parceled, and spoke to different guys at different times, when I felt there was a real urgency from my standpoint to say something.

I’ve had texts, conversations, with almost all of them at one point or another.

Q. You have talked publicly about the leadership group. You are about their age. That is a little bit different from Mike, who worked with them for a decade. What are you trying to do with those three guys, as you get started?

A. One of the attractions about the job is that we have three great leaders. The jobs that are most difficult are the ones where your best players, your leaders aren’t good enough to lead by example ...

I have coached guys at similar ages to where these guys are, and in (Griffins 37-year-old captain) Jeff Hoggan’s case, older than any of these guys are. So, I have experience in that.

I like to get players’ input on schedule, travel, hotels, days off. They are the ones, ultimately, who have to play. I want to know what they think.

Ultimately, what do you guys want to do?

There are certain things that aren’t flexible, at all: How hard you work, every day. Your attention to detail, every day. Those are things I’ll never flex on.

Q. Can Jeff Blashill motivate those three big stars, if they need motivation? Do you feel confident you can have that relationship with them?

I also understand that everybody reaches their maximum potential when they’re held accountable on a daily basis. But that can be done lots of different ways.

Whatever it takes to make sure that I’m holding every player on our team accountable, that’s my job to do. It’s just the fashion in which you do it can change, and it can change by the player ...

Q. Looking at the roster and going into the season, what is your biggest concern? Is it getting the puck out of the zone, retrieval and getting the offense going?

The number one thing is we have to create more chances than we give up, which ultimately leads to getting more goals than you give up. And I know that sounds simplistic, but it is not ...

How do we create those chances? Certainly, we have to be as fast out of our own end as possible. Whether that’s from moving the puck out, right away, whether that’s great D-zone coverage to break it up, those are things that are paramount to success.

I think when I look at the number of goals scored by the Red Wings last year, it was up there. But there was not enough goal scoring. We’re like everybody. But we have to get a little bit better defensively, and we have to try to increase our scoring a little bit …

We’ve just got to make sure we’re at our best on a more consistent basis than our opponents.

Q. Defenseman Mike Green, acquired as a free agent, has a fine offensive resume. However, his coaches expressed a concern about his defense. How do you think Green will work out?

A. I just talked to him the other day. I went back and watched a bunch of his shifts, and he’s my kind of player in the sense that I like a defenseman who can move the puck. And as I said when we signed him, the best defense is getting back the puck and moving it out of your zone.

And I think he does that very, very well.

So, I don’t tend to look at what players can’t do. Now, we certainly want to get better in areas that they need to get better at.

I always judge players on did they make more positive plays than negative plays ...

So, I’ve had this conversation with Mike: I want to be able to play him against the other team’s best players. I think that’s the kind of ice time he can demand. ... And as long as all those negative plays aren’t going in our net and he’s creating more positives than negatives, then I think he’ll find his way to lots of ice time.

Q. There is a more competitive situation in Detroit with the two goalies than there has been in several years. As a former collegiate goalie, are you better informed about their psyche?

I know for sure, you can’t win without elite goaltending. The way that everyone’s so close now in the NHL, we have to hold them to that standard …

Now, they both have to go out and execute, in order to be elite goaltenders. And, if we don’t have that, we won’t be good enough …

Both of them will have the opportunity to prove that they can be the guy.

Q. What do you expect your players to be doing, as we speak?

A. I think that the standard for players in the NHL is that you work very hard in July to prepare your body, strength training, fitness training, working off the ice, right now.

Some guys might be working on one particular skills thing, at this time, to improve on that point.

What I say to our guys is everybody in the NHL works hard. If you want to either stay on top or pass guys who are ahead of you, you better outwork the rest of the guys in the NHL. And that’s extremely hard to do ...

Accountability is at the forefront of team and individual success.

Q. You coached Anthony Mantha for a season. What is your assessment?

A. First of all, the expectation level on Anthony was too high, and in part that was his fault. When you have a career like that in juniors, the expectations are too high.

He got hurt two times during the season, and that made it difficult on him — especially at the beginning of the year, when you are establishing good habits. And then right before the playoffs, in June.

I think Anthony has a skill set that will allow him to be a great player.

I think Anthony still needs to learn to work as hard as you have to work, shift in and shift out, moving his feet, in order to utilize that skill set at the American league level and the NHL level. And it would have been impossible for him to realize he had to do that at the junior level, because he didn’t have to.

Until you’ve faced a level where you actually have to, you’re never going to make those adjustments ...

Q. Is there a specific thing Dylan Larkin needs to be working on, this year?

A. Faceoffs for sure.

I think Dylan just needs to continue the path that he is on.

My understanding is Dylan is working out with Luke Glendening. So, if you’re doing that, I know you are working at an extraordinary level ...

I think anything Dylan can do to continue to increase his scoring touch and those little types of things will help him.

Q. Anything surprise you yet?

The one thing I’d say to that is the path that I have taken to get to this point has really helped in the position where I am sitting today.