Kindl never earned the trust of former coach Mike Babcock, and last season felt like a bottoming out. 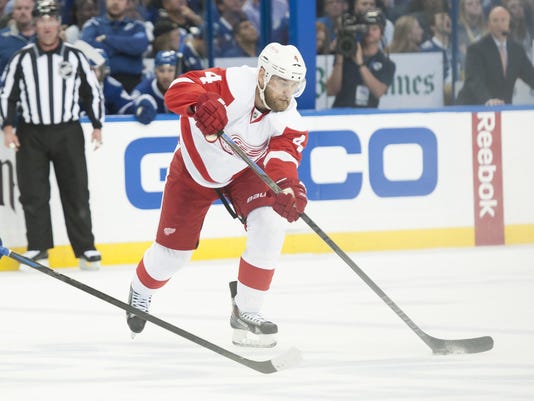 East Lansing — A new hockey season, a reboot to a hockey career.

That's what Red Wings defenseman Jakub Kindl believes this season could be for him.

Kindl never earned the trust of former coach Mike Babcock, and last season felt like a bottoming out, as he played in 35 games and just one during the playoffs.

Always a subject of trade rumors, Kindl now finds himself back in Detroit.

"It's a fresh start, not just for me but for everybody," Kindl said after an informal workout Tuesday at Michigan State's Munn Arena. "Everybody is at the starting line all the same, and at the end of the day it's a competition."

"It was tough," Kindl said. "But I was trying to be a good teammate and support the guys at the rink. Some things you can't control, so I just went to the rink and stay positive and it feels like a fresh start."

Kindl, at 6-foot-3 and 215-pounds, possesses the size and skating ability that intrigues the Red Wings. And he knows new coach Jeff Blashill will give him a fair shot.

"He's got great ability," Blashill said in July. "He's done a good job persevering through tough times over the last few seasons. Hopefully he's putting himself in a good position to compete for a spot in training camp."