Ferraro's return to Detroit with Bruins 'a little weird'

It was strange indeed for Landon Ferraro, as he was warming up with his Boston Bruins teammates.

Ferraro's return to Detroit with Bruins 'a little weird' 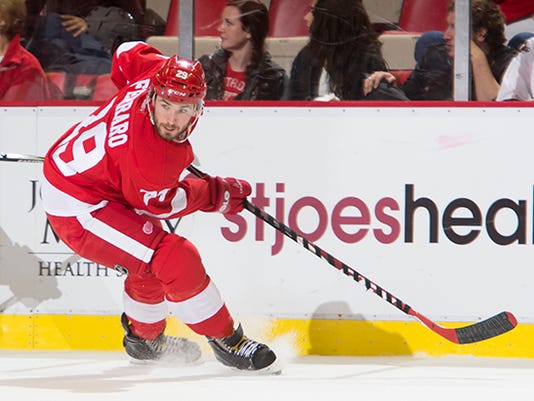 Detroit – It was strange indeed for Landon Ferraro, as he was warming up with his Boston Bruins teammates, getting ready for Wednesday night's game at Joe Louis Arena.

Not even an entire week ago, Ferraro was dressing in the Red Wings locker room just steps down the hall.

On Wednesday, Ferraro was warming up with the Bruins, the team that claimed him off waivers Sunday.

"A little weird for sure," said Ferraro, who earned an assist in eight minutes of ice time Monday in his Boston debut. "Going out to play soccer (in the hallway) and seeing people walking by, saying hi and well wishes, it's weird, but it's exciting (the opportunity with Boston)."

The Red Wings exposed Ferraro on waivers last weekend knowing he was ready to return from a knee injury, but they had too many players for too few roster spots.

Ferraro, 24, a 2009 second-round draft pick of the Red Wings, played in 10 games with the Red Wings but didn't have a point and was struggling to gain a permanent spot in the lineup.

Going to the Bruins – had he not been claimed, Ferraro was headed back to the minor leagues in Grand Rapids – Ferraro sees an opportunity for himself to show he can play in the NHL on a regular basis.

"I'm on a team I have a bit more of a chance, and I can play a bit more and try and contribute," Ferraro said.

Ferraro had nothing but good things to say about coach Jeff Blashill; Ferraro credits the Wings coach for his development as a player.

"Blash has been a big part of where I am today," Ferraro said. "When he got to Grand Rapids, I was trying to figure out how to get to the next level and what kind of player I needed to be on the ice.

"Blash was a big help in that and I appreciate everything he's done."

No damage to DeKeyser's game

Danny DeKeyser was back at practice Wednesday morning after needing 10 stitches after taking a puck to the face the day before.

DeKeyser also was hit in the face on a deflected puck Friday against the Los Angeles Kings.

"It's been a rough week, the puck has been finding a way to get to my face," DeKeyser said.

Regardless, Blashill feels DeKeyser played one of his best games Saturday in St. Louis.

"He did an exceptional job of breaking the puck out of our zone," Blashill said. "There were three or four times where he wheeled the net with the puck, shook off a forechecker, and made the pass.

"When he does that, he's an elite defensemen in this league."

Wednesday's game will be the 200th consecutive sellout for the Red Wings at Joe Louis Arena.

... Another Bruins player who thinks highly of Blashill is defenseman Torey Krug (Livonia / Michigan State), who played for Blashill in junior hockey in Indianapolis.

"I owe a lot to Blash, he's the one who opened the door for me and gave me a chance," Krug said. "He's well prepared, loves to talk to hockey and he's always adapting to the game."