Red Wings get greedy with puck upon Datsyuk's return

Red Wings get greedy with puck upon Datsyuk's return 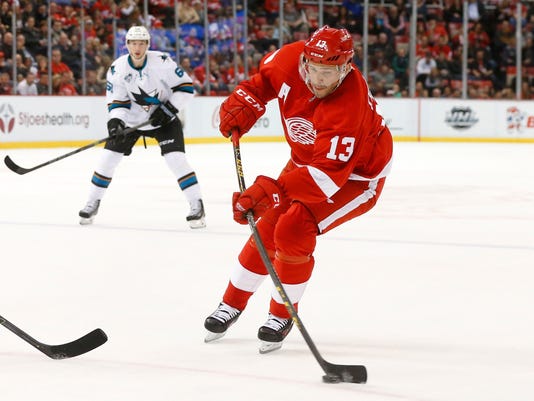 Detroit — Pavel Datsyuk’s return to the Red Wings' lineup is a boost for the team's fortunes, especially the lagging offense.

No one is noticing it more than Dylan Larkin and Teemu Pulkkinen, who have little experience, between them, playing with Datsyuk. Meanwhile, the young pair are already a considerable part of the Wings offense, with 14 of the team’s 51 goals — 27.5 percent —  entering Friday's game against the Oilers.

“It just adds another threat,” said Larkin, 19, who had no experience on the ice with Datsyuk before the 37-year-old returned. “I think our puck possession is way up since he’s been around.

“Obviously, whoever plays with him, all five guys on ice are better players.”

For the 23-year-old Pulkkinen, assigned by Coach Jeff Blashill to play on Datsyuk’s line along with the veteran playmaker Brad Richards, there is plenty to notice and absorb.

“He’s such a good player on both ends, offense and defense,” Pulkkinen sad. “That’s what he does. He’s so great at winning puck battles, winning stuck battles for sure. He’s just a special player.”

Datsyuk has two goals and an assist since he came back from ankle surgery seven games ago. But his contributions outpace his statistics, so far, and the points are starting to come.

Larkin said that in addition to learning by watching Datsyuk, the veteran has had some words of advice, too.

“Just puck possession,” Larkin said. “You know, he’s scored some goals and he’s been carrying the puck a lot.

“Played with him for a few games and he really told me to hold on to the puck and don’t throw it away, and we can wear them down in the cycle.

Pulkkinen said Datsyuk’s emphasis, if not obsession, with puck possession is striking.

Out of town media often asks Larkin about playing lots of games in the NHL, compared to his brief experience in the AHL, at Michigan or a few seasons in juniors in the U.S. National Development Team Program, where there were comparatively few.

“I enjoy playing a lot of minutes and skating and opening up space for Abby and Hank,” he said of his current line mates, Justin Abdelkader and Henrik Zetterberg. “So just trying to keep the same energy level.

“I love playing games more than practice,” Larkin said, with a bit of a smile. “In college, some of the practices we’re pretty tough. I guess the back-to-backs after a long week are pretty tough, but it’s fun. I like to play in them.”

Datsyuk’s return, along with Richards, allows the Red Wings to accentuate their depth at forward, including placing Datsyuk on the line with Richards and Pulkkinen.

It is a slot any young player with a hard shot — and Pulkkinen possesses a boomer — would desire.

“Richie and Pavel they’re both really good overall players and passers," Pulkkinen said. "So my job is play hard, play with energy, forecheck hard and maybe win some pucks for us.

“And then, find the open shots. Because those guys, they can really pass.”

Pulkkinen also said that while the season has opened well, for him, he is interested in playing every day for the Wings on a permanent basis. And that takes more work.

“It’s nice so far, but it’s just 20 games,” Pulkkinen said. “It’s a long season and you have to work hard. I don’t want to be that guy who plays 20 games. I want to play all of the games.

“I know we have a great team. We have great players, so I just have to work hard every night to stay in the lineup, and that’s what I’m doing right now.

“I’m enjoying my time and working hard on the ice and off it.”