The 12-year veteran had a game to remember. Kronwall saved the Red Wings in overtime with a winning goal.

Detroit head coach Jeff Blashill keeps an eye on his players before the start of the game. David Guralnick / Detroit News
Fullscreen

Detroit defenseman Niklas Kronwall checks Edmonton center Mark Letestu in the first period. The collision caused a brief pause in the game as the two teams fought with each other. David Guralnick / Detroit News
Fullscreen

The two teams mix it up in the second period. David Guralnick / Detroit News
Fullscreen 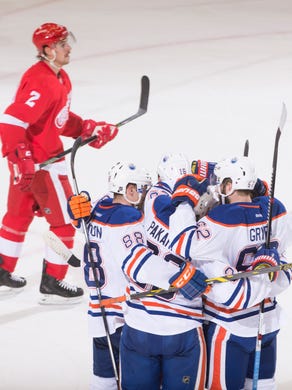 Detroit — It has not been an easy early season for Niklas Kronwall.

But Friday night the 12-year veteran had a game to remember.

Kronwall saved the Red Wings in overtime with a winning goal. It came on a night his big, violently abrupt body checking along the sideboards in the opponent’s offensive zone rematerialized.

He also blocked four Oilers shots as Edmonton began asserting itself offensively — and nearly stole yet another game from the Wings.

With Kronwall’s big boosts, the Red Wings prevailed in overtime, 4-3.

“I thought the first, what, 35 minutes or so, we did a lot of good things,” he said. “We kept shooting the puck, got some opportunities, had a lot of zone time. But, we’ve got to find a way to score some more goals there.

“I thought we had some opportunities, but then they got the momentum going. We got too much on our heels – stopped playing, really. The third (period) wasn’t very good either ... But, all in all, we dug deep and found a way to get two points.”

Coach Jeff Blashill and the Red Wings faced a lot of similar questions again about all of the hard work on offense that has seen them put up 64 shots in two games, and struggle to emerge with three of a possible four points.

It was quite nearly only two of four.

With the Lightning losing in regulation and the Islanders in overtime, the Red Wings managed to move up a slot in the Eastern Conference to the second wild-card position, at 12-8-3.

“It is a league you’ve got to find a way to two points and we needed those two for sure, especially giving up the lead, there,” Blashill said.

“I thought the first half of the game we played really, really well. I didn’t like the last eight minutes or so in the second. I didn’t like us enough in the third.

“We’ve got to be better than we were for the second half of the game.”

He contrasted the win with Wednesday’s overtime loss to the Bruins, one of a series of late-game failures this season for the Wings.

That game, especially from puck possession standpoint, was probably the best of the season for the Red Wings.

The frittering away of their two leads against the Oilers was far from one of their better performances — especially with the defensive breakdowns.

“Tonight, we were a little bit immature,” Blashill said. “We can’t make big mistakes that lead to easy goals.

“Actually, all three, whether it was on the penalty kill or the two 5-on-5 goals, were big mistakes that led to easy goals. You can’t do that. If you do that you don’t have great chances to win.

“We’ve got to continue to mature as a hockey team and win those games in regulation. It’s process, and it’s something we’re going to have to get better at.”

Blashill was pleased for Kronwall.

“The big hit was great, he’s pretty special when it comes to that,” the coach said.

“You know, I think it’s something good to see after the suspension of last year, and him getting that back in his arsenal.”

Kronwall sat for the seventh game of the series against the Lightning, which the Lightning won last season, over a disputed play and a similar check.

The NHL ruled one way. Kronwall and the Red Wings were incredulous.

“When he’s playing the way he’s capable of, I think he’s an elite defenseman in the league. I think he’s a one (top defenseman) — because he’s good offensively, he’s good defensively and he’s a big time winner.”

And, big on the scoresheet once again was Dylan Larkin, with an even-handed goal to restore the Red Wings lead- at 3-2 with 36 seconds left in the second period, and a fine cross-ice pass to assist on Kronwall’s goal just 26 seconds into overtime.

“We were just talking and (general manager) Ken Holland said this: When (Larkin) gets the puck he rarely makes a bad play with the puck,” Blashill said.

“He’s still got things to learn away from the puck, stopping on pucks, stopping back in his defensive zone, things like that. But that’s our job as coaches to help him with that.

“He makes real good decisions with the puck. He is able to make plays at real high speed.”