The Red Wings had a pretty good month of January but goaltender Petr Mrazek had an even better one. 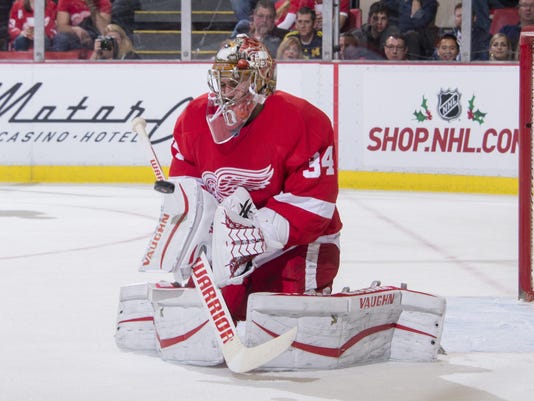 Detroit — The Red Wings had a pretty good month of January but goaltender Petr Mrazek had an even better one.

The Red Wings were 7-3-1 in the month, despite a heavy road schedule and facing some of the hotter teams in the NHL currently.

But they can thank Mrazek for much of their success.

Mrazek was one of the best goaltenders in the league for the month of January, going 7-1-1 in his nine starts — the seven victories all coming on the road — with a sky-high .952 save percentage.

If there was any doubt who coach Jeff Blashill considers the No. 1 goalie at this point, just look at the workload between Mrazek and Jimmy Howard.

Howard only got two starts during the month — losses to Los Angeles and Anaheim.

Blashill felt Mrazek’s performance during the month specifically, but also most of the season, put the young goaltender among the best goalies in the NHL.

As the NHL approaches its All-Star break, Mrazek ranks among the league leaders in the major goaltending categories:

■ His three shutouts are tied for 10th.

“He’s given us a chance (to win) most every night,” captain Henrik Zetterberg said.

Justin Abdelkader penned a first-person account for playerstribune.com about earning a college degree, which Abdelkader completed last spring with a degree in business management.

Abdelkader wrote the process wasn’t easy — Abdelkader left Michigan State in 2005 to sign with the Red Wings — but well worth it.

“It was a grind,” Abdelkader wrote in his playerstribune.com essay. “But whenever I wanted to give up, I kept thinking about all the hours I spent doing Excel spreadsheets after hockey practice at Michigan State. There was no way I was throwing away three years of hard work for nothing. As a pro, you see the reality all the time. Guys come and go. Hockey doesn’t last forever.

“It’s a great feeling knowing that I didn’t just go to college – I graduated.”

Blashill, who head coached at Western Michigan and assisted at both Ferris State and Miami (Ohio), isn’t surprised by Abdelkader’s dedication to education.

“He has a great family, I know the family well, and I’m sure they impressed upon him from a young age how important education is — and it is,” Blashill said. “You never know when that education will come in to be a real factor for you. I’ve known a lot of guys who’ve done a good job going back, Andy Miele (Grand Rapids Griffins) went back and got his degree at Miami.

“When you commit to college and play hockey, if you leave early or if the schedule dictates you don’t get your degree, it’s extremely important to go back and get it (degree). You put so much time into getting it, make sure you get it.

“I was real happy for Abby.”