Foote on Draper: He turns my stomach

So much for a civil runup to tonight's Red Wings-Avalanche alumni game.

Foote on Draper: He turns my stomach 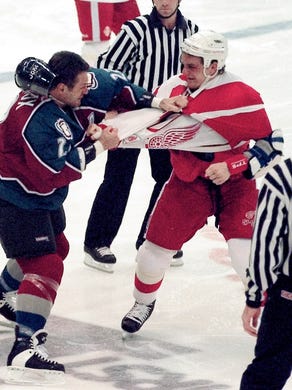 Claude Lemieux of the Colorado Avalanche and Darren McCarty of the Detroit Red Wings mix it up in March 1997. The teams' historic rivalry will be replayed Friday during an outdoor match in Denver. Alan Lessig, Detroit News
Fullscreen

Steve Yzerman celebrates his first goal of the night during the Wings' 4-0 win over Colorado during NHL playoffs on May 9, 1999. David Guralnick, Detroit News
Fullscreen 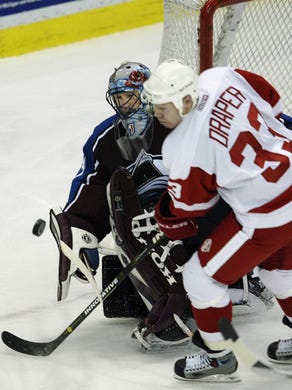 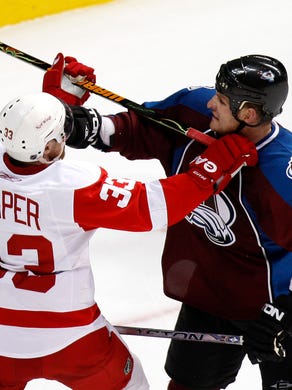 Detroit's Kris Draper and Colorado's Adam Foote mix it up in the third period during the Western Conference semifinals at the Pepsi Center in Denver, April 29, 2008. David Guralnick, Detroit News
Fullscreen 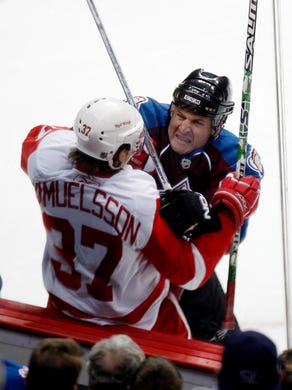 Red Wings' Mikael Samuelsson is pinned against the glass by Avalanche's Adam Foote in the first period of Game 3 of the second round playoff series on Tuesday April 29, 2008. David Guralnick, Detroit News
Fullscreen

Colorado's Peter Forsberg can't get the puck past Detroit goalie Chris Osgood in the third period of a game between the Red Wings and the Avalanche during the Western Conference semifinals n Denver, April 29, 2008. David Guralnick, Detroit News
Fullscreen 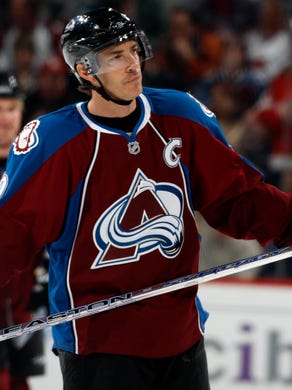 Colorado Avalanche center Joe Sakic looks to the bench during the second period of Game 4 of the NHL Western Conference Semifinals against the Detroit Red Wings in Denver May 1, 2008. Jack Dempsey, AP
Fullscreen 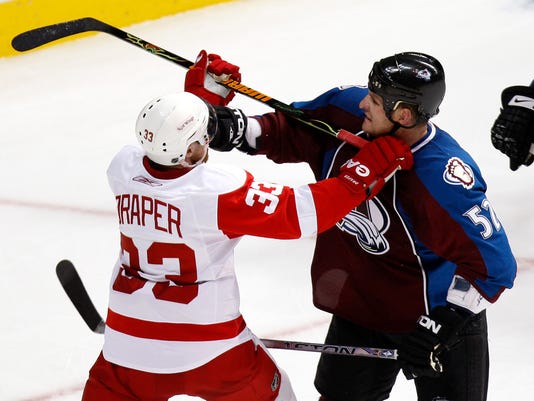 Detroit's Kris Draper and Colorado's Adam Foote mix it up in the third period during the Western Conference semifinals at the Pepsi Center in Denver, April 29, 2008.(Photo: David Guralnick, Detroit News)

So much for a civil runup to tonight's Red Wings-Avalanche alumni game.

In an interview on ESPN 104.3 The Fan in Denver, when asked whom he'd most like to punch in the face the Avs' Adam Foote replied without hesitation the Red Wings' Kris Draper.

"Draper for sure," said Foote, when prompted by hosts Mark Schlereth and Mike Evans who suggested the former NHLer would be "putting on the foil" for the alumni showdown at Coors Field (7 p.m. FSD/97.1).

"There's something about him that turns my stomach the wrong way."

Foote shed some insight on the Claude Lemieux hit on Draper, which set the tone for the bad blood in the heated rivalry.

"The first year we won the Cup was in 96, it's all when it it all went down," Foote said. "Lemieux hit Draper from behind. It was kind of an awkward position.

"Lemieux was frustrated simply because of the way the game was going. Detroit knew they were going to lose that series. Bowman was setting the table for the following years, in my opinion. Earlier in that game, I got hit from behind by (Vyacheslav) Kozlov and took 20 stitches."

Foote didn't mince words about the rivalry, suggesting the way the Wings carried on about the hit during the summer fueled the animosity.

"Foote doesn't like me; I don't like him." Draper said. "... If this puts a little more intensity into the game, I've got no problem with it all."

The Wing alumnus didn't think there would be any fights, though.

"I think there is going to be a little bit different tone than most alumni games because of the history of both organizations," Draper said. "The bottom line is, listen, we want to win this game, no doubt about it."

Draper: "If he (Foote) doesn't like me, that's fine. I would be surprised (on fights tonight). We want to win this game. Really want to."