This defeat wasn’t as ugly as Saturday’s for the Red Wings, but in a way, it might hurt more.

Detroit Red Wings players and coaches look on from the bench in the last seconds of the third period. Graham Hughes/The Canadian Press via AP
Fullscreen 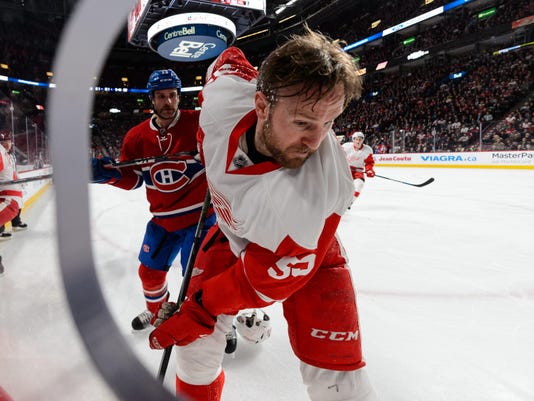 Mike Brown of the Canadiens roughs up Niklas Kronwall of the Red Wings near the corner.(Photo: Minas Panagiotakis / Getty Images)

Montreal — This defeat wasn’t as ugly as Saturday’s for the Red Wings, but in a way, it might hurt more.

The Red Wings fell behind, rallied on the strength of three second-period, power-play goals, then lost the lead and game in the third period as Montreal defeat the Red Wings, 4-3.

Instead, the Bruins remain a point ahead of the Red Wings (88-87) with both teams having five games remaining.

In the wild-card chase, the Red Wings trail the New York Islanders by four points (91-87) but are tied with Philadelphia in points (87). Both the Islanders and Philadelphia, though, have played two fewer games than the Red Wings.

“It’s disappointing for sure,” Red Wings coach Jeff Blashill said. “For sure it’s frustrating, disappointing, but we have to move on and learn from it and get better.

“We have to have a good practice Thursday, a great game Friday (against Minnesota) and that’s all we can control right now.”

The Red Wings aren’t exactly charging into the playoffs. They are 6-8 over their last 14 games, and losing a third-period lead to a Montreal team out of the playoff chase could wind up being costly.

“It stings a little bit with how tight things are,” defenseman Mike Green said. “

Former Michigan standout Max Pacioretty scored his second goal of the game at 11 minutes, 18 seconds of the third period, breaking a 3-3 tie.

Pacioretty found himself alone at the side of the net and calmly snapped a shot past goalie Jimmy Howard for his 27th goal.

Howard was pulled in favor of an extra attacker with 2:16 left in the game but the Red Wings, who’ve been successful lately with such advantages, couldn’t pull off any magic this time.

“We just sort of ran out of time there in the end,” Green said. “We were making a push to come back. Sometimes it just takes a lucky bounce and unfortunately we didn’t get it.”

Montreal tied it 3-3 on Sven Andrighetto’s power-play goal at 6:23, a deflected puck past Howard after Luke Glendening took a costly delay of game penalty.

Blashill didn’t like his team defense in the third period.

Montreal had appeared to tie the score early at 2:50 in the third period on Alexei Emelin’s apparent goal.

But video replay confirmed goalie interference by the Canadiens’ Mike Brown on Howard, taking away the Montreal goal.

Howard replaced Petr Mrazek at 11:25 of the first period after Mrazek allowed two goals on seven shots, the third time in his last four starts Mrazek has been pulled.

“I wanted to make the change for momentum at that point,” said Blashill, who wouldn’t commit to a starter for Friday. “I wanted to change momentum.

“He (Howard) did a good job. He made some big saves. But again, I didn’t think we were as tight as we needed to be.”

The Red Wings completely turned the complexion of the game in the second period. With the Wings trailing 2-0, Gustav Nyquist, Anthony Mantha and Mike Green scored power-play goals to give the Red Wings the lead against the undisciplined Canadiens.

They earned the first power play in a fashion they probably would rather avoid.

Larkin returned after a brief stay in the locker room but missed some of the third period because of a cut that required stitches.

Just 44 seconds later, and still on the Emelin penalty, Mantha tied it 2-2 in his first game in his hometown of Montreal.

Mantha pounced on a loose puck to the side of the net during a full-out scramble in front of Montreal goalie Mike Condon and flipped it into the net for his second NHL goal.

“It’s a great feeling but when you lose a game, it doesn’t mean much,” Mantha said.