Detroit — The personnel on the Red Wings’ line rushes at the morning skate Sunday was so topsy-turvy some observers concluded it as all a ruse.

Was Jeff Blashill purposefully skating odd combinations to throw the Lightning off a bit?

As it turned out, it was Blashill’s new order.

One of the series of strategic moves by the rookie NHL coach before Game 3, which helped delivered the first victory in the 2016 playoffs for the Wings, was an entirely unfamiliar combination of forwards charged with the most challenging of duties.

Blashill threw Luke Glendening, Justin Abdelkader and Riley Sheahan at them. The marching orders were to eliminate open ice and play with the puck in the offensive zone as much as possible.

It worked. So well, in fact, a line that combined for seven of the eight Lightning’s goals in the first two games was denied a single shot on net.

Five decades ago, the Wings used a “shadow.” And it had the same effect in the playoffs.

A single player, Bryan Watson, was assigned to follow the Blackhawks great Bobby Hull everywhere he went on the ice. Watson shut down and frustrated Hull, and the Wings of Gordie Howe, Alex Delvecchio, Bill Gadsby and Roger Crozier upset the Blackhawks 4-2 in the series to advance to the Stanley Cup Final, against the Canadiens.

The trio of Red Wings was just as effective Sunday against Johnson, Kucherov and Killorn. But as Glendening explained the morning after, no “shadow” would work against a talented crew of opponents.

The idea of playing Abdelkader, Glendening and Sheahan against Johnson, Killorn and Kucherov came to Blashill and his assistant coaches in a series of conversations that began on Red Bird III as the team plane flew home from Tampa, Fla., late Friday, and continued in some meetings on Saturday, the coach said.

“Just had lots of discussion with our coaching staff on the best way to attack,” Blashill said. “Trying to win a hockey game on Sunday including, certainly, some way of limiting the opportunities the Johnson line was getting.

“So, my focus to the players, those three in particular was, first of all, the best defense is good offense and trying to grind them and make that (Lightning’s) line defend them.

“I don’t want any of our lines to go out and simply try to defend,” he said. “I think it’s too hard. You spend too much time in your end and you’re bound to make a mistake. So, let’s try to make them defend a little bit, too.

“You know, it still comes down to execution no matter who’s out there.”

Abdelkader, Glendening and Sheahan executed, and for 60 minutes.

“We fed off the fans’ energy, right from the start,” Abdelkader said.

“I think it all starts with `Glennie’ who’s done a terrific job last year on that line. He matched them. He makes it really hard. He wins a lot of faceoffs.

“I think me and `Shea’ just filled the void there, along the walls and in the spaces, and made sure we got pucks in,” he said.

“You know, we’re not trying to make too many plays. Just keep it simple. Keep the play in front of us.

“And, I think we’re a line that. Once we get into the offensive zone, we hang on to pucks.”

Sheahan seemed to relish the assignment.

“We all embraced that role,” he said. “With that extra responsibility, I think it just heightens your intensity a bit and make you a little extra aware, out there. So, it was a fun game.”

Tyler Johnson, Alex Killorn and Jon Cooper talk about what the Lightning will need to do in Game 4.

Glendening said it was not a matter of sitting down and watching a lot of film, once the decision was made to match a new line with the Lightning’s big playoff scorers.

“We played them a lot in the last couple of years, here, so not a lot of film,” he said. “But just told to try to play in their zone as much as we can. You’ve got to take away their speed.

“You know, they’ve got a lot of fast guys on their team. But it’s just finishing the checks when you’ve got the opportunity,” Glendening said.

They each said they know they will have to be even better against the Lightning Tuesday, when they expect Tampa Bay to do all it can to seize control of the 2-1 series and send it back to Florida with the Red Wings facing elimination.

“It’s just one game, and we were fortunate to get a win there,” Glendening said. “They’re going to be better tomorrow, and we have to do better as well.” 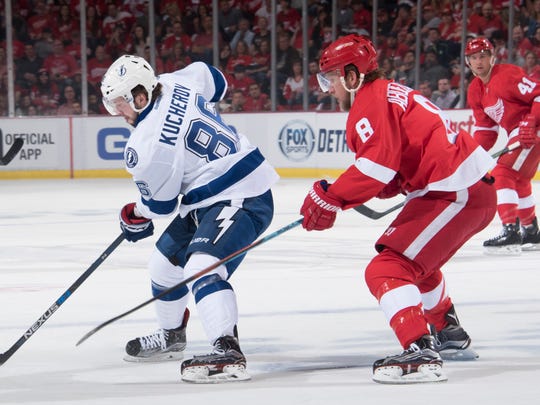 As Sheahan put it, “They’re still ahead in the series, and they’re going to come back the next game, strong.”

Indeed, while Johnson, Killorn and the Lightning Coach Jon Cooper all credited the Wings’ trio with a terrific effort and game, they all said the Lightning contributed by being well off of their best effort.

If they expect Game 4 to produce a different result, Killorn said, “We’ll need to be better.”

For Blashill, reorganizing the forward lines, playing Brendan Smith on defense and switching goalies all confirms a principle of coaching he said he learned long ago: Be not afraid.

Especially, after you make a mistake.

“I learned in coaching a long time ago, you’d better not be afraid to make decision,” he said.

“So, you make decisions and you learn from them. But it can’t hinder you on making decisions in the future.”