The offseason is underway for the Red Wings and there promises to be more intriguing issues than in recent years.

Jimmy Howard -- AGE: 32. CONTRACT: through 2019, $5.291 million per season. COMMENT: Look for him to be traded. But will there be any takers? VERDICT: Likely leaving David Guralnick, Detroit News
Fullscreen

Danny DeKeyser – AGE: 26. CONTRACT: Restricted free agent; COMMENT: One of the building blocks, he will be in for a significant pay raise. VERDICT: Likely staying David Guralnick, Detroit News
Fullscreen

Niklas Kronwall – AGE: 34. CONTRACT: through 2019, $4.75 million: COMMENT: He simply didn’t have a typical season — the offensive production was down sharply, the defensive mistakes were more prevalent. The Red Wings will be hoping for a rebound. VERDICT: Likely staying David Guralnick, Detroit News
Fullscreen

Alexey Marchenko – AGE: 24. CONTRACT: Restricted free agent; COMMENT: Not flashy but does all the right things and has the veteran poise. Marchenko is in the plans, at least for the short-term. VERDICT: Likely staying David Guralnick, Detroit News
Fullscreen

Kyle Quincey – AGE: 30. CONTRACT: Unrestricted free agent. COMMENT: The defense likely will be turned over, with prospects from Grand Rapids, trades and free agents —and Quincey may not have a role. VERDICT: Likely leaving David Guralnick, Detroit News
Fullscreen

Brendan Smith – AGE: 27: CONTRACT: through 2017, $2.75 million : COMMENT: He’s still an unknown — a player who provides a physical presence, plays with an edge, with offensive upside or an inconsistent defender who struggles in coverage? VERDICT: On the bubble. David Guralnick, Detroit News
Fullscreen

Justin Abdelkader – AGE: 29. CONTRACT: through 2023, $4.25 million: COMMENT: Signed a lengthy extension during the season and will be part of the nucleus for a long time. VERDICT: Likely staying David Guralnick, Detroit News
Fullscreen

Andreas Athanasiou – AGE: 21: CONTRACT: through 2017, $933,333. COMMENT: Excited fans with his speed and ability to finish, but needs to round out the rest of his game. VERDICT: Likely staying. David Guralnick, Detroit News
Fullscreen

Pavel Datsyuk – AGE: 37: CONTRACT: through 2017, $7.5 million. COMMENT: Will he stay and fulfill the final year of his contract or return to Russia for family reasons? He is slowing down and isn’t the offensive force he once was. VERDICT: Likely leaving. David Guralnick, Detroit News
Fullscreen

Luke Glendening – AGE: 26: CONTRACT: through 2017, $628,333. COMMENT: Continues to be a key figure on the fourth line with his checking and faceoff ability. Can drive opponents crazy with his non-stop motor. VERDICT: Likely staying David Guralnick, Detroit News
Fullscreen

Tomas Jurco – AGE: 23: CONTRACT: through 2017, $900,000. COMMENT: It was hoped with a new coach and opportunity he would take on a bigger role and earn more playing time. He didn’t. VERDICT: Likely staying Chris O'Meara, Associated Press
Fullscreen

Teemu Pulkkinen – AGE: 24. CONTRACT: Restricted free agent. COMMENT: Failed to win any consistent playing time and fell down the depth chart. He has a booming shot, but needs to work on other aspects of his game. VERDICT: On the bubble David Guralnick / Detroit News
Fullscreen 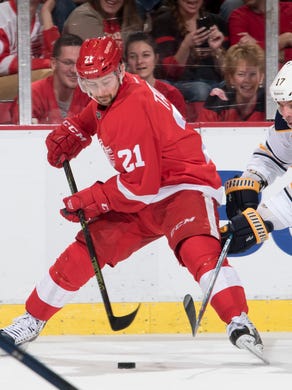 Tomas Tatar – AGE: 25. CONTRACT: through 2017, $2.75 million. COMMENT: Another young player who never really took the next step in his development and offensive production that the Red Wings needed. Consistency has been an issue. VERDICT: Likely staying David Guralnick, Detroit News
Fullscreen

Henrik Zetterberg – AGE: 35. CONTRACT: through 2021, $6.08 million. COMMENT: He started off well, but his production declined as the season wore on. He had an ineffective playoff series. VERDICT: Likely staying. David Guralnick, Detroit News
Fullscreen

Detroit – The offseason is underway for the Red Wings and there promises to be more intriguing issues than in recent years.

The future of veteran Pavel Datsyuk is one such issue. But there are plenty of other question marks on the roster, which needs to be remodeled and strengthened heading into next season.

Here are 10 questions the Red Wings will need answered this summer:

Datsyuk, 37, is thinking about returning to Russia to be closer to his family – or returning to fulfill the final year of his three-year contract, worth $21.5 million. If Datsyuk does depart it would leave the Red Wings with a huge $7.5 million hit in dead salary cap space. They’ll search to trade that cap space to another team desperate to get to the cap bottom but that isn’t easy. Datsyuk is an older, declining player, but the Red Wings still would miss his offensive contributions.

2. Can the Wings land Stamkos?

If Datsyuk were to leave and the Red Wings were fortunate enough to trade his salary cap space, Detroit likely would pursue Steven Stamkos. The Lightning forward is a potential unrestricted free agent who isn’t likely to be re-signed. A 35-goal scorer, Stamkos probably will command around $11 to $12 million per season. The Red Wings would have huge competition for Stamkos, with Toronto, Vancouver, Buffalo and Boston seen as likely bidders.

Petr Mrazek is the goalie for the immediate future, although the way he ended the regular season gives pause. The Red Wings believe Mrazek consistently can be the elite goalie he was in January and February, when he ranked among the league leaders in all key categories. The question is: What do the Wings do with Jimmy Howard? It’s easy to say trade Howard, but finding a team interested in acquiring him and his $5 million-plus salary until 2019 won’t be easy.

4. How will the Wings revamp their defense?

As the season progressed it was clear this wasn’t a position of strength for the Wings. Too many blown coverages and turnovers, poor decision-making. So how will the Wings revamp the defense? Kyle Quincey is an unrestricted free agent and isn’t likely to return. But players like Jonathan Ericsson, Niklas Kronwall and Mike Green have multiple years left on their contracts and will not be traded. Alexey Marchenko and Xavier Ouellet are young players who will get more opportunities next season.

Brendan Smith is a talented defenseman that others teams will value. Same can be said for Tomas Tatar and Gustav Nyquist, two underachieving forwards who might be better off in a new situation. And, of course, there’s Howard, who is still a No. 1-caliber NHL goalie. But it’s a tight market for starting goalies – not many teams are looking for goaltending. Calgary, Buffalo and Toronto might be candidates for Howard.

6. Will the Wings get bigger up front?

Every team wants to get bigger and grittier forwards, and the Red Wings are no different. This roster sorely lacks size, and the Red Wings will once again go searching for it this summer. There are intriguing potential free agents such as Milan Lucic (Los Angeles), David Backes (St. Louis), Troy Brouwer (St. Louis) and Dale Weise (Chicago).

7. Will there be changes in the coaching staff?

Tony Granato is already gone, heading back to his college roots and becoming head coach at Wisconsin. Granato did a lot of positive work with the penalty kill; the unit ranked among the upper half in the NHL the last two seasons. Chris Chelios was considered a candidate to replace Granato, but he already has told the Wings he can’t take a full-time position. Pat Ferschweiler is expected to return but it’ll be interesting to see whether responsibilities will be redistributed after the power play, which he oversaw, struggled so badly.

8. What will the Wings do with their unrestricted free agents?

Kyle Quincey isn’t likely to return, as the Red Wings need to retool their defense, and Quincey could probably earn more elsewhere. Darren Helm remains one of the better defensive forwards and penalty killers in the NHL and the Red Wings would be smart to retain him. But Helm might be able to attract larger, multi-year offers from other teams and out-bid Detroit. Drew Miller is an effective penalty killer but is coming off knee surgery, and with young players on the horizon, Miller might have to look elsewhere. Joakim Andersson and Brad Richards aren’t likely to return. One hiccup to the Red Wings’ financial structure: restricted free agents Danny DeKeyser and Petr Mrazek will get huge pay raises.

If Pavel Datsyuk leaves and the Red Wings are able to trade his salary cap space, it would free $7.5 million. That would immediately put them in the market for forward Steven Stamkos, the best free agent on the market. Power forwards Milan Lucic and David Backes would be positive additions, but they will attract plenty of bidders. The Wings also need defense, but there’s no true No. 1 type of defenseman on the market.

10. Are there any prospects who can help?

Forward Andreas Athanasiou and defenseman Alexey Marchenko moved into the lineup the second half of the season and will have larger roles next season. Forward Anthony Mantha earned a taste of the NHL in March, showed good offensive instincts, but needs to get stronger physically and is raw defensively. Defenseman Xavier Ouellet will be out of minor-league options next season and a decision on his future will be made. Forwards Tyler Bertuzzi and Tomas Nosek, and defenseman Robbie Russo, are likely another year away.