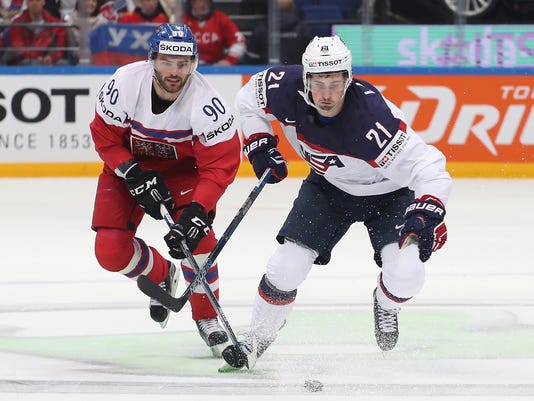 Dylan Larkin chases down the puck during the Americans' win over the Czech Republic on Thursday.(Photo: Anna Sergeeva, Getty Images)

Moscow — Auston Matthews scored one goal in regulation and one after it Thursday to give the United States a spot in the semifinals of the hockey world championship with a 2-1 shootout win over the Czech Republic.

Loaded with young talent, the Americans, including Red Wing Dylan Larkin, came into the game as underdogs after losing four times in the round-robin stage. But they managed to eliminate an experienced Czech team that had won its preliminary round group.

Matthews, still only 18, scored in the second period to tie the game and later scored the only goal in the shootout, sliding the puck between Czech goaltender Dominik Furch’s legs.

“I just wanted to open his legs, go five-hole,” Matthews said. “I was able to sneak it in there, so it worked out.”

Matthews is expected to be the No. 1 pick in next month’s NHL draft.

“He almost presses too hard sometimes, you know. I talked to him, I said ‘You know, your moment’s going to come,’ and sure enough it comes in the shootout,” teammate Nick Foligno said. “He’s just young and he’s learning but he’s got all the tools and all the talent.”

Tomas Zohorna gave the Czechs the lead with a penalty shot after Patrick Maroon was penalized for hooking Zohorna on a U.S. power play.

The U.S. was outshot 29-20 in regulation, including 8-2 in the first, but piled on the pressure in 10 minutes of four-on-four overtime, forcing Furch to make seven saves, including a stick save on a shot from Chris Wideman.

The United States will play Canada or Sweden in Saturday’s semifinals.

Finland also secured a place in the semifinals with a 5-1 win over Denmark. The Finns will next play Russia or Germany.