Red Wings have to adjust to life without Datsyuk

Red Wings have to adjust to life without Datsyuk 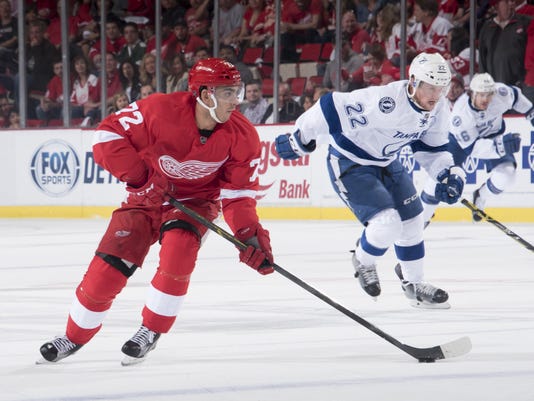 As the Red Wings begin training camp Friday, they do so with a revamped roster caused somewhat by the loss of Pavel Datsyuk, who retired and returned to Russia.

To offset his loss, general manager Ken Holland signed free-agent forwards Frans Nielsen and Thomas Vanek, who along with scrappy forward Steve Ott, give the Red Wings a new look.

“There’s been some big acquisitions,” said defenseman Niklas Kronwall, who along with captain Henrik Zetterberg will not participate in camp because of knee injuries. “The guys that have come in, like Nielsen, he’s one of the most underrated guys in the league, an extremely smart player.

“Vanek ... we’ve all seen him over the years, what he did in Buffalo and on the Island (Islanders). Hopefully he can find his (offensive) touch again and just kind of get back to himself.”

Still, it will be strange not seeing Datsyuk on the ice.

One of the best two-way players in the NHL, Datsyuk’s absence forces the Red Wings to adapt and individually take on larger roles.

“Losing Pav, that’s going to put some extra pressure on a few of the other guys,” said forward Darren Helm, who re-signed with the Red Wings and bypassed unrestricted free agency.. “That’s one thing Kenny (Holland) said as well, Pav is gone so there’s spots for guys to step up and there are a few guys looking to fill that role or fill those extra minutes.”

Then, there’s the young players who gained experience last season — Dylan Larkin, Andreas Athanasiou and Anthony Mantha, among others — who could ignite what was largely an inconsistent offense.

The goal, however, is to lighten the load of some key veterans — Zetterberg and Kronwall, namely.

“We want to see the younger guys take steps and kind of take minutes from the older guys,” Zetterberg said. “But I won’t give it away, they have to earn it. That’s part of the transition.”