Rochester native Jacob Trouba – who starred at Michigan – told the Winnipeg Jets over the weekend he wants out.

The players catch their breath after participating in a skating test. David Guralnick, Detroit News
Fullscreen

Center Dylan Larkin and the rest of his teammates rest after participating in a skating test. David Guralnick, Detroit News
Fullscreen

Defenseman Brendan Smith, left, keeps the puck away from the other players during practice. David Guralnick, Detroit News
Fullscreen

The players catch their breath after participating in a skating test. David Guralnick, Detroit News
Fullscreen 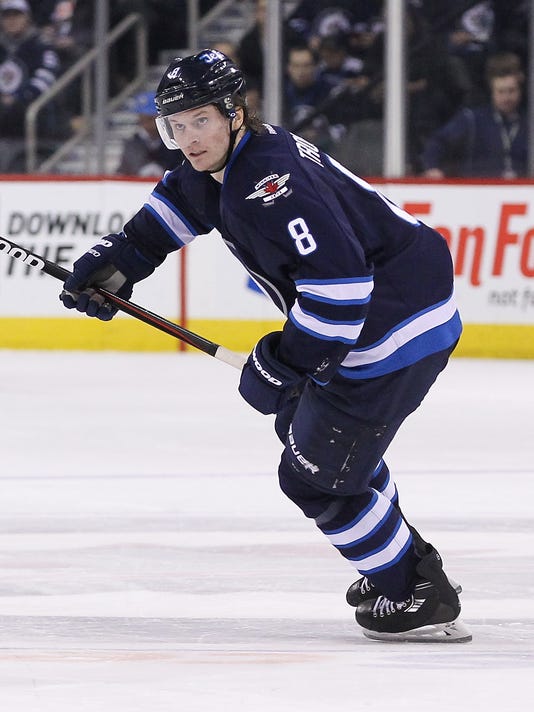 Traverse City – The Red Wings continue to search for a defenseman, preferably one with a right-handed shot and who has his best hockey is ahead of him.

One appears to be on the market.

Rochester native Jacob Trouba – who starred at Michigan – told the Winnipeg Jets over the weekend he wants out.

Trouba, 22, a restricted free agent, thinks he’s been crowded out on the Jets, who already have Dustin Byfuglien and Tyler Myers on defense.

“Our client, Jacob Trouba, will not be attending the Winnipeg Jets NHL training camp,” said Kurt Overhardt, Trouba’s agent, in a statement. “Since May, we have been working with the Jets management in an effort to facilitate a trade of Jacob’s rights. Both parties continue to work on this matter.

“Our client has nothing but respect for the people and City of Winnipeg, the Winnipeg Jets, its fans, management and ownership – our desire to get him moved has everything to do with opportunity. We will continue to work with the Jets in good faith to achieve this end.”

The Red Wings would relish a 6-foot-3, 200-pound all-around defenseman who had six goals and 21 points, along with 62 penalty minutes while playing over 20 minutes per game.

But finding players or prospects the Jets could be interested in, along with the Red Wings being right near the salary cap currently, will present problems.

Arizona and Edmonton, two teams with a load of young talent and cap space, and possibly Boston, which is desperately in need of a defenseman, could be the early leaders on acquiring Trouba.

Drew Miller is using last season as motivation coming into this preseason.

Miller had jaw surgery, then injured his knee shortly after returning to the lineup, which required season-ending surgery.

Miller signed a one-year contract in the summer, though he knew the team had forward depth.

“Every year you come into camp that’s the discussion; I don’t think that’s changed from the first time I was here,” Miller said. “There’s always competition, and you’re fighting for your spot. That doesn’t change. I have to prove myself and show my knee is ready to go.

“It was a tough season and definitely didn’t go the way I wanted to go. But it gives you motivation and I got myself ready and worked hard this summer and ready to go.”

Coach Jeff Blashill is glad to have Miller back.

“From a defensive standpoint, penalty-killing standpoint, it’s real important,” Blashill said. “He’s one of those players that is able to play real well with the role he gets. He kind of wants that role.”

The Red Wings will conclude training camp with Monday’s annual Red and White scrimmage, return to Detroit afterward, and play the Pittsburgh Penguins Tuesday at Joe Louis Arena in the first exhibition game.

… Blashill said he’ll toy with various lines the first few exhibition games, while players returning from the World Cup of Hockey continue to trickle back.

One line Blashill could use this week, after using it in Traverse City scrimmages, is Dylan Larkin centering Andreas Athanasiou and Anthony Mantha.