The Detroit Red Wings knew they were getting a versatile player when they signed Steve Ott last summer. 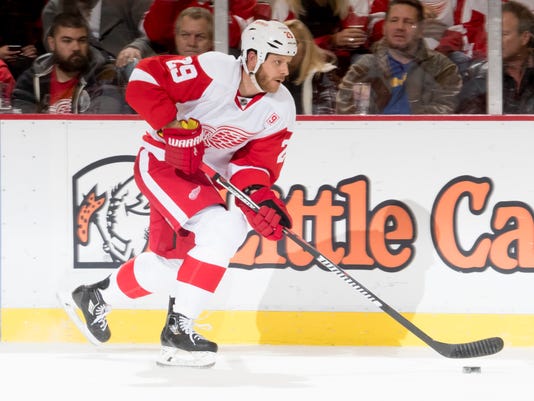 Detroit – The Detroit Red Wings knew they were getting a versatile player when they signed Steve Ott last summer.

Ott is viewed by many fans as somewhat one-dimensional – an agitating, physical player who likes to stir opponents into distraction.

But Ott has proven to be as advertised, capable of filling in several roles, including at Thursday’s practice centering the fourth line, which he’ll likely do Friday at Washington.

The move was necessary because of Darren Helm’s injury (dislocated shoulder), which will force Helm to miss at least six weeks.

“Steve has played a lot of center in his career, he played it all the way through the playoffs two years ago in St. Louis,” coach Jeff Blashill said. “He’s really comfortable there and it gives us another option.”

Ott was centering Tyler Bertuzzi – who was recalled from Grand Rapids to fill Helm’s roster spot – and Drew Miller at Thursday’s practice.

“He’s (Ott) exactly what Hitch said he was – he’s an accountable player, good defensively so you can trust him, he brings a physicality and irritation that’s been well documented, but he’s also strong on the puck and he brings energy to your locker room,” Blashill said. “He’s been all those things.” Ott was comfortable slipping back into the center position Thursday, where he admits he might curb some of his fierce style.

“Probably don’t run around as much or look for big hits,” Ott said. “I’d rather be more of a reliable centerman, being in the right position for my teammates, and when opportunities are there you can take it (the big hit), but you have to be smart, as well.”

Similar to last season, the Washington Capitals are again beginning to separate themselves as one of the elite teams in the NHL, thanks to a deep, balanced lineup.

And, as usual with Washington, the success begins with forward Alex Ovechkin, who is among the league leaders with eight goals and 66 shots.

“He’s such a big body and he’s not as physical as he once was, but he’s still physical and he has that big shot,” Blashill said. “You see guys in the league who are real fast or who might have that shot but are thinner bodies and not necessarily as physical.

“He’s one of those guys you don’t want to wake him up, not because he’s not ready to play, but sometimes when you get physical with him he turns up his game another notch.”

Jimmy Howard, who’ll get the start against Washington, views Ovechkin as the type of player goaltenders always have to be aware of on the ice.

“You know he’s going to be a shoot-first type of player,” Howard said. “It’s just a game within a game type of thing, and 95 percent of the time, when he has the puck, it’s coming at you and you have to be ready. He’ll let it go from anywhere.

Niklas Kronwall was skating with Ryan Sproul Thursday, meaning Kronwall likely would return to the lineup and Sproul would be staying in after his two-point game against Tampa.

The odd defenseman out? Judging from practice lineups, it’ll be Brendan Smith, who was skating with Xavier Ouellet, who was a healthy scratch against the Lightning.

… Bertuzzi scored a goal Wednesday in Grand Rapids’ victory, then was told to drive back to Detroit, after being sent down earlier in the week.

“I felt good out there, gained some confidence, and I’ll try to bring it up here,” Bertuzzi said. “It’s been pretty hectic but it’s all worth it.”

Outlook: The Capitals are 7-2-1 over their last 10 games, and are coming off a big victory over Pittsburgh. … C Nicklas Backstrom (11 assists) and LW Alex Ovechkin (eight goals) form a dangerous offensive duo.