With Tomas Jurco back in the lineup, Detroit skates past Dallas, 3-1, Tuesday at Joe Louis Arena.

The two teams mix it up during a second period scrum. David Guralnick, Detroit News
Fullscreen 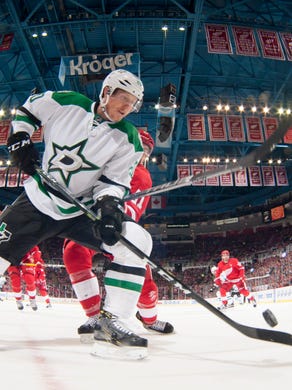 Riley Sheahan – Sheahan averages over 14 minutes a game, has received time on the power play, played on scoring lines. And in 38 games, Sheahan has yet to score a goal while also posting a minus-14 plus-minus rating. The season thus far, has been a fail. GRADE: F David Guralnick, Detroit News
Fullscreen 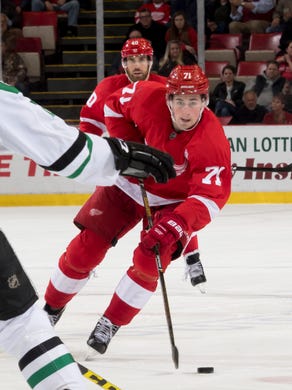 Dallas right wing Patrick Eaves skates away as the Red Wings celebrate their victory at the end of the game. David Guralnick, Detroit News
Fullscreen

Detroit — The credit for this Red Wings victory?

All you need to do is point to the special teams and goaltender Petr Mrazek.

That combination was crucial Tuesday in the 3-1 victory over the Dallas Stars.

Mrazek stopped 34 shots including 17 in the third period with the desperate Stars pressing.

As for the special teams? The Red Wings scored two power plays goals from Dylan Larkin and Anthony Mantha to take the lead  — Steve Ott added the empty netter — and they killed all five Stars power plays including a 46-second two-man advantage in the third period.

It all added up to the Red Wings’ (11-10-2, 24 points) third victory in four games and they’ve earned points in all four (overtime loss to Canadiens, the only defeat).

“Our goalie was real good and we’ve said you have to win games with the special teams lots in this league,” coach Jeff Blashill said. “You need to be able to do that to win hockey games and we haven’t done it enough this year, where special teams have won us games.

“Our penalty kill has been coming for a while, our process has been real good. I liked a lot of what I saw on the power play. Hopefully we can continue to make strides forward.”

Mrazek was at his best in the third period, as he continues to find rhythm and consistency while replacing Jimmy Howard (groin injury).

“Mrazek played unreal,” said Mantha, who scored his third goal since being promoted from Grand Rapids.

“When he’s on his game, his competition level is excellent,” Blashill said. “He doesn’t budge at all in net. They drove the net hard and obviously it ended up with a couple of scuffles around the net, but he stands his ground great.

“That’s one of his strengths. He really competed well tonight.”

Said Mrazek: “They were coming hard to the net in the third period. They were trying to throw everything at the net. I was just trying to be strong at the post.”

Mantha broke a 1-1 tie on the power play at 7:56 of the second period. He converted a nicely executed 2-on-1 with Henrik Zetterberg, as Mantha used his long reach to shovel the puck into a vacant side of the net.

“We’re finding some chemistry,” said Zetterberg, who had his 12th assist. “We’ve been sticking to the same lines a little bit and it’s nice to get something going.”

Blashill feels the work Mantha put in over the summer in terms of strength has proven to be beneficial at the NHL level.

But Mantha is also capitalizing on his second visit to the NHL.

“He’s getting a good opportunity and he’s making the most of it,” Blashill said. “He’s been a real good NHL player since he’s been up here.”

The start of Tuesday’s game was certainly not the way the Red Wings had it drawn.

The crowd was buzzing from the introduction of Ted Lindsay, a 91-year-old legend who dropped the ceremonial puck on his replica statue night. But the energy quickly disappeared when Stars defenseman Esa Lindell scored just 16 seconds into the game.

Mrazek stopped a shot by Tyler Seguin, but the puck got to Lindell near the faceoff dot. Lindell's shot bounced off the skate of Wings defenseman Mike Green and redirected high over Mrazek, putting the Red Wings in a quick hole.

“It’s a 60 minute game and sometimes it happens,” Blashill said. “It was a little bit unfortunate, good for them to go to the net and throw the puck at the net and it goes off Greener’s skate and goes top shelf.

“But that’s the way it goes sometimes and at that point, let’s keep going.”

Larkin tied the game with just 19 seconds left in the first period.

With Stars defenseman Stephen Johns off for interference at 19:16, the Red Wings quickly converted.

Green found Larkin near the high slot and Larkin unleashed a shot that bounced off the skate of Dallas defenseman Jordie Benn and slid by goalie Kari Lehtonen — who was screened by Thomas Vanek — for Larkin’s seventh goal.