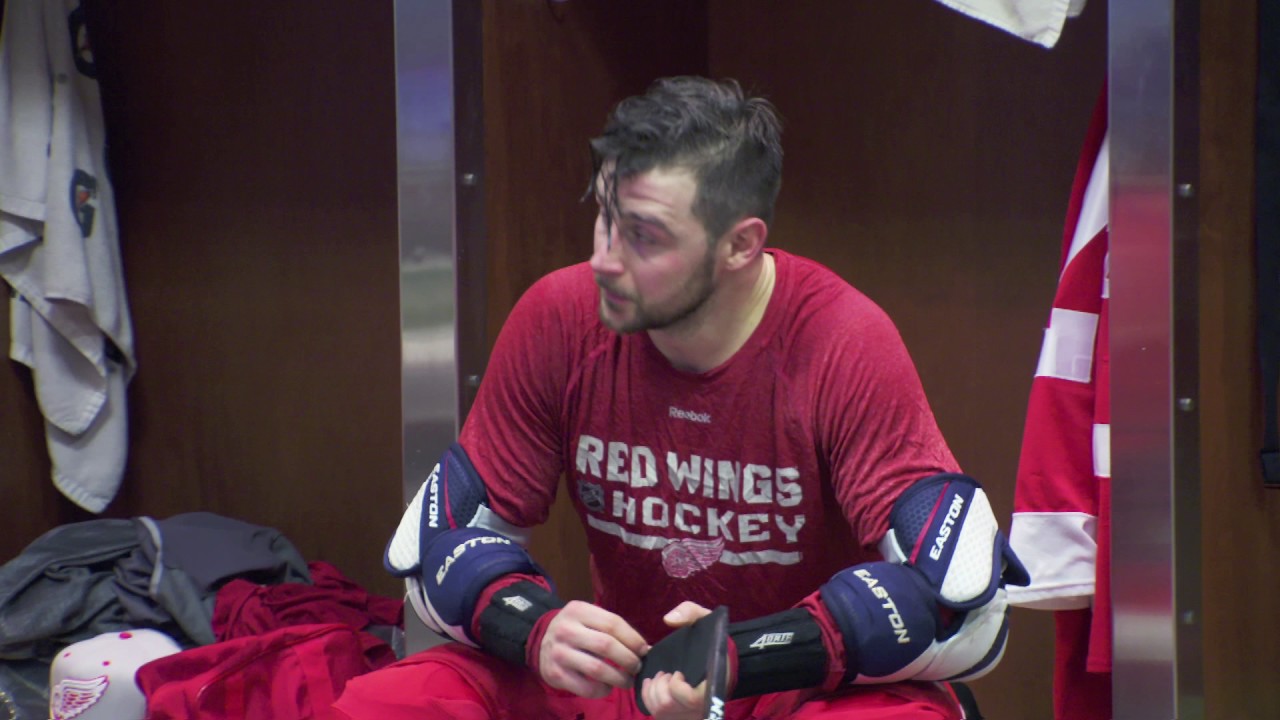 Detroit — Henrik Zetterberg is another in a line of discreet Red Wings captains.

Like Steve Yzerman, next to whom he sat early in his career, in his early seasons, and Nicklas Lidstrom, Zetterberg leads by doing, the dedication he shows on and off the ice, during games, in practices, the weight room and how he prepares himself for games and seasons.

When he speaks, it is notable.

It is not about rah-rah. It is done with much the same voice and appearance fans hear and see on TV.

Most of his candid, difficult moments with his teammates are away from the media. But this week, the videographers of EPIX, in partnership with the NHL, recorded some recently for EPIX Presents Road To the NHL Outdoor Classics, which debuted Friday.

Their cameras were candid.

After the dispirited and dispiriting, 4-1 loss to the Coyotes Tuesday, as he passed the open double doors separating the players’ room from a hallway to the ice and coaches’ rooms, Zetterberg flung his still gloved hands behind him, grabbed both long vertical handles and swept the doors shut.

They are not the kind of doors that slam.

But they closed with considerable, abrupt haste.

His teammates mostly sat on the stools before their stalls, or stood. Some were undressing. Some were clearly mulling the loss.

Zetterberg may have been as upset as he allows himself to be.

He did not yell, but he was direct and unsparing. And his cadence was clipped.

Then, he paused and set his bearded face in a grimace.

“And if that’s the effort?” he asked, rhetorically.

“It’s the battles. It’s got nothing to do with passing, or speed and passing.

“It’s just heart,” Zetterberg said, sweeping his right hand into his chest and tapping it. “We have to go out and play better!

“If we played good today and we lost, then fine. There’s one way!

“Look, let’s stay together. You can’t start complaining and pointing two fingers at anyone, everyone.

“It starts the next game, here. We’ve got to win that one. The next one. Let’s start with one game, a 60-minute effort.”

Two days later, on Thursday, they would lose to the Kings, 4-1.

Tyler Bertuzzi is feeling better,  is skating again after his and his expected three-to-five week recovery from  high ankle sprain he suffered against the Canadiens Nov. 26

But eventually he will need to skate do it with the team, practice and get back into something approaching game shape before he plays.

“I feel good,” said the 21 year-old forward who has no points in seven games. “You know, I’ve done a couple of skates and just easing back into it.”

Bertuzzi will travel with the team, as it begins a stretch of 10 games out of 11 on the road Monday in Carolina against the Hurricanes.

“Just because I’m skating,” Bertuzzi said, about his recent mobility. “And I think we all think it’s better to get some more ice time in and some treatment.

Bertuzzi said he may skate with the team around Christmas.

“Just keep moving forward,” he said.
The conditioning will be a big part of his comeback, given a month off the ice, he said.

“Got to work hard on an off the ice,” Bertuzzi said.

The Red Wings, in truth, have seemed a little tightly wound on the home stand, with Jeff Blashill commenting they might have been too tight against the Blue Jackets, rather than lackluster, and Zetterberg mentioning at another juncture that perhaps a bit of nerves had bitten them.

So, perhaps keeping it loose is becoming a priority.

With a couple of broadcast cameras and several phone cameras pointed at him, Bertuzzi was the very vision of self-control during his session in a scrum of media — despite someone else’s best effort.

Behind the half-circle of folks facing Bertuzzi, Andreas Athanasiou tried faces, gestures and the good ol’ reliable silent belly-laugh to provoke some laughter, a smile, perhaps a grin, even, from his Red Wings and Griffins teammate.

While the video cameras ran, Athanasiou could not get even a facial muscle to twitch.

Congratulated by the media for his serious deportment, Bertuzzi was nonchalant.