Nikita Kucherov scored at 3:28 of overtime, giving Tampa a 2-1 overtime victory over the Red Wings on Friday.

The two teams mix it up during a first-period scrum. David Guralnick, Detroit News
Fullscreen 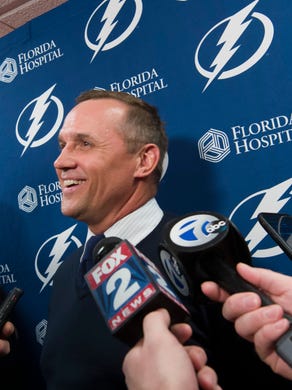 Detroit goalie Petr Mrazek comes way out of the net to keep the puck away from Tampa Bay center Brayden Point in the overtime period. David Guralnick, Detroit News
Fullscreen

Detroit — These sure aren’t the Tampa Bay Lightning that fans have been used to in recent years — but they still find ways to defeat the Red Wings.

Nikita Kucherov scored at 3:28 of overtime to give Tampa a 2-1 overtime victory over the Red Wings Friday night.

It was Tampa’s sixth consecutive win over the Red Wings, and fourth this season.

“Our start wasn’t good enough,” Wings coach Jeff Blashill said. “We’ve talked lots about making sure that we’re ultra competitive, that our second and third efforts on pucks is real good and we didn’t come out, we weren’t crisp.

“Our compete wasn’t good enough. It picked up in the second and third periods.”

The Red Wings had opportunities thanks to five power plays, but a unit that’s been better recently never got going.

“We had five chances, a chance to win the game, that’s the difference in the game,” Blashill said. “Our penalty kill was good but the one power play in the second we didn’t get in the zone, that was no good at all.

“Overall it had its moments but not good enough. We just have to make sure that we’re doing a better job on our entries, we need more speed on our entries.”

These teams have met in the first-round of the Eastern Conference playoffs the last two seasons — the Lightning won both — but that isn’t happening this season.

The Red Wings’ struggles are well documented, while Tampa (36-29-9) has been struck with injuries to stars such as Steven Stamkos (knee), inconsistency, and the gutting of its roster at the trade deadline, and missing the playoffs has become a distinct possibility.

But the Lightning are hanging around with a young lineup, and their playoff chances got a lift with this win.

What bothered the Red Wings was that they didn't jump on Tampa early, as the Lightning played in Boston the night before.

“We came out with a slow start, and that’s not good enough, especially a team playing back-to-back,” Justin Abdelkader said. “We got better as the game went on but it was unfortunate we couldn’t get a power-play goal.

“That could have been the difference in the game.”

Tampa’s Ondrej Palat tied the score at 1 in the third period.

Kucherov took a slap shot from the high slot that Mrazek gloved — but the puck dropped to the ice.

Palat, skating through the crease, gathered the puck and gently tapped it past Mrazek for his 15th goal at 5:53.

Zetterberg scored his 16th goal — and 325th of his career, passing Norm Ullman for sole possesion of sixth place in Red Wings history.

It wasn’t the prettiest goal Zetterberg has scored among the 325 but he and the Red Wings will gladly accept it nonetheless.

Gustav Nyquist skated into the zone and backhanded a pass to Zetterberg skating down the slot.

Zetterberg snapped a shot, a knuckleball almost directly off the stick, and the puck appeared to glance off forward Brayden Point and flutter over the shoulder of goalie Andrei Vasilevskiy, who never appeared to get a good look at it.

This was a physical game with Anthony Mantha and Andreas Athanasiou getting into fights.

“There’s definitely been a little bit of a rivalry building with these guys, even from last year’s playoffs,” Athanasiou said.