Rusmussen will be among 26 players who will take part in the annual tournament in Traverse City Sept. 8-12.

The Red Wings released their 2017 NHL Prospect Tournament roster, a group of 26 recent draft picks, free-agent signees and tryout players who will compete against seven other NHL prospect teams for the Matthew Wuest Memorial Cup from Friday, Sept. 8 through Tuesday, Sept. 12 at Centre Ice Arena in Traverse City.

First-round pick center Michael Rasmussen, a 6-foot-6 forward who had 32 goals in 50 games for the Tri-City Americans of the Western Hockey League, highlights the roster. He'll be joined by defenseman Dennis Cholowski (20th overall, 2016), who turned professional following his freshman campaign at St. Cloud State University and served as a Black Ace during the Grand Rapids Griffins’ Calder Cup championship run.

Right wing Evgeny Svechnikov, who was selected 19th overall in 2015 and played on the Griffins' Calder Cup team last season, will also attend the camp.

Tickets are available for $10 per day and can be purchased at Centre Ice Arena or at www.centreice.org.

Each ticket is good for all four games per day.

Teams are divided into two divisions and will play each team within their division once during the round-robin before a crossover on the final day of the tournament, with the first-place finishers in each division meeting for the championship on Tuesday, Sept. 12. 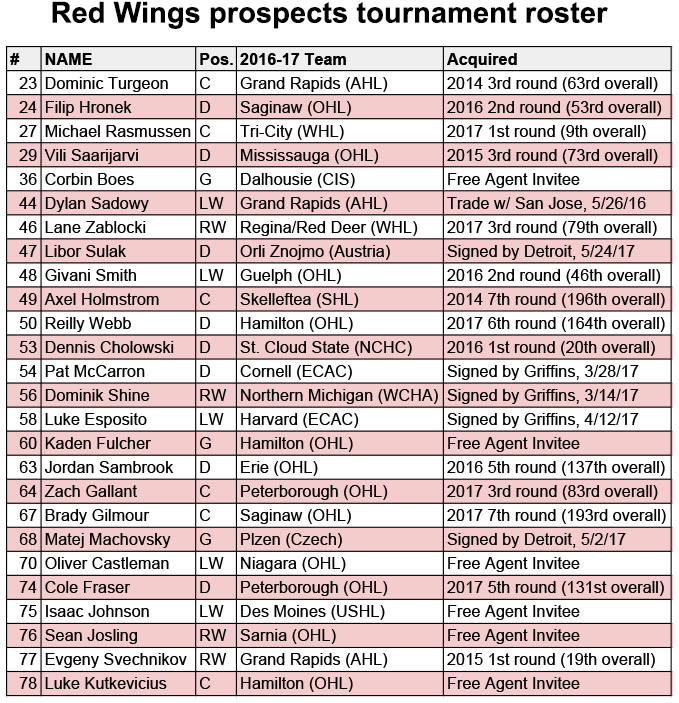