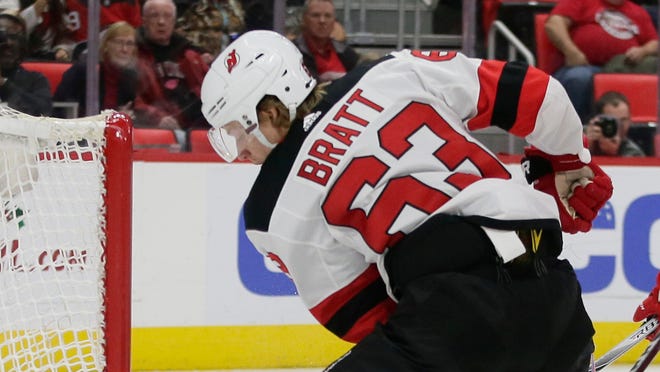 Detroit — The Red Wings fought back from a two-goal deficit with about 14 minutes left in regulation against the much-improved New Jersey Devils on Saturday, only to lose a fourth consecutive game, and run their record in overtime to 0-4 so far this season.

Brian Gibbons beat Jimmy Howard from point-blank range in overtime,to give the Devils the 4-3 victory.

David Booth, the 33-year-old native of Detroit, who played 134 games for Michigan State from 2002-06, and whose hockey career is a model of persistence, had a night to remember in a career long marked by his fortitude.

After entering the lineup due to an injury to defenseman Trevor Daley, Booth opened the scoring at 34 seconds of the first period. His deft tip of a long attempt deflected the puck into the New Jersey net, to give the Red Wings a quick start.

Then, at 8:16 of the third period, he banged in a pass from Henrik Zetterberg to tie the score.

“It was really cool just to come out here and help contribute tonight, you know, being in and out of the lineup,” said Booth, who grew up in Washington Township and has bounced around both the NHL and the Kontinental Hockey League in Russia in recent seasons, before the Wings offered him a tryout, this season.

“I just really enjoy just being here and going to the rink every day, and being really grateful for this opportunity to play for the Detroit Red Wings.”

Booth finished with two goals — his first of the season and as a Red Wing — five shots on goal — tied with Darren Helm for most on the team — and a hit.

After he opened the scoring and provided considerable offensive presence, suddenly playing on a line with Henrik Zetterberg and Gustav Nyquist, nominally the Red Wings top line, despite frequent shuffling, the fans in Little Caesars Arena warmed to Booth’s effort.

As he sat on the bench, his image suddenly popped up on the huge screen over center ice, and the fans, in unison, hollered, “Bo-o-o-o-o-o-oth!”

“It was unbelievable,” Booth said. “It really was.

“You know, our family has had season tickets for 30 years, and watched from the front row when they won the Stanley Cup. So, this goes back. It brings back very good memories.”

But the memory of Saturday would have glimmered all the more had the Wings won.

Once again, they played well enough to emerge victorious. But, as has happened several times this season, the Red Wings’ better efforts are sometimes not good enough to beat competitors playing well.

In front of their backup goalie, Keith Kincaid, appearing in only his eight game of the season, and beginning the night with a gaudy 3.08 goals against average, the young Devils managed to prevail. New Jersey has eight players 23 years old or younger, as GM Ray Shero and head coach John Hynes preside over a significant restructuring of the roster, since last season alone.

After Booth opened the scoring, the Devils got goals from Brian Boyle, at even strength at 9:12 of the first, Taylor Hall on the power play at 13:21 of the first and Nico Hischier at 6:12 of the third period.

Boyle now has three goals in 13 games, after spending much of the season in treatment for a form of leukemia.

Hall’s eighth goal of the season came from the slot, as he skated in on the Wings’ starting goalie Petr Mrazek and blistered a wrist shot from point-blank range.

Hischier, 18, scored his fourth of the season to go with 13 assists in 23 games.

The Red Wings found themselves down by two with less than 14 minutes remaining.

But they found their way back to tie it, with goals by Anthony Mantha, his 11th of the season, and Booth’s second. Regulation time ended with the score 3-3.

After they were outshot 12-7 in the first period, the Red Wings outshot the Devils 27-17 in the last two periods.

“I thought the second and third, overall, we were real good,” Wings coach Jeff Blashill said. “I like the way we battled back. We showed a lot of composure to stick with it, there.

“I thought we pushed real hard. We proved to ourselves we can be a real good hockey team against a lot of good teams. “We’ve got to find a way to win it.”

Zetterberg’s assist moved him past Pavel Datsyuk with 919 career points for the Red Wings. He is now alone in sixth for all-time career scoring for the club, behind Gordie Howe (1809), Steve Yzerman (1755), Alex Delvecchio (1281) Nicklas Lidstrom (1142) and Sergei Fedorov (954).

Trevor Daley sat out the game after apparently aggravating a stinger he suffered in the game Friday against the Rangers.

The Wings removed Mrazek in the third period after he yielded the third Devils goal.

However, Mrazek fell hard to the ice moments earlier when Adam Henrique ran the crease on what would be a disallowed goal, and the goalie, in his first start in seven games since Nov. 9, reportedly left the game for a concussion protocol.

After the game, Mrazek said he had felt no head pain, but had “a little difficulty breathing.”