The organist, Lance Luce, gets more than consideration at Little Caesars Arena.

During some games, Luce is a lot better received than the Red Wings.

And no one would have been more pleased with the organ as a focal point than Mike Ilitch, the late owner of the team.

After years with no organ at Joe Louis Arena, and recalling its sound in Olympia where he and his wife Marian held season tickets, Ilitch wanted to re-establish the tradition.

Like much about Little Caesars Arena, this “theater organ” from the Allen Organ Company in Allentown, Pennsylvania, is not just any organ.

“He was the motivating, driving force behind getting the organ and he wanted it to be substantial. He didn’t want to just put in a little dinky organ. He wanted to make a statement.

“That’s why it’s in the red and white colors, it’s going to have the logo and its right out here in full view,” he said.

The organ is one of 25 in the 31 NHL arenas, but one of only five theater organs. The rest are church or home organs hooked up to big arena sound systems.

“That particular model, the STR-4, there’s probably less than a dozen of them worldwide,” said Aram Basmadjian, a vice-president at the Allen Organ Company, a 79 year-old manufacturer. “That’s a very custom, very specialized instrument.

“The theatre organ market is a very specialized subset of the overall organ market. There’s not a large number of them around,” Basmadjian said. “Our company is maybe one of only a couple of companies that are building theatre organs today.

“It’s a very small number that are built in a given year.” 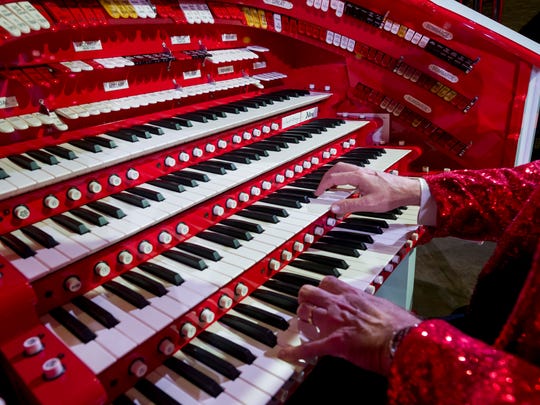 Lance Luce plays the organ in the top level of Little Caesars Arena before the start of a Red Wings game. (Photo: David Guralnick, Detroit News)

Until the 1930s, movie theaters often featured large pipe organs, often Bartons, like the original, grand pipe organ in the Olympia, or Wurlitzers. A smaller, less expensive Hammond organ emerged, producing an inferior sound, many would argue, for a fraction of the price.

Allen Organ, through some of its 14 patents, eventually perfected the process of digital replication of sample pipe organ sounds to create the modern theater organ.

“Of course, the most famous old pipe organ was the really big one in the old Chicago Stadium,” Luce said. “It was the granddaddy of them all. It had six keyboards. All of the pipes were in the scoreboard.

“When the Hammond organ came out, a lot of the theaters and the ballparks and arenas and so forth went with the Hammond organ, because it is so much less expensive. You could put a bunch of speakers around, and you had the sound of this Hammond organ. And that was very popular.

“But what we’ve got is really a throwback back to the theater organ days.

“So, I’m a one-man band. I’ve got glockenspiels, xylophones and bass drums and fiddles and cymbals and sirens.

“I’ve got literally all the bells and the whistles,” Luce said.

“I’ve got literally all the bells and the whistles,” Lance Luce says about the Little Caesars Arena organ. (Photo: David Guralnick, Detroit News)

Luce has been a church organist for 42 years, including currently at Cross of Christ Lutheran Church, in Bloomfield Hills. He also is part of a group of organists that supports the Redford Theatre and its organ. Like most musicians, he said, he works multiple jobs, including as an organ salesman for 26 years.

Working at Evola Music, Luce sold the organ to the Red Wings. They asked for an early delivery of another organ, while Allen Organ put the finishing touches on the permanent instrument.

“And I said, sure. For what?” he said. “And they said for auditions. And I said auditions for what?

“And so I auditioned and I got the job.”

After learning to play guitar in the Grinnell’s store in Macomb Mall, and saxophone and cello in the Warren Consolidated schools, Luce got hooked on the organs he saw on display at the store.

“I saw the guy come up out of the orchestra pit on the lift, on the Barton organ, and I went, oh, man! I want to do that!

“That’s where it started.”

“I am feeling that it’s being very well received,” he said.

“Of course, part of it is they have that great screen. They’ve got all the great technical facilities, the cameras and the lighting and stuff. Because in the old days when you didn’t have that, I’m just a little speck in the distance, right? Now, they’ve got all these little cameras that can zoom in.

“And, of course, it’s going through their $2 million sound system. So, it can sound fantastic, without having to have the pipes.”

The organ is not quite finished. Presently, Red Wings and Hockeytown logos will be affixed to its shimmering, high-gloss finish, along with the list of years in which the Red Wings have won the Stanley Cup.

“When I got this job I got on YouTube and I went out to see what other guys are doing around the country, and they’ve got Hammond organs or Lowery organs and it’s not quite as nice as what we’ve got,” Luce said.

“But there’s also some guys playing keyboards, and they’ll say we’ve got Bob on the keyboards. And I look and he’s playing a single keyboard with no bass pedals for his feet. So, it’s not really and organ.

“If you’re not playing bass pedals with your feet, it’s not really an organ.”