Ex-Wing Mrazek on trade to Flyers: ‘I was ready for it’

Ex-Wing Mrazek on trade to Flyers: ‘I was ready for it’

Former Red Wings goalie Petr Mrazek said he was ready for a trade to the Philadelphia Flyers. 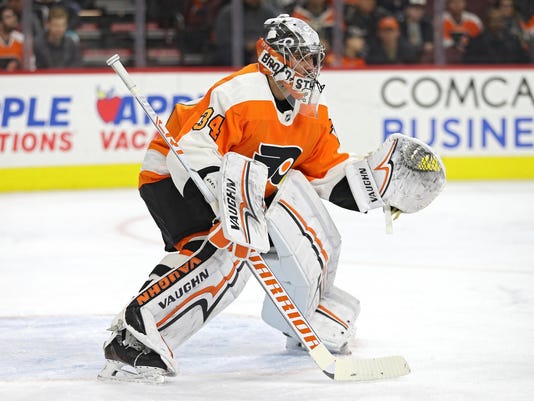 Former Red Wings goaltender Petr Mrazek is 5-5-1 in 11 games with the Flyers, with a .3.14 goals-against average and a .901 save percentage.(Photo: Patrick Smith / Getty Images)

If anything, Mrazek was relieved and looking forward on the next chapter in his career.

“I was ready for it,” said Mrazek after Tuesday’s morning skate, wearing the orange and black colors of the Philadelphia Flyers, where Mrazek was traded Feb. 19 for two conditional draft picks. “I was really excited for it.”

Mrazek, 26, appeared on the verge of stardom two seasons ago with the Red Wings, but a late-season slump in 2016 carried into last season, and then this season, with Jimmy Howard outplaying Mrazek, who was relegated to back-up status.

With the Flyers in desperate need of goaltending with both of their goalies injured, the opportunity to come to a new organization and prove himself excited Mrazek.

As was the chance to play fairly regularly.

“I was really ready for it for a little while,” Mrazek said of a potential trade. “I didn’t play much the first half of the year. Howie played real well the beginning of the year and there wasn’t (much chance) for me to go in.

“After the New Year, I played a lot of games and I was happy for those games. It gave me an opportunity to be traded, teams could see me play.”

Joining a Flyers team that’s on the verge of making the playoffs — and could be a dangerous team in the postseason — was exciting.

“It’s fun to be with this group, we have a chance to make the playoffs and if we’re going to play the way we’ve been playing, we have a real good chance,” Mrazek said.

The Flyers have the opportunity to qualify Mrazek, a potential restricted free agent, at $4 million this summer. If they don’t — and the Red Wings didn’t appear eager to do so, which was one of the reasons they dealt Mrazek — Mrazek will become an unrestricted free agent.

Given his potential, and ability to get red-hot, Mrazek could be an interesting option for teams — including, again, the Red Wings (but at a reduced salary).

Mrazek already has won five games with Philadelphia, one of the conditions of the 2018 draft pick (the other is the Flyers making the playoffs), which is likely to make June’s draft pick a third-rounder for the Red Wings.

Mrazek continues to stay in contact with some of his former teammates, although his best buddy, forward Tomas Tatar, was traded to Vegas shortly after Mrazek was dealt.

“We were playing in Montreal (on trade deadline day, when Tatar was traded) and I woke up in the afternoon and he texted me and said he couldn’t believe it happened,” Mrazek said. “I didn’t know what happened, but I called him right away and he told me. I was excited for him.

“I’m still in contact with the guys. Frkie (Martin Frk), I talk to him, I talked to Abby (Justin Abdelkader) a few times. I’m in touch with the guys.

“I don’t know who has the advantage (Tuesday). I saw Double-A (Andreas Athanasiou) before the (morning) skate and asked him if he has chance on a breakaway if he’s going to do the same move he always does or go backhand?”

The Red Wings were expecting to see the best of Mrazek, knowing his competitive nature.

“He can say it’s just another game but knowing his competitiveness, I’m sure he’s pumped to play this game,” Blashill said. “I figured he’d be starting, and I’m sure we’ll see his best.

Said Frk, one of the Mrazek’s closest friends on the present Red Wings roster: “He’s looking forward to it. He was a Red Wing for a long time. It’ll be a special moment for him. But for us, too, playing against him. You want to get a win for sure. You don’t want to give him anything too easy.”

But, just like Tatar came over the Golden Knights a couple of weeks ago to Little Caesars Arena, there is a tinge of disappointment seeing a former, longtime teammate in a different uniform.

“Like Tats, it’s tough to see someone go that you’ve been with quite a while,” forward Gustav Nyquist said. “But it’ll be fun to play against him.”