Filip Zadina, Joe Veleno fall to 'ecstatic' Wings in Round 1

The expectation of the Red Wings taking a defenseman was erased when they selected winger Filip Zadina at No. 6 in the NHL Draft.

Filip Zadina, Joe Veleno fall to 'ecstatic' Wings in Round 1

Filip Zadina poses after being selected sixth overall by the Detroit Red Wings during the first round of the 2018 NHL Draft at American Airlines Center on June 22, 2018 in Dallas, Texas. Bruce Bennett, Getty Images
Fullscreen

Filip Zadina (18) of Czech Republic celebrates his goal against Canada in the first period during the IIHF World Junior Championship at KeyBank Center on January 4, 2018 in Buffalo, New York. Zadina was selected sixth overall by the Detroit Red Wings during the first round of the 2018 NHL Draft. Kevin Hoffman, Getty Images
Fullscreen

Filip Zadina high-fives fans as he arrives for the first round of the 2018 NHL Draft at American Airlines Center. Zadina was selected sixth overall by the Detroit Red Wings during the first round. Ron Jenkins, Getty Images
Fullscreen

Filip Zadina poses after being selected sixth overall by the Detroit Red Wings during the first round of the 2018 NHL Draft. Bruce Bennett, Getty Images
Fullscreen

Filip Zadina poses after being selected sixth overall by the Detroit Red Wings during the first round. Tom Pennington, Getty Images
Fullscreen

Joseph Veleno poses after being selected No. 30 overall by the Detroit Red Wings during the first round of the 2018 NHL Draft. Bruce Bennett, Getty Images
Fullscreen

Joseph Veleno, the Red Wings; second pick of the first round, speaks to the media after being drafted 30th Friday night in Dallas. Ron Jenkins, Getty Images
Fullscreen

Defenseman Jared McIsaac, of the Halifax Moosheads, was the Red Wings' second pick of the second round, at No. 36. Minas Panagiotakis, Getty Images
Fullscreen

Alec Regula, of West Bloomfield, was the Red Wings' first pick of the third round, No. 67 overall, on Saturday. Kevin Hoffman, Getty Images
Fullscreen

Ryan O'Reilly, who was taken with the 98th overall pick, lived in Novi and spent time playing in the playing a year in the Little Caesars program. Tom Pennington, Getty Images
Fullscreen 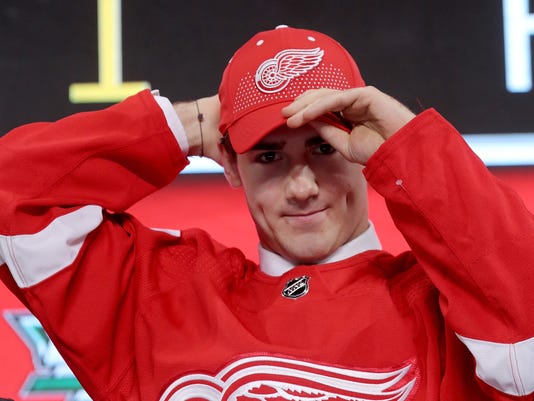 Filip Zadina reacts after being selected No. 6 overall by the Red Wings in the NHL Draft on Friday.(Photo: Bruce Bennett, Getty Images)

So much for all the mock drafts regarding who the Red Wings would select.

The Red Wings were expected to concentrate on defensemen with their two picks in the first round of Friday's NHL Draft, but couldn’t resist the forwards available.

When winger Filip Zadina was available at No. 6, defying expectations, the Red Wings bypassed all the projected defensemen they were going to pick and quickly snatched the native of Czech Republic.

Then, later in the night, at No. 30, they selected Joe Veleno, a center expected to go some 15 to 20 picks higher.

So, what was the reaction of Tyler Wright, the Red Wings’ director of amateur scouting, when the two players were available?

Zadina (6-foot, 197 pounds) is generally considered to be the best goal-scorer in the draft, with an outstanding, accurate shot and an impressive competitiveness on the ice.

Playing with Halifax in the Quebec major junior league, Zadina scored 44 goals and had 38 assists for 82 points.

“We had him very high on our list,” Wright said. “We were ecstatic to tell you the truth.

“He’s not a one-trick pony who could score. He has good hockey sense, creates plays, he’s a good character kid, he competes.

Zadina was thrilled to be selected by the Wings.

“It feels awesome,” Zadina told the media scrum around him, minutes after being drafted. “I feel so happy right now. I am in Detroit and I don’t care what (slot he was picked). I’m a Detroit player.

Zadina was a player the Wings couldn’t pass on, despite a bevy of defensemen available such as Quinn Hughes (Michigan), Evan Bouchard or Noah Dobson.

There is a some belief Zadina could step right into the Red Wings’ lineup in October — although Wright cautioned about rushing the young player.

The first two picks went exactly according to plan, with defenseman Rasmus Dahlin going to Buffalo at No. 1 and Carolina picking forward Andrei Svechnikov at No. 2.

But Montreal chose center Jesperi Kotkaniemi at No. 3 — a selection that Wright said allowed the Wings to believe they could get Zadina — shaking the projected picks, and Ottawa chose forward Brady Tkachuk.

Arizona then surprised most everyone by taking center Barrett Hayton at No. 5, unexpectedly leaving Zadina for the Red Wings.

“Everybody was expecting I was going to Montreal, but it’s the draft and anything can happen,” Zadina said. “I don’t really care about the number (draft pick). I’m just glad to be in Detroit.

“I didn’t fall, it’s just the draft, (but) I was kind of nervous where I would be (picked). But it’s Detroit, and it’s unbelievable.”

One possible reason Zadina dropped in the draft could be some poor physical testing scores at the combine.

Zadina’s confidence also rubbed some people the wrong way. He told reporters earlier in the month he’d like to fill Montreal’s nets if the Canadiens didn’t draft him, and told reporters in Dallas he can’t wait to play against Ottawa and Montreal, teams who passed on him Friday.

“I just want to play and prove to them they didn’t like that decision (not to pick him),” Zadina said. “I’m just glad and I want to prove (to) Detroit they made a good decision.”

“I like the swagger,” Wright said. “He has to make the team first. This is step one. Step two is the work starts now.

"We wanted to add offensive skill to our lineup.”

This was the Wings’ highest selection since they took Keith Primeau third overall in 1990.

At No. 30, the pick acquired from Vegas in a trade deadline deal for Tomas Tatar, the Wings selected Veleno.

“We had him extremely high on the board,” Wright said. “We wanted to target centers. I don’t want to make comparisons but he skates like Dylan Larkin, he plays the game like Dylan Larkin. “

Veleno admitted he was getting a bit nervous sitting and waiting to hear his name called.

“A little bit,” Veleno said. “But I was nervous the whole way through the draft, and excited at the same time. Hearing your name called is pretty special. I was just waiting for the opportunity.

“It’s a great spot for me. It’s such a great, historic franchise. The organization knows what they’re doing, they bring up players pretty well. I’m excited.”

The Red Wings have nine more selections Saturday, including two in the second round and three in the third round.

Scouting report: Projected to be one of the top five players selected, Zadina dropped to No. 6 where the Red Wings quickly grabbed him. An elite goal scorer, Zadina has a great shot and is an outstanding skater. He’s extremely competitive, and is an underrated passer. He can improve defensively, and needs to get stronger along the boards. Didn’t test consistently well physically at the draft combine.

Scouting report: Projected to be a drafted somewhere in the 10-15 range, Veleno dropped to the Red Wings at 30. Looking for defensemen, the Wings couldn't pass on Veleno. He began playing in the Quebec junior league at age 15, but never really matched the hype or expectations that were placed on him. A good playmaker, scouts also love his character and leadership qualities.