The 20th overall pick in the 2016 draft in seeking to make Red Wings team out of training camp.

Detroit — Dennis Cholowski knows the Red Wings did not draft as many defensemen over the weekend as they had intended.

Three of the team's 10 picks were defensemen: Jared McIsaac, second round, No. 36 overall; Alec Regula, third, No. 67; and Seth Barton, third, No. 81. Cholowski said he recognized the call.

“I’m embracing it for sure,” said Cholowski, who looks and sounds three or four sizes bigger than when the team drafted him in the first round, 20th overall, in 2016.

“When I saw that, I was: Get on my horse and get going. Because, you know, I think I’m next in line.”

Cholowski wants to make the team out of training camp.

“That’s the goal, the Red Wings this year,” he said. “And I’m going to do everything I can to do it.”

Playing in major junior hockey last season for both Prince George and Portland of the Western Hockey League, Cholowski scored 14 goals and 52 assists for 66 points in 69 games. 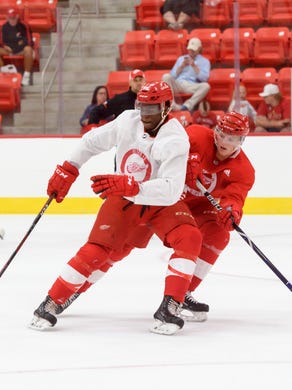 Red Wings director of player development Shawn Horcoff talks to the players about the drills they will be doing. David Guralnick, Detroit News
Fullscreen 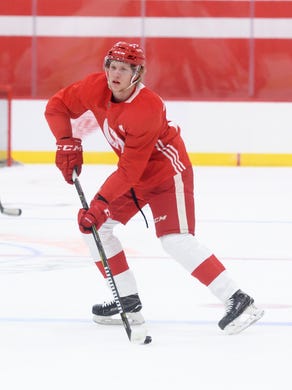 “My season was good in the WHL,” he said. “I thought I put up some good numbers.

“Then I went to Grand Rapids and I got to play a game, which was fun. And I got a little bit of experience there.

“And it was a playoff game, too. and that helped a lot. Just being around pros, that always helps.”

The Wings have asked him to be more assertive with the puck.

“I think my season was really good for improving that,” Cholowski said. “And I’m going to carry that over into camp and then into the season.”

Joe Veleno might well have gone significantly higher than 30th in the first round in this month's draft were it not for the wealth of defensemen available and a little bit of an uneven season, which was split between Saint John (N.B.) and Drummondville (Que.) of the Quebec Major Junior Hockey League.

“I think there was a little bit of up-and-down, last year,” said the 6-foot-1, 185-pound two-way center from Montreal.

“You know, I kind of found my game after that.

“My season was pretty good,” Veleno said. “But I don’t think I was consistent enough throughout the season.”

Veleno is a fast skater and fine playmaker, who can account for a lot of defense, which the Wings expect from their centers.

“But, it’s his skating,” he said. “You can tell right away he’s an effortless skater, and skating goes a long way in today’s game.”

A surer bet to make the Red Wings out of training camp than Cholowski is Michael Rasmussen, the 6-6, 220-pound center from Surrey, B.C.

After the Red Wings gave him a long look in an effective preseason last year, Rasmussen went on to score 31 goals and assist on 28, for 59 points in 47 games for Tri-City of the WHL.

Along the way, Rasmussen had wrist surgery, so he could be ready for this NHL season.

“Overall, it was a positive year,” he said.

“I was definitely in a lot of pain, there, for a bit. But I’m glad I got it done, and now it’s fixed. So, I’m just looking ahead, and that is good.”

Moving from center to wing, Rasmussen said it took only a few games to make the adjustment. He said he is aware that Dylan Larkin moved to the wing for many of his early games, easing his way into the NHL.

He feels he improved, last season.

“I think just consistency and playing with pace, carrying it through the neutral zone,” Rasmussen said.

“I played with speed, and my game just went up.

“I’m just trying to do my best, to be ready for my opportunity.”