NHLers like Larkin among reasons local hockey league is special 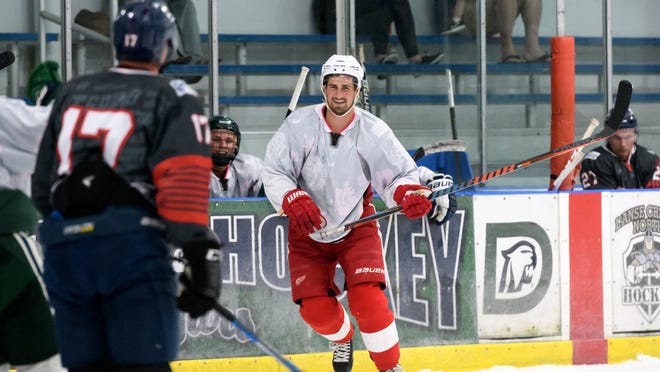 Mount Clemens — The idea was hatched 10 years ago by Steven Oleksy.

Oleksy, from Chesterfield Township, is a pro hockey player who has won a Stanley Cup with Pittsburgh and is currently in the Anaheim Ducks’ organization.

Oleksy wanted to stay sharp and in game shape in the offseason.

“The college guys, pro guys, they can’t just go back and play in a regular senior league,” Oleksy said. “So what do you do to stay in game shape?”

Oleksy, 32, believes southeast Michigan has some of the best hockey talent anywhere in North America. So, why not gather a lot of that talent in one rink?

“I wanted to create something to bring everyone together,” said Oleksy, who started the Eastside Elite Hockey League. “It took some time to build it to where I wanted it to be. But what it’s become over the last 10 years is absolutely incredible.”

When Oleksy began he had eight teams with about 10 players on each roster.

“And I was lucky if I got six guys to show up for a game,” Oleksy said.

This summer, with the league approaching the midway point of its schedule, Oleksy has 15 teams and about 13 skaters and a goalie per roster — approximately 250 players competing in one of the best summer hockey leagues in the country.

The league has a seven-week schedule that runs from mid-June to the end of July, with playoffs and an All-Star Game.

“Incredible,” Oleksy said of the growth. “I’ve had to turn guys away.

“I had a guy from South Bend drive four hours each way for the games a few years ago. We had six or seven guys who were drafted (last month into the NHL). We have six or seven guys from Bowling Green that come and play every year.

Red Wings in the house

Such as Dylan Larkin, his brother Colin, and their cousins Adam and Ryan, who all skate on the Tattoos by Loaf team.

Danny DeKeyser has played for several years, and Luke Glendening and former Wings defenseman Xavier Ouellet have been regulars.

Former NHL star Sergei Samsonov skates on a team that retired Wings Hall of Famer Igor Larionov put together, which has Larionov’s son along with Todd Bertuzzi’s son.

“That team was short of players one night, so Igor and Todd Bertuzzi actually dressed and played,” Oleksy said. “It was awesome.”

“It’s a no-hitting league and in 10 years everybody has respected that rule,” Oleksy said. “Everybody respects that guys are playing for something more in the real season. But guys are playing hard without the hitting. All the plays are happening so fast without the hitting, and with that, the Triple-A guys get to play with the NHL guys and it’s great for them, they benefit from playing with the older guys.

“So when the younger guys go back to their team, confidence-wise, it’s great for them knowing they played with Dylan Larkin or Danny DeKeyser, and on the other side, us pro guys, we see these young guys and how good they are, and so fast. You have to keep up.

“The guys in the league make this league what it is.”

Oleksy has added a Tier-2 summer league, and until this season had a women’s league, which has made Mount Clemens Ice Arena a summer hockey haven.

DeKeyser and Larkin have mentioned often how the EEHL is a great way to stay in hockey shape and they value friendships that are formed in the league.

That’s something Oleksy wanted to establish.

During the Sunday games, there’s usually a barbecue taking place, with players milling around and watching games, while rekindling old acquaintances and making new ones.

“Every summer it’s like a family atmosphere,” Oleksy said. “Guys have come back and reunited. Brothers, like the Larkins, get to play with each other.

“A couple of years ago, we had a couple guys matched up against each other in the playoffs, and after they were done beating the crap out of each other, they came back here for the summer and, it’s just the nature of hockey, you just put your differences aside, and they were on the same team.”

There are referees from the pro and college ranks, but no coaches in the EEHL, with players running their own benches.

“It’s self-governed,” Oleksy said. “It becomes monotonous when you have a coach on your back all the time, it takes the fun out completely. This way, it forces guys who aren’t leaders to step up and lead. It puts you in different situations, so when a guy on a team is taking too long a shift, normally during the season you’re not a guy who speaks up and says something. But in the summer you’re going to say something and that helps you grow as a player and person.”

Oleksy attended L’Anse Creuse North and Lake Superior State, and has played 73 games with Washington and Pittsburgh in the NHL. He is under contract for one more season in the Ducks’ organization.

Oleksy wants to take a measured approach regarding the growth of the league.

A golf outing July 30 at Great Oaks Country Club benefiting four causes close to players in the league — ALS, concussions, Special Olympics, autism — has been added in recent years, and sponsors have been brought on board.

But Oleksy is hesitant about adding teams in the near future.

“I don’t want the quality to diminish just to grow it,” Oleksy said.

It’s fitting that Oleksy is nicknamed “Commissioner” around the rink, and to see how this league has flourished over the years gives him special satisfaction.

“I kind of love that,” Oleksy said of the nickname. “It’s kind of crazy when you talk to the guys and how much they look forward to this league. Last year Larkin’s team won it (the playoffs) and they were parading the trophy around.

“Guys take a lot of pride in it, and that’s what makes the league what it is.”