There are four defensemen who often are linked to the one open spot on defense the Red Wings have. Libor Sulak is the unknown among the contenders. 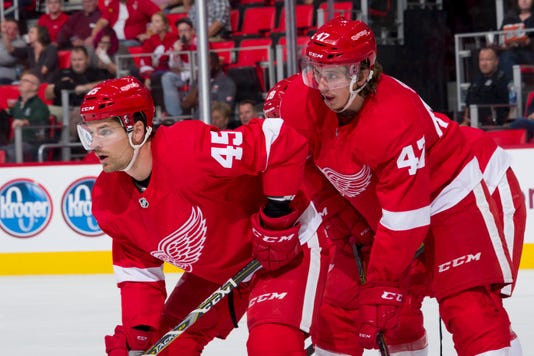 Libor Sulak (right) likely is one of four defensemen vying for one spot on the Red Wings.(Photo: David Guralnick, Detroit News)

Detroit — Libor Sulak is the unknown among the contenders.

There are four defensemen who often are linked to the one open spot on defense the Red Wings have.

Dennis Cholowski is the former first-round draft pick who is coming off a great junior season. Filip Hronek was outstanding the second half of last season after getting acclimated to pro hockey in Grand Rapids. Joe Hicketts has shown he’s capable at Grand Rapids, and energized the Wings during a brief stay in the NHL.

Sulak, though, is the wild card.

He’s 24, from the Czech Republic, and played professionally in Finland last season, after signing as an undrafted free agent with the Wings in May 2017.

At 6-foot-2, 210 pounds, Sulak has a good frame and his offensive talents currently are ahead of his defense.

“Good skating, good play in last season’s game, and I have more experience,” said Sulak, of some of his strengths, of which English isn’t quite there yet, but also has improved over time. “I feel like (I’m) better than last year.”

Sulak had 32 points (nine goals, 23 assists) in 42 games playing for Lahti last season, then took a big step forward with his performance at the world championships.

Sulak had three points in eight games while representing the Czech Republic. But it was his ability to hold his own while playing against many NHL players that gave Sulak, and the Red Wings, optimism heading into this training camp.

“I think so,” said Sulak, on whether the world championships instilled confidence. “Playing a lot of guys in the NHL, it was good experience for me. I know (I could) play against (NHL) guys. I hope I play good here.”

Coach Jeff Blashill has remarked on Sulak’s mobility, a hard shot, and his intelligence on the ice, all attributes that could serve Sulak well at the NHL level.

How well, or quickly, Sulak adjusts to the smaller NHL ice surfaces will be a crucial factor.

Sulak played two games with Grand Rapids toward the end of the American League season had had two assists, with a plus-2 plus-minus rating.

“It’s a little bit different,” said Sulak of the smaller ice surface. “Different than Europe. (But) I feel good on small rink. We’ll see in the pre-season games. We’ll see how I look.

“Play good defense, box out (people), and play good in the defensive zone. That’s my job.”

With Henrik Zetterberg (back) unavailable to play, Dylan Larkin essentially moves up to being the No. 1 center.

It’s a role Blashill feels Larkin is more than ready for.

“Larks spent lots of time last year as the No. 1 center,” Blashill said. “It was 50-50 in terms of who was kind of getting those types of minutes. Larks would certainly have had as big a matchup as Z at any point. He’s prepared for it.

“He had a real good year last year, he took a huge step to being that two-way player that I think he can be where he’s real good defensively and yet put up 60-plus points. I’d like to see, he’d like to see, can he get up to that 70ish range or higher and continue to work on his defensive game.”

Taking those steps higher, Blashill said, will not be easy.

“This will be another hard step for him,” Blashill said. “As you get up the pyramid, those steps get harder and harder. So I hope he can take another one here this year and we’re going to need him to.”

...The Wings open the exhibition season Wednesday at Little Caesars against Pittsburgh.

… Blashill is excited about 6-foot-5 forward Michael Rasmussen’s potential as a net-front presence.

“He was an excellent net-front presence in the prospects tournament,” Blashill said. “He’s a huge man who has good hand-eye and has good ability to position himself.”