Howard ready, but workload could be decreased by Wings

The Red Wings open the exhibition season Wednesday at Little Caesars Arena against Pittsburgh and nobody might be more excited about it than Jimmy Howard.

Howard ready, but workload could be decreased by Wings 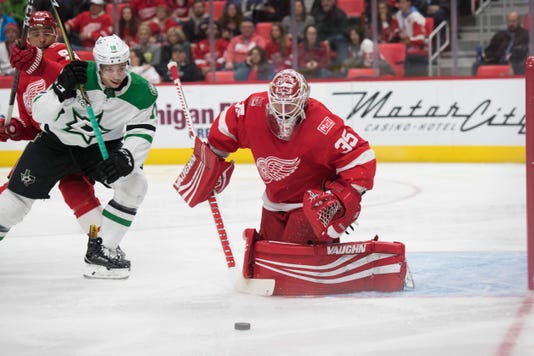 Wings goalie Jimmy Howard played in 60 games last season, finishing with a record of 22-27-9 with a 2.85 goals-against average and .910 save percentage.(Photo: David Guralnick, Detroit News)

Traverse City — Goaltender Jimmy Howard is ready for some games.

The Red Wings open the exhibition season Wednesday at Little Caesars Arena against Pittsburgh and nobody might be more excited about it than Howard.

“I’m looking forward to finishing up here (in Traverse City) and getting into games,” Howard said. “I feel I’ve gotten better every single day on the ice and more and more comfortable on the ice in my new equipment, the chest protector, all of that.

With Petr Mrazek and Jared Coreau both failing to string together any sort of consistency last season, coach Jeff Blashill went to Howard early and often.

More: Tyler Bertuzzi sticks, but can he soar with Red Wings?

Howard’s performance wasn’t as sharp in the final weeks, the heavy workload possibly having an effect. Blashill wants to make sure that doesn’t happen again, and the signing over the summer of goaltender Jonathan Bernier should help keep Howard fresh.

“Jimmy has been a really good goalie for us for two years, without question,” Blashill said. “But I had to overwork him last year. I’d like to stay away from any one goalie playing 60 games.

“I’d like it to be closer to that 50-30 split because the games are so close and they have to be on their game so much. There’s zero room for error at the goaltending position. If you get that 50-30 split, it makes more sense.

“But I’m also going to watch. Ultimately guys decide who plays more based on their play over a period of time. But certainly Jimmy has been great for us for two years.”

Bernier has been open about his desire to push for playing time, thereby raising both goaltenders’ performance.

Howard is fine with the healthy competition from within.

“We need to have that working relationship, we have to push each other,” Howard said. “But at the same time we’re teammates and we’ve got to support each other. We’ve got to be there for each other to bounce things off each other.

“At the end of the day we’re the ones sitting back there and sometimes it can feel like you’re on an island. It’s important to have a partner you can bounce stuff off.”

That still led the Wings, but proved a bit disappointing for the big forward.

Getting to 30 is back on Mantha’s to-do list this season.

“Obviously I didn’t reach it, so it’s the same goal this year,” Mantha said. “I want to be a big body in front of that net and get those extra goals that last year didn’t come.”

Much has been talked about this training camp about Henrik Zetterberg’s retirement and the resulting minutes that Zetterberg played and will now be redistributed to other players.

Mantha is one player who’d love to have a few more minutes of ice time.

“I want to take a bigger role this year,” said Mantha, whose on the top line with Tyler Bertuzzi and Dylan Larkin. “With Zetterberg leaving, he was playing 16-20 minutes a game. That’s ice time for guys to take. We’re going to battle to get those extra minutes.”

Defenseman Joe Hicketts is listed at 5-foot-8, 180-pounds but it’s debatable whether he’s even that big.

It doesn’t matter, though. Hicketts has been able to star at the junior level, show he’s capable of playing professionally in the American League, and now will begin a battle to win a job on the Wings’ blue line.

Hicketts doesn’t see this obstacle as that much different from every other he’s flattened.

“It’s basically the same every year, come in and earn a job,” Hicketts said. “This year there is that chance (to make an NHL roster). Last year you want to make an impression, but realistically I was prepared with everything that was going on, that it was probably going to be another year in Grand Rapids.

“But this year they’ve got spots open. They’re talking about getting young with guys earning jobs. I’m here with that in mind, to earn a job and prove I can play a full schedule in the NHL.”

Blashill said the lineup continues to be mildly changed but the Larkin line will play Wednesday against Pittsburgh, and Michael Rasmussen will play with Joe Veleno and Justin Abdelkader against the Penguins.

Among the defensemen battling for jobs, Blashill said Dennis Cholowski will be in the lineup against Pittsburgh, while Filip Hronek will play Thursday against Chicago.

Blashill was pleased with how training camp went, and was particularly appreciative of the staff at Centre ICE Arena for a 20th season.

“Our volunteers here are unreal,” Blashill said. “They take unbelievable pride in doing a great job. Sometimes it’s a thankless job, the people in charge can be a pain in the neck because we want it done perfect, and they always take it with a grain of salt and keep doing a great job with a smile on their face. It’s real impressive.

“It’s been a great tandem, Traverse City and Centre ICE and the Red Wings, for a long time and it’s going to be a tandem for years to come.”