Frk gets back to work, hopes there's enough time to impress Red Wings

Frk gets back to work, hopes there's enough time to impress Red Wings 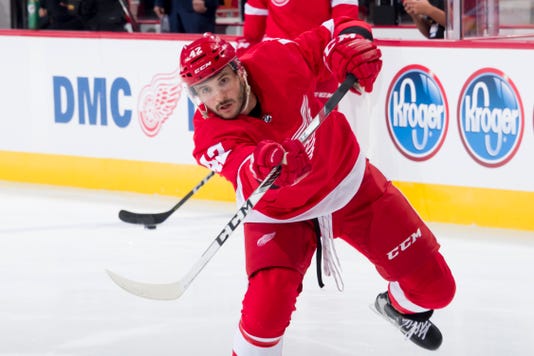 Detroit — Martin Frk was back on the ice Monday, and maybe just in time.

Frk has been battling an oblique injury much of this training camp, and has yet to play in a preseason game.

There are four games left, and Frk could make his preseason debut Wednesday in Boston.

Frk was in a battle to retain his roster spot heading into this camp. Being unable to show what he can do, how he can help this team, until now, makes Frk’s situation all the more precarious.

“It’s hard to make a case for where you belong if you don’t play,” coach Jeff Blashill said after Monday’s practice. “He knows that, and it’s unfortunate that he’s been out. You have to find opportunity to go in and be real good.”

The play of recent first-round draft picks Michael Rasmussen, Evgeny Svechnikov and Filip Zadina have made Frk’s situation that much more difficult.

Svechnikov’s performance last week has pushed him directly into the roster competition, although it’s doubtful he’d be kept in Detroit as the 13th forward and play infrequently, rather than playing full time in Grand Rapids.

“It’s bad timing for an injury, but that’s how hockey goes,” Frk said. “Everything looks fine, and now it’s just getting in the game. It will be a little tougher for me, but hopefully I do good and we’ll see how it goes.”

Frk had 25 points (11 goals) in 68 games last season, showcasing a powerful right-handed shot that is as strong as any in the NHL.

But the rest of Frk’s game remains a bit raw, in particular on the defensive end, where Frk will pay particular attention this week.

“It’s not always about the offense, but also what I can do for the defense, back-check and be good in the defensive zone, too,” Frk said. “That’s what Blash wants, and I have to do these things and then we’ll see how the games go.

“For sure I have to use my shot. Hopefully I can score some goals and be good on the power play.”

Frk signed a one-year contract in June for $1.05 million, and has stated on several occasions he wants to prove he belongs in the NHL.

“I put in almost four months of working out,” Frk said. “I said to myself, I need to be in good shape and be ready, because I know it’s a big year. I knew (the Red Wings) would have a lot of picks in the draft, so there will be a lot of new players.

“You want to earn your spot because they want to take your spot. You want to be good every day, work hard and you’ll get rewarded.”

Blashill said the race for roster spots on defense continues to be wide open, but did offer an interesting summary of where things stand at the halfway mark of the exhibition season.

“Hicketts, probably, has been the best of the group so far,” Blashill said. “I thought (Sunday) was Hronek’s best game, he can produce offense. It’s a good thing those guys are really pushing (each other).

Forward Joe Veleno, the Wings’ first-round pick at No. 30 overall last June, was sent back to his junior team in Drummondville.

“He’s a good transporter of the ice, from one end to the other,” Blashill said. “He can create space and he makes a lot of plays in small areas.

“That can be important in the NHL.”

Defensemen Jonathan Ericsson and Danny DeKeyser and goalie Jonathan Bernier are all out with “tweaks,” Blashill said, which will keep them out of the next game or two.

Of Bernier, Blashill said. “I don’t know whether he’ll be available for either of the next two games. He’s pressing to play, It’s nothing huge, but enough that it’ll keep him out right now.”

Outlook: The Red Wings defeated Chicago last week at home, with the Blackhawks bringing in a largely young roster. Expect the Blackhawks to dress a veteran lineup at home.