The roster the Red Wings will use Thursday when they open the season against Columbus is pretty much set. Pretty much. Not quite entirely, though. 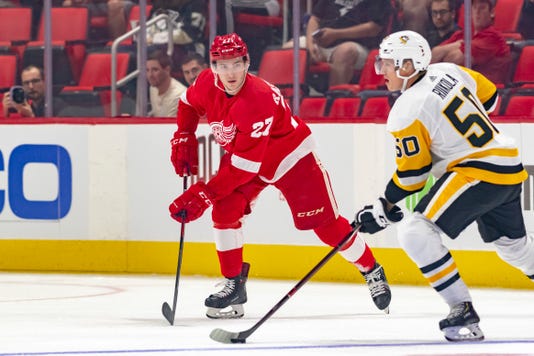 Detroit — The roster the Red Wings will use Thursday when they open the season against Columbus is pretty much set.

Pretty much. Not quite entirely, though.

Other than that, the Wings made various moves Sunday that gets them down to the final 23 men on the roster.

As expected, forward Michael Rasmussen and defenseman Dennis Cholowski are staying with the Red Wings.

Forward Christoffer Ehn, a long shot entering camp, basically beat out Dominic Turgeon and Luke Witkowski for one of the final roster spots.

Also, Filip Zadina, the first-round pick from June’s draft, will begin the season in Grand Rapids, as was expected given the way his camp was trending.

And Evgeny Svechnikov, whose camp was interrupted by injuries, is in bit of a limbo.

Coach Jeff Blashill explained about these moves in broader scope after Sunday’s morning practice, as the Wings began getting ready for the season opener.

Rasmussen and Cholowski, both former first-round draft picks, looked very good during the prospects tournament, then never faded once the preseason games began.

More: Krupa: Red Wings should be fearless with roster decisions

Each dictated they be on the roster by the way they performed.

“They made the argument they make the team better,” Blashill said.

Rasmussen showed he can play in a variety of roles, and his net-front presence, in particular, could have a huge effect on the power play.

“I just try to play my game and help the team every night,” Rasmussen said. “The work is just starting.”

Cholowski’s ability to move the puck, and his work on the power play, particularly getting a shot through and getting pucks on net, were consistently impressive.

“I just focus on me and my goal was to be here opening night,” Cholowski said. “I achieved that, and I’m very happy about it.”

Cholowski was a mild surprise, only in the sense he had minimal pro experience heading into training camp.

“I like his skill set and that he’s good at we need,” Blashill said. “Pro experience matters, but so does talent. Talent matters always.

“It’s an every day league, like we told both of them,” Blashill said. “There are no guarantees in this league.”

Ehn, 22, is a 6-foot-3, 181-pound primarily defensive forward who has shown he’s ready for the NHL. He's played in Sweden since he was drafted in the fourth round in 2014.

Ehn came over to Grand Rapids before the AHL playoffs last spring, was supposed to be in the lineup, but contracted mononucleosis and never played.

Blashill has been impressed by the defensive play, skating, and instincts on the ice. With Ehn, Blashill said the Wings have the ability to roll four lines.

“I said to (general manager) Ken Holland last week I want to make sure we have four lines I can play and trust and put any line against anybody at any time,” Blashill said. “With Ehn, over the course of six or seven exhibition games, he really showed he knows how to play the right way and manage his game.

“He went up against some of the best players in the world, he went 1-on-1 against Evgeni Malkin and held his own. He’s a real good player who skates well. He’s made a good impression.”

Ehn has played in the Swedish Elite League, against top players in that country, so he wasn’t completely overwhelmed seeing NHL competition.

“I’ve felt real good in games,” Ehn said. “I just wanted to keep that momentum and give myself a chance.”

Witkowski was waived Sunday and could be sent to Grand Rapids if no NHL team picks him up.

Green (virus) is definitely out.

So with Cholowski already in the lineup for sure, defensemen Joe Hicketts, Filip Hronek and Libor Sulak will sit and wait for several days to see how the veterans feel.

“We don’t know who will be healthy come Thursday,” Blashill said. “Daley and Ericsson are questionable, Kronwall left the ice early, he’ll be questionable. Greener is out, so if those questionable guys, if they don’t play, we’ll need all of them (the young defensemen).

“If they are healthy, what’s the best fit might come down to it. We’ll just keep them around and make the decision as we get closer to Thursday.”

Originally, the plan was for one young defenseman to make the roster. That would be, theoretically, Cholowski.

With Green out for the opener, that means one more young defenseman is needed. Then, it’s a matter of how many of the veterans will be ready.

At this point, Zadina is better off going to the minor leagues and learning and developing his game.

“He’s a very mature young guy; I’ve been very impressed with his maturity,” said Blashill, who added it wasn’t a difficult decision. “He understands we’re doing everything we can to put himself in the best position to be a great player here.

“He didn’t play so well that he was better than other guys by any stretch. He showed signs of being a really good player. (But) if you compared his camp and (Dylan) Larkin’s (three years ago), he (Larkin) demanded he was on the team, where it’s been more with Zadina of signs that he could be a good player.

“The American League is a hard league, it’s one thing we cautioned him, don’t think it’s going to be easy, it’s going to be real hard. But go down and let’s figure out the space (on the ice), let’s gain that confidence, let’s get adjusted and hopefully fill the nets down there.”

Svechnikov, another former first-round pick, was hurt earlier in the week, then was hurt again during Saturday’s preseason finale against Toronto.

Blashill said the Wings will wait until Thursday to see how Svechnikov is feeling physically, and decide where he’ll best fit — the Wings, or the AHL.

“As we get closer to Thursday we’ll see where he’s at and we’ll make that decision,” Blashill said.

The Wings released forward Jussi Jokinen from his professional tryout.

Forwards David Pope, Givani Smith and Turgeon, along with Zadina, were assigned to Grand Rapids.

Defenseman Vili Saarijarvi, who was impressive throughout the month of September, and goalie Harri Sateri, also were assigned to the Griffins.